This week, I broke out of my mid-week running routine, trading my usual run-from-home routes for something a little more interesting.

And Sunday, I was reminded of the importance of checking not only the course map, but the elevation chart of a new run before setting out on a new trail.

I considered doing a short little workout to make up for the bit of the workout I bailed on yesterday, but I decided to take my own advice and not try to ‘make up’ lost workouts.

I did some extra stretching this morning, and took a longer lunch-time walk, but no extra strength work.

Today was my getting-to-be-annual tradition of running over to watch the Warriors victory parade. Im admittedly not a huge basketball fan, but i do love a good parade and im always up for reasons for Oakland to celebrate together. I also love that Oakland repurposes burning man installations as floats for city workers. #onlyinoakland #dubnation #seenonmyrun

I confess I don’t care about basketball.

I’ve tried. Again this year I tried to watch the NBA finals, but I just couldn’t make myself care. My level of interest notwithstanding, the Golden State Warriors once again won the NBA championship.

While I don’t care about basketball, I do love a parade, and the Warrior’s championship parade is less than a mile from my house, so I decided to time my morning run so it ended at the parade route as it was starting. It was fun (although the parade seemed super slow). I probably would have enjoyed it more if I knew the players.

I kept an eye out for the Ocho Chocolate people who at last year’s parade handed out bags of free candy, but they were not to be seen.

I’ve done all of the NTC workouts (or at least started them), but I don’t feel like my heart has ever been in it.

I need to regroup on my strength training options for after this program ends.

Perfect morning to hit the trail- clear blue sky, a light breeze and redwoods. What more could a girl want? I'm continuously amazed by the presence of huge redwood-filled park in the middle of Oakland #ihellarunoakland

I wanted to start doing mid-week trail runs, so here I am! Wednesday seems like it will be a good day for my mid-week trail runs. Tuesday/Thursday runs are usually shorter and I just can’t get used to the idea of driving somewhere for a 3-4 mile run. But Wednesdays are a bit longer so I don’t feel quite as bad.

I went to Redwoods Regional Park. I’m always a little thrown when I run here. It’s beautiful, full of redwood trees and streams, all in the middle of Oakland.

It really busts the Oakland stereotypes.

Today I did a new route (found in the EBRP Trail Challenge book a few years ago). Another winner. It comes in at exactly 6 miles, just under 1000 feet of climbing. All the things I like in a mid-week trail run.

Although in a future running I’ll try running it in the opposite direction. The first half of this route (as I ran it today) is shaded under redwoods, the second half is mostly exposed. I’d like to get the hotter exposed bits done sooner.

A bunch of foam rolling tonight to work out those trail run kinks.

#mailday #wootwoot So proud to be a Trail Sisters Team member! @trail_sisters is all about encouraging women to hit the trails, supporting them while they are there, and generally being an ambassador for the support of trail running. I love introducing runners to the trails and hanging out (even if its only virtually) with like-minded and supportive women. Thanks for the goodies @trail_sisters @uaoutdoor @uarunning @ultimatedirectionusa #trailsisters #teamtrailsisters

I love having good, uneventful runs, but they are hard to write compelling instgram captions for… #thatisntarealproblem #runderful #runstoppable

As seems to be my theme, my Thursday run was uneventful.

I’ve been doing the same 4-mile route regularly and it seems to be getting a little easier, so that’s good.

Then the penultimate NTC workout ‘Better Basics’. A rep-based workout. It also was uneventful.

My big outing for the day was to Safeway. My diet has been a little lackluster lately. It’s been healthy enough, but I’ve been mostly throwing together staples like rice, beans and veggies for a good, but uninspired, meal.

Uninspired won’t cut it. If I’m training for an ultra, I need to fuel properly, So I went through my recipes and pulled a bunch that I can make ahead stick in the freezer.

So Safeway has been shopped and the freezer has been emptied and cleaned and is ready to be stocked with prepped meals.

Did my morning stretching, but other than that, an utter day of rest.

Well… and cooking. First on my stock-the-freezer list was to make picadillo and a batch of the Runner’s World recommended smoky black bean soup which is super easy and great to have in the freezer for a quick dinner.

Broke out my new #teamtrailsisters tank on my run this morning. Felt great on the run. felt great in the gear. Clear blue sky. #everythingisawesome #trailsisters

Went out to one of my favorites for trail long runs – the Briones To Mount Diablo Trail. It goes on forever so you can easily do any distance. Some parts are super hilly, but other bits are flatter and on paved bike trails so it isn’t entirely insane.

Much to my surprise, 2 different dog owners – who had been letting their dogs off-leash (which is allowed in most of the open areas on the trail) – called their dogs back to them and held their dogs as I ran by.

Not because they were being a problem (neither of these dogs were), but out of respect for me as another person sharing the trail.

It is such a small thing, but after running by several off-leash and ill-behaved dogs at Redwoods on Wednesday, it was so refreshing to come across responsible and thoughtful dog owners.

I thought id try a new trail today. I had a map, but not an elevation chart, but seriously, how hilly could it be? I found out. Very, very hilly. Today was more of a fast hike with all of the ups. At least the views were nice. #ebmudtrails #delaveagatrail

There is no single definition of what ‘trail running’ is. A paved bike trail can be considered trail running, as can a single track trail that climbs thousands of feet, so it’s important to know what you are in for before you start.

I decided to try a new trail again today, another chance to use my new East Bay MUD trail permit – the De Laveaga Trail at the Siesta Valley Recreation Area. I have a map of the area, so I knew the course. I, however, did NOT have an elevation chart. It vaguely crossed my mind to look into it, but since I have no issue walking if it’s too hilly, I just went ahead without looking into a chart.

Even in the Bay Area, where hilly trails are not unusual, a course that climbs nearly 1900 feet in 7.5 miles is hilly. And honestly, 1900 feet was way less than I thought it would be. This run was steep from step 1.

If I’m going to do a hilly run, I want to be able to enjoy some part of it.

This run was a bit much for a Sunday back-to-back long run outing.

Diet! My freezer is on its way to being stocked, and the fridge is still full of ingredients waiting to be turned into good stuff to stick in the freezer. 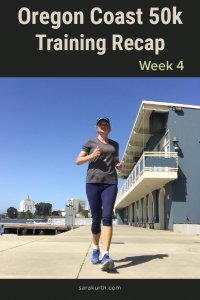