I’ve reached the point in training when the ‘step-back’ weeks aren’t all that step-back. And it’s not gonna get any easier from here.

After a busy weekend of trail races and long runs, i felt like todays rest day was both earned and well-deserved. Stretched and foam rolled, then off to take care of the kittens waiting for their furever homes. Adoptions have been super slow lately- c'mon people, let's find these cuties new homes! #restday #runnersnotrunning

I did do a bit of strength work in the afternoon. I’m gonna use the Sworkit app for a bit for at home workouts.

Today I did the ‘Yoga For Strength’ workout. It wasn’t anything remarkable, but it was a good, straightforward workout. Basically a modified warrior series, so lots of lunges, squats, and planks.

#medalmonday I LOVE this trend of wooden medals! It seems so perfect for trail running. #pctr #saltpointtrailrun #gorunatrail #elevationculture

I must have been running too fast today for my phone to keep up. All my photos were blurry! There's a problem i dont have to deal with very often. 🐌🐢🏃‍♀️

I wore my race shirt from Salt Point today. While I like to wear colored gear and clothes with some personality on the run, I don’t usually wear much super-bright or neon.

While I like this shirt and the color (i’ve predicted ‘electric cantaloupe’ is the color of the season). It is so bright.

I wonder what the loss overhead is for these scooter start up companies. I notice (at least) 1 scooter in the lake every time im there (and they are in different places, so it's not the same one) #seenonmyrun

I considered hitting the trails today, but because of some odd timing of later appointments, I thought I’d better stick closer to home. So I did my go-to 6-mile route, from home to the Jack London Aquatic Center.

While this is my traditional go-to 6-mile route, it says a lot about my efforts to do new routes that I actually haven’t done this route in a long time.

Later in the afternoon, I went to Truve for the stretch class. It was a smaller group than usual (only 2 of us), so we used more gadgets and gear.

I especially enjoyed adding in the TRX. I’m used to thinking about the TRX for strength moves (which we did as well- another upside to it being a smaller class), I forget it can be good for stretching too.

My plan was to do a new-to-me loop, but i missed my little single-track turn-off, so i turned it into an out-and-back. I could have improvised, but there are so many trails in this park- i wasnt in the mood to wander randomly (and maybe get lost). #seenonmyrun

This morning, I headed over to do a trail run at Redwoods Regional Park. My plan was to do a 4(ish) mile loop that was new to me, but I missed the little single-track turn-off that I had planned on taking, so I instead made it an out and back.

I’d considered improvising a new route on the fly. I know the main trails of Redwood pretty well, and I had a trail map with me, but I ultimately decided I wasn’t in the mood.

My map doesn’t always list distances, and the elevation markings are faint and can be hard to read, so it was too hard to gauge what I was (maybe) getting myself into.

Maybe if I was doing a longer run when I knew I’d be able to loop back to my starting point eventually, but my 4-5 mile run just isn’t long enough for that kind of experimentation.

Back to a familiar route this morning- the Briones Reservoir- but i did shake it up and ran the loop counterclockwise for a change. I spent a big portion of the run chasing Karl The Fog away. Every time i got close (he just there over my shoulder photobombing me) he would continue his retreat until only blue skies were left

I headed back out to the Briones Reservoir (nope, still can’t spell it) for my trail long run.

The last two times I’ve run this loop it ran it clockwise. First, because that was the way the loop route had been described to me, the second time I ran it the same way because it was going to be a hot day and I wanted the more shady bit to be at the end.

But today, I ran the loop counterclockwise.

I know, I am such a rebel. It seemed easier counterclockwise, but it wasn’t a fair comparison since there was one other change: every other time I’ve run this course, the trail had a detour (they were doing construction work on the dam by the reservoir), but in the few weeks since I’ve done this route last, they’ve removed the detour!

The detour was pretty, but tough. It sent us down to the Old San Pablo Dam Trail and back which added a mile and about 300 feet of climbing to an already tough course. So regardless of direction, this was an easier route.

The scenery wasn't quite as pretty today as yesterday, but im glad these underpasses exist- they are the reason the Iron Horse Trail is over 30 miles long, giving me plently of options for longer runs. #seenonmyrun

I usually don’t have much of an issue picking routes. I’ll get an idea in my head that I want to do something hilly(ish) or flat(ish), or new or familiar and take it from there. An idea will pop into my head and I’ll go.

Today was the rare situation where I had no idea where to run.

I wasn’t in the mood for a dusty trail. I was bored of all my usual go-to routes, but wasn’t really in the mood to hunt down a new option. I could have created a route from home, but a 10 miler in Oakland running from home would mean a TON of stoplights, which just gets annoying.

Even as I headed down the car, I wasn’t sure where I was going to go.

I ended up heading out to a go-to long run option – the Iron Horse Trail – but instead of heading north (as I almost do) I went south. That route is nearly all sunny and exposed, so I don’t do it all that often, but it was a cooler morning, so it turned out to be a great option.

I tend to do the same sections of these familiar trails, but there is so much more to them. Iron Horse is nearly 30 miles long (one-way!). This is a good reminder that I don’t have to keep doing the same 10 miles.

Mindset. Next Saturday, I’m running another trail race – this time a 30k in Pacifica. Like Salt Point, I have no intention of ‘racing’ it. I’m treating it as a training run with a bib number (thank you free volunteer credits!).

Even so, I know this will be a super tough course- it climbs over 4000 feet. Urgh.

So this week will be about keeping cool and not psyching myself out. 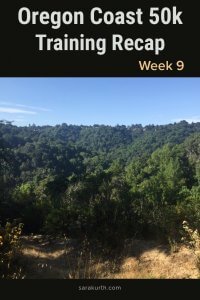