This was another race-as-training-run week as I prepare for the Pacifica 30k. My focus of the week was to keep my mindset in check and try to not freak about the really tough course.

I may have veered too far the other way. 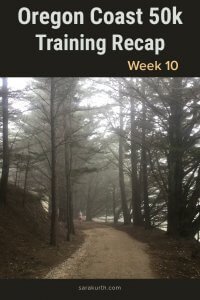 I did a crap-ton of foam rolling this morning, just cuz. Then went to take care of the kittens waiting for furever homes. Little polliwog here is the cutest sleeper we've had in a long time. Every pose she strikes is adorable. #restday #runnersnotrunning

Spent some quality time with my Trigger Point foam roller.

I really focused on stretching and rolling out my feet. I so love the Mobipoint I got at BlogFest. The little nobbly things feel so good on my tired and often abused feet.

Perfect weather for a late morning run here in the bay area. I feel for all of you with high temps and high humidity, i dont miss it. C'mon out to California- we have earthquakes, sky high rent and gridlock, but our summers are sunny and 70!

Today was one of those runs where I don’t have much to say about it. I felt good and the weather was perfect.

I’m to the point where I think my joking about my proper hydration (thanks Hidrate Spark) causing such a good running streak maybe isn’t a joke.

Oakland often gets a bad rap. While it has its problems (as all cities do), it is also stunningly beautiful with trails and redwoods galore. It also has a roaming goat herd clearing the underbrush for fire safety. #ihellarunoakland #runoak

Mentally… well… it wasn’t bad, really, but mentally, I felt a step or two off.

I went up to Redwoods Regional park and did a 6-mile loop (East ridge trail to stream trail), perfect morning for a trail run. It was one of those days where there was a good 20-degree difference between the exposed bits on the ridge and the shaded bits by the stream.

I don’t know if it was the run, or that I’m distracted with my to-do list for a few new endeavors (coming soon to a blog near you), but I for sure didn’t feel like I was focusing on the task at hand on the run.

I always make time for a side trip into the botantical garden. I have a black thumb myself 🌱💀🧟‍♂️ so i can I only appreciate greenery through the work of others. #seenonmyrun

My goal this week was to not freak out and to keep cool about my race this weekend. I think I’ve done too good of job of it.

On my run today, I got thinking about where I should do my long run this weekend. Do I want something hilly? A new route?

I didn’t want to freak about it. Instead, I’m finding myself not preparing for it all.

#fbf To 2006 when I did the San Francisco Marathon. My most vivid memory of that race is they had posted trivia questions along the route. Fun little distraction, right? Except they had put them up in the wrong order. Questions had no answers and answers were randomly scattered along the course #greatideapoorexecution Good Luck to all the San Francisco Marathon runners this weekend! #flashbackfriday #sanfranciscomarathon #sfmarathon

If you read any of my recap posts, you know my rest days are usually pretty mellow. That is especially true the day before a race.

My usual morning stretching and a little foam rolling, then a day of largely sitting on my butt editing videos for YouTube.

Me (a month ago on ultra sign-up): "a 30k that climbs over 4000 feet!? That sounds like a fun challenge." Me (pondering tomorrows race): "Crap" #flatrunner #flatsara #whatdidigetmyselfinto #pctr #gorunatrail #pacificatrailrun

Felt surprisingly good this morning, although i did begin questioning all my life's decisions about 10 miles in (the feeling passed…). A 'hilly' run has been redefined #pctr #gorunatrail #pacificatrailrun #itsalldownhillfromhere #justalittlehilly

A full race recap will be coming on Tuesday, but the highlights:

This is another crazy trail race I’m doing more as a training run with a bib number than a race. It is a super hilly course (climbing nearly 4000 feet).

As I knew I would going in, I walked a TON. A few times I nearly forgot I was doing a ‘race’ or even a ‘run.’ Walking for 2 or 3 miles at a stretch will do that.

There was one point nearly 10 miles in (9.66 miles in to be exact), after walking uphill for what seemed like forever, I did begin to question all of my life choices, but I kept pushing on. My slow and steady approach is perfect for crazy races like this.

In the end, I had a fun time (in a sadistic kinda way) running in perfect summer weather (in Pacifica that means low 60s with heavy coastal fog). What more could a girl want from what is basically a training run?

In the evening, I again broke out the Trigger Point to give my tired muscles a serious rolling out.

Odd vibe on the trail this morning. Egrets in trees (im sure this isn't odd, but i don't recall seeing it) 3 cops on motorcycles passing on the trail (which ive never seen on any trail, ever) and a helicopter circling (not odd, but considering i was listening to a true crime podcast involving a criminal being tracked by helicopter at the time, the timing was a bit eerie). #seenonmyrun

I really didn’t want to run this morning. After the race yesterday, I physically felt fine (thanks, foam rolling!), but mentally, I had zero interest in it.

I stalled a bunch, got some stuff done around the house (I do try to keep my procrastination productive!).

Eventually, accepted that ‘not wanting to’ isn’t a valid reason for skipping a run and I went out to the Iron Horse Trail for a run.

I felt fine (as I knew I would, physically there was no reason not to run), but there was an odd vibe on the trail.

Three times I passed police on motorcycles on the trail (which I have never seen – ever – on any trail), and a helicopter was circling overhead for about 20 minutes, which added a spooky bit of real-life sound effects to the podcast I was listening to about an Australian murder who was being hunted by police (the latest edition of Casefile).

In an eerie bit of timing, the real helicopter was overhead just as the podcast host was talking the suspect shooting at the police helicopter hunting him.

Back to basics. As I’ve been focusing more on increasing endurance and working on hill climbing, I’ve begun to slack a bit on the basics- on-the-run-nutrition and post-run stretching.

I was shocked after Pacifica to realize that in 18 miles I’d only had 1 GU pack and 2 GU blocks (not 2 packs, 2 blocks). I need more fuel than that! While I don’t think it negatively impacted me on this run, it is a bad habit to get into.

I’ve also been slacking with post-run stretching. Too often I finish a run and hop in the shower or hop in the car to head home with little or no stretching.

I need to bust these bad habits before they get too ingrained.