This month has been a good example of why you should review your calendar in its entirety before registering for races. None of my races this month are unreasonable, but back-to-back-to-back is a lot. 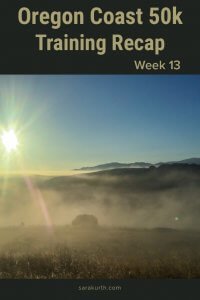 #medalmonday & #mugmonday Happy 10th anniversary to Brazen Racing's Bear Creek! It was their anniversary and we got the extra mug-swag! #bebrazen #bearcreek

I did an extra long morning stretching routine this morning, which always feels really good after a long weekend of back-to-back long runs.

My plan was to do yoga this afternoon, but I just couldn’t make myself do it.

I have no good reasons or excuses, I just didn’t.

Hey everybody, meet my new friend. Ive named him Slappy. Slappy is a super loud eater, but ill try to overlook that since he seems nice. #squirrelsofinstagram

After my run today, I stopped by the botanical/community gardens to film a few YouTube segments. I do some filming during nearly every run, though I don’t often mention it in these recaps since it would get too repetitive (check out my YouTube channel and subscribe if you haven’t already!)

The squirrels in this park have exactly zero fear of humans, and it really is kind of odd. It’s more than just timidly approaching looking for food, they’ve basically climbed on my shoes before.

Today, I was sitting on a bench when this squirrel (who is the star of my Instagram photo of the day) jumps up, plops down a foot a half from me, and happily gnawed away at his twig or root (or whatever he was eating) while I filmed.

I could hear his gnawing in some of the videos.

Today I did my close to home route to Jack London Square.

My biggest takeaway from today’s run is how loud the world is.

I knew I wanted to shoot a few video clips for YouTube (I know, two YouTube shout outs in as many days!?). The botanical garden by Lake Merritt (home of my squirrel friend) is usually a good bet – it’s at the end of my route and it’s usually pretty quiet, but they are setting up for a regatta on the lake this weekend, so it’s super noisy.

I spent 8-miles worth of time today trying to find an alternative.

I couldn’t find one.

Between the usual road traffic, trash and recycling vehicles, road construction, building construction, trains, windy exposed areas, I couldn’t find a single place in the course of 8 miles that was not unreasonably loud.

Didn’t make it over to the Truve stretch class this afternoon, but I did do extra foam rolling tonight. Ahhhhh!

Got distracted on my run this morning watching the first heats of the masters rowing regatta taking place on the lake. Kinda makes me want to try rowing. #runoak #ihellarunoakland

When I do this same route on Tuesday and Thursday, I always notice I feel way stronger on the first uphill bit on Tuesday than on Thursday.

Is it just that on Thursday I’m more tired from having done 3 days in a row of running?

It doesn’t seem like it should make that big of difference considering my weekday mileage isn’t that much.

#flatsara is ready for the Golden State 35k tomorrow. Im a little nervous- its been a long time since ive done a trail race in a totally new area where i have absolutely no idea what to expect. Onward to Fort Ord! #insidetrailracing #insidetrail #goldenstatetrailrun #flatrunner

Only my usual morning stretching and a walk at lunch. Beyond that, taking it super chill.

What a day! LOVED the Golden State 35k! Started in cool fog, ended in blazing sun. Ran right past the signs that said 'trail closed due to munitions removal' – note to self- do not take a single step off the trail! Felt strong (i'm thinkin' my ultra training is on track!). Loved the strangeness of feeling like i'm in the middle of nowhere but hearing the constant roar of racecars at nearby Leguna Seca raceway. So odd. And oh yeah- I won my age group and was the 3rd overall woman. Me! Little ol' middle of the packer me! A top three overall finish is so far from anything that is on my radar as possible. I do love small races of random distances- the surest way to age group glory! #insidetrailracing #goldenstatetrailrun

A full recap will be posted on Tuesday, but the highlights:

I loved this run!

In the days before this race, I got to thinking that it has been a really long time since I’ve done a trail race where I had no idea what to expect. I’ve been doing a lot of repeat races or races in parks or areas I knew lately. This was totally new.

The day started cool and foggy (if not downright cold), but the coastal fog eventually burnt off and it turned into a super hot day. I felt super strong, and get this – I won my age group and was the 3rd overall woman. I didn’t believe it – I made them show me the results.

This course is down near Monterey and is right next to Laguna Seca raceway. There was something brilliantly odd about running in what feels like the middle of nowhere only to have the roaring of race cars just over the hill.

I am soooo looking forward to foam rolling tonight and rolling out my feet with my MobiBall. I was getting little baby cramps in my arches on the way home.

I had a few friends doing the Oakland triathlon (based at Jack London Square), this morning and I wanted to cheer them on so I decided to make a morning of it.

I ran over to cheer them on, hung out a bit, and ran home.

In total, my run was about 8 miles, divided up over the course of several hours.

It was fascinating watching the triathlon bike/run transition. I had no idea there were so many different ways to slow down and get off the bike. I often toy with the idea of doing a triathlon, but the sheer volume of gear required makes it feel like more than I want to take on for an event, but never say never….

It’s a marathon week for me – I’m pacing the Santa Rosa Marathon next Sunday. While it’s really just a training run for me (and I’m not doing anything you’d consider a taper), I am going to keep it chill this week.

Read: I’m still not going to do any strength work, but I’m not going to feel guilty about it or have the idea hanging over my head all week.