It’s yet another race-tastic weekend as I head up to Santa Rosa for the Double Barrel Challenge – running the 5k on Saturday and the full marathon on Sunday.

I decided it wasn’t crazy enough to just run the marathon, so I decided to pace it as well. 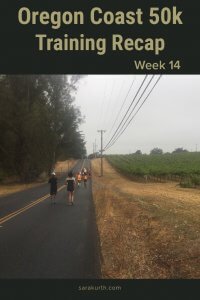 Its a rare double #medalmonday for me- i was first in my age group at the Golden State 35k over the weekend! As a middle of the pack runner, that is beyond rare. My first reaction is to poopoo the win- pointing out it was a small field, or that age group victories say more about your competitors on a given day than your performance, or that you are more than your race stats. All of those things are true, of course, but it doesn't follow that I should discount the wins when they do come. I felt great on Saturday, and i totally rocked it. That would be true if it had been a huge field and i came in 45th, and its true for a small race too. But on Saturday, the stats worked in my favor for a change. #insidetrailracing #goldenstatetrailrun

Tried a new app this morning – ClassPass Go. It’s part of this new trend towards audio only fitness apps.

I’m not entirely sold on them, but I want to like them.

This morning I did the ‘Good Morning Flow’ and ‘Simple Seated Hip Mobility’ workouts. Not bad workouts, but I do occasionally find the audio-only format a challenge.

The verbal cues are usually not bad, but every so often there will be a move where I just can’t figure out what I’m supposed to be doing. Sometimes, a picture really is worth a thousand words.

I am borderline obsessed with these dalhias. A few weeks ago, i discovered these more obscure dahlias (what is the right term- breed? Species? Varieties?) in a random corner of the local community gardens. I now visit them every chance i get. #pefectsymmetry #seenonmyrun

I felt a little more sluggish than I usually do on my Tuesday runs, but it wasn’t anything too out-of-whack.

I suppose it’s just something I should expect when my long run mileage is creeping up and up.

I hit the trails this morning (getting super dusty in the process). I have a long weekend of road running ahead of me – im doing the Santa Rosa Double Barrel Challenge- the 5k on Saturday, then pacing the 5 hour marathon group on Sunday, so id better give some love to the trails while i can.

Went back over to the Old San Pablo Dam trail this morning. I have a weekend full of road racing in store, so I figured I’d better get in a few trail miles while I can.

When I got home, I did the ClassPass Go ‘Stretch It Out’ class, designed for a post-run cooldown. This was the perfect illustration of the issue I have with audio only workout apps.

The moves were great, a solid 10 minute cool down.

However, the instructor drove me insane. I could not have hated her more. When that happens on apps like Nike Training Club, I can mute the audio and still have the visual cues for which move to do and how long to hold it. Maybe I’ll miss a good verbal cue here or there, but not having to listen to an instructor that is driving me nuts is way more important.

But here, there is no option to mute, in fact, I only have audio. I have to listen to this instructor prattle on and on.

Now I’m torn. I’d love to make this workout a more common part of my cooldown, but I can’t stand the idea of listening to her again, so I guess it’s a no-go.

I didn’t like her so much I even looked into if it’s possible to hide all of her workouts in the app. I don’t want to accidentally cross paths with her in the future (note: it’s not currently possible).

The usual loop run. My brain can’t quite wrap my head around the fact I’m running a marathon over the weekend. I’m so used to marathons being such a huge event, with weeks of tapering and prep. Days of carb loading.

While I have upped my carbs, I haven’t been tapering (intentionally). For me, it is just another training run, that happens to have a bid number, and in my case a pacing sign.

#tbt to the Golden State 35k last weekend. I think this is the first time I've ever gotten panoramic race photos! Thanks to @insidetrail for a great race and @thetreadmill_ca for the (free!) Race photos.

Only my morning stretching this morning before I head up to Santa Rosa for the first of three days of marathon festivities.

I don’t do many ‘real’ marathons anymore – road races with expos and ‘no race day bib pick up’ rules. It kinda reminds me of why I prefer little races where you just show up on race day and do your thing.

But at least when you have a real expo there is the chance of freebies! I already got a free pair of Lululemon socks for stopping by their store with my race confirmation.

I can’t even tell you the last time I did a real 5k race. And now I remember why I don’t do them very often.

It’s a blow to the ego to be trounced by 7-year-olds. I was cut off more times than I can count. I got the feeling the race was largely populated with runners that don’t know race etiquette (specifically: you need to leave more than a foot of space between you and the person you are cutting in front of).

But I felt good for this little shakeout run.

Marathon #29 is in the books! This one as the 4:53 pacer for the Santa Rosa Marathon (Santa Rosa pacers are based on BQ times- that's why the super specific time). What can i say? I nailed it (Im good at this pacing thing)! This was the most uneventful marathon ive ever done – that's a good thing- i just started running and stopped nearly 5 hours later. No pains, no twinges, no cramping, almost zero chafing, fueling was on point. A touch of sun would have been nice, but the cool and fog was nice to run in, plus its good for the grapes that will turn into my bottle of wine in a few years.

A full recap will be posted on Tuesday, but the highlights:

I think this was the most uneventful marathon I’ve ever run. No physical pain, no mental ‘wall’, I just plugged away at it for 5 hours with nothing much of note happening (which is a very good thing).

Like Golden State last week, I also had a bit of time warp happening. I sure I don’t feel like I ran for nearly 5 hours.

Consider that a teaser for the upcoming full recap.

Stretching. While Santa Rosa was ‘only’ a training run, I still need to take care of myself post-run and do lots of stretching and foam rolling.