I thought I’d avoid the worst of my usual post-marathon funk after last week’s Santa Rosa Marathon. After all, for me, it was only a training run.

My heart really wasn’t in it this week. 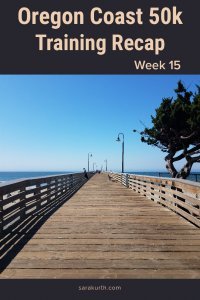 With today's run, I officially designate myself as insane. I ran a marathon yesterday (as a pacer and at what for me is a comfortable pace, but still) and then wake up today to do another 10. I noticed a distinct lack of oomph today (i wonder why), but i overall felt surprisingly good. #youknowyoureanultrarunnerwhen #imgonnatakeanapnow #foamrollersareyourfriend

The major thing that sets ultra training apart from marathon training is back-to-back long runs. Doing one long run followed by another the next day gets your body used to running on tired legs.

Today was the most extreme example.

I ran the Santa Rosa Marathon yesterday, then woke up this morning and faced another 10.

I felt surprisingly good at Santa Rosa, which carried through to this morning. I woke up feeling a touch stiff, but I wasn’t really sore at all. I’ve never not been sore after a road marathon, even when I run them at a comfortable pace.

Must have been all the foam rolling I did last night.

During today’s run, I walked more than I have in a while, but I still felt surprisingly good. Even so, I am sooooo looking forward to tomorrow’s rest day!

Happy #medalmonday a three-fer this week- the Santa Rosa 5k (when did 5ks start giving finishers medals?), the Santa Rosa Marathon (my first free-standing stained glass spinner medal), and the 'Double Barrel' medal for being foolish enough to do both. #santarosamarathon

I did a ClassPass Go class instead of my usual morning stretching – did the ‘Prep For Step’ workout.

It’s intended more as a pre-workout warm-up than a stand-alone class (I should have guessed based on the name), but it was fine.

How can my muscles be more sore this morning (post-rest day), than they were Monday (post- marathon)? I suppose they are confused by being given a day off…

I was surprised when I wasn’t sore Monday post-marathon. I think my soreness was just hanging out waiting to hit today.

I woke up super sore this morning. Not as bad as the usual post-marathon soreness, but really unusual considering yesterday was a (glorious) rest day.

I again walked a lot during my run, but I think my desire to walk was more mental than physical.

Ive been in an odd headspace all week. Sunday's marathon was 'only' a training run, but i still have a little bit of the post-event letdown/funk going on.

I kinda thought that since Santa Rosa was ‘only’ training run, I’d avoid my usual post-marathon funk.

No such luck, but it’s a different kind of post-marathon funk since it is going on while I’m still training. I need to keep on running, even when my heart isn’t in it.

I’ve felt a little out of sorts all week. It’s nothing new, but still is kinda a bummer.

I must be a 'real' trail runner now, I have a lanyard identifying me as one! A lanyard wouldn't lie, would it? #trailconference #trailrunningconference

While I have no race this weekend, I’m still having a little road trip.

The US Trail Running Conference is going on in San Luis Obispo this week. For the most part, it’s a conference for race directors, but they have a ‘Trail Runner’ conference for a half day today.

Even as I’m heading down there, I’m not entirely sure what exactly the conference is, or what to expect.

My review for today's run? A resounding meh. I kind of expected it. I'm still in a bit of a post-Santa Rosa Marathon funk, and on yesterday's SLO road trip to the Trail Conference i didn't eat or drink nearly enough to be properly fueled. I have only myself to blame. At least it was a shorter run so it was over soon enough.

My mind was having none of it.

I slept in later than I knew I should (intentionally – it was a short run, the forecast wasn’t for insane heat, and yesterday was a super early wake up call), but then I still dawdled for waaaay too long before getting out the door.

Once I got started it was fine. There is still a distinct lack of oomph, but nothing unreasonable.

Oddly, when I got done and took off my shoes, my left sock, near my middle toe, was all bloody. I have no idea why. It didn’t hurt at all, I didn’t stub it, the toenail is intact, I don’t see any cuts or anything that would cause bleeding and nothing hurts or is sore.

No idea what that is about.

After feeling a little bit off all week, this morning i stuck close to home and started feeling like myself again. Ahhhhh….

Today’s run was merely ‘fine.’ Which, considering the funk I’ve been in this week, is a step up and cause for celebration.

A start of a return to normalcy (hopefully?).

I feel like i blinked and missed August, but it must have lasted (at least) 33 hours. My Garmin wouldn't lie to me #augustmiles

Mindset. No more wallowing! I need to get my mind back in the game.