As this week began, I had a pretty quiet weekend planned. I was going to run the Drag-n-Fly trail half marathon on Saturday, but other than that, my schedule was open.

But as the week went on, I got a few last-minute SOS requests for help at events over the weekend. I’m too nice for my own good, and I can’t NOT help when it is within my ability to do so, so suddenly, I faced a totally exhausting, pretty-packed (by my standards anyway) weekend. 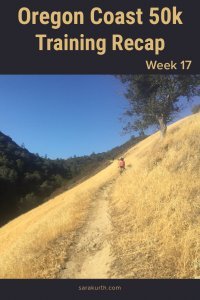 Only my morning stretching and lunch-time walk.

I briefly considered doing more, but my already heavy running week was made a little bit crazier today. My running club needed a substitute pacer for the 2:30 pace group Alameda Half on Sunday.

I better take my rest days where I can get them.

I think the squirrels in this park like me more than most humans. #squirrelsofinstagram #makefriendswhereyoucan

I don’t have much to say about today’s run other than I felt really good. Dare I say it felt easy?

It’s not very often I have average paces anywhere in the 8 min/mile range.

While i had no problem heading out for a run this morning, i was kinda unispired as to where i should go. I ended up sticking close to home and circling (the fairly small) Lake Temescal several times. For such a small lake, it has a surprising number of trails surrounding it.

I had no trouble with the idea of heading out for a run today but I was totally uninspired about where I should run. With my busy weekend of racing coming up, I felt like sticking close to home (I’ll be doing enough driving later in the week), but I don’t have a known 12-mile route from home.

I somewhat randomly decided to head over to Lake Temescal. I had in my head it was 4 or 5 miles over there, so I thought head over, loop the lake (about 2 miles around) and home.

However, I run there and find it’s only about 3 miles away, so I ended up doing 3 or 4 loops of the lake. Luckily, while this is a small lake, there are 2 totally different loops to choose from.

I mixed and matched the trail options so doing multiple loops never got too repetitive.

"It gets easier. Every day it gets a little easier. But you gotta do it everyday. That's the hard part. But it does get easier." Monkey from Bojack Horseman

Only the usual loop this morning.

I’m starting to question the sanity of my back-to-back races this morning, especially now that my weekend was made even crazier.

I was asked to attend the Bay Area Pet Fair by Hopalong (an animal rescue agency I volunteer with) to screen potential kitten adopters. It’s a huge event (our agency alone will have 40+ kittens), and they are concerned they’ll be short-handed. I know they wouldn’t ask at the last minute like this if it weren’t important, so I’ll be heading directly from Drag-n-Fly to the fair.

I’m tired just thinking about it. I guess this is my week to be called in at the last-minute to help.

#flatsara x2! I have back-to-back half-marathons this weekend. Saturday im returning to my trail nemesis- Drag-n-Fly (eek!), Sunday i'm leading the 2:30 pace group for the Alameda Running Festival half. I hadn't planned on Alameda, but i got a last-minute SOS when the scheduled pacer had to drop out. Sara to the rescue! #flatrunner #dragnfly #brazenracing #alamedarunningfestival

Every year I do Drag-n-Fly. Every year it kicks my ass. Every year i say ill never do it again. What kind of voodoo does @brazenracing do to keep me coming back to a race i hate so much!? (But that i admittedly love to hate…). I actually felt pretty good today considering the insane course, and the weather agreed for a change. This is the first time ive ever been to Contra Loma or Black Diamond with highs under 90 degrees. #dragnfly #bebrazen

A full race recap will be posted on Tuesday, but in summary:

However, every time I do Drag-n-Fly, it gets not quite as bad. Largely because I know more what to expect.

This year, it was almost comfy as the temps were in the 70s instead of the usual 90+. That made a HUGE difference.

I walked a ton (which I knew I would) and felt downright amazing in the last mile (after the worst of the hills are done). I love what that tells me about my ultra training, that I really kicked into gear at the end, and that I still had the oomph and energy to do something about it.

After the run, I went to my volunteer shift at the pet fair. It was a fun time, and Hopalong alone adopted around 25 cats and nearly all our dogs (I think around 50). While it was fun, and playing with 3 month old kittens is a pretty easy way to spend a few hours, I do know I was light on refueling, rehydrating, and recovery.

Maybe not ideal in between back-to-back races (but kittens!)

The 2nd half of my 2 half weekend is done! I was a last minute addition to the Alameda Running Festival pace team, taking over the 2:30 spot just this week. After yesterday's insane Drag-n-Fly course, the super flat Alameda course was a welcome change. But a super flat and fast course is not necessarily what a pacer wants- it was tough keeping it steady and reigned in. #alamedarunningfestival

The Alameda Half is a super flat and super fast course.

This is great for runners, not so much for pacers.

While I ended up hitting my time, I had a really hard time keeping consistent. It is soooo easy to speed up when there is zero elevation gain.

I felt great for this run and I was surprised I wasn’t sore or stiff at all from Drag-n-Fly. I guess that’s the upside of walking so much. I didn’t run enough to tire out my running muscles.

It says something for the accumulated impact of the weekend that when I got home, I took a nap.

But my body needed it today.

The worst part of 50k training.