Pacifica is another race (like Salt Point) that I’m treating as a training run with a bib number more than a race. Even so, I hesitated a bit before I registered. A 30k that climbs almost 4000 feet? Did I want to subject myself to that?

I ultimately decided that yes, yes I did want to subject myself to that for a few reasons:

Plus, I still have a stash of free race entries due to my off-season volunteering binge, so at least I didn’t have to pay to suffer.

I’ve run this race before, but this is a different (and much tougher) course, so I don’t really even have a sense of what a reasonable finish time would be. As long as I beat the course closure time, it’s all good.

Wake Up And Drive There

Between my recent drama on the way up to Salt Point a few weeks ago, and the fact that my route to Pacifica will take me across the Bay Bridge through San Francisco, which always has traffic (you can drive it at 2 AM and it’s jammed), and my usual desire to be early, I left super early.

Even with a paranoia-driven generous time cushion, I didn’t have to wake up until 6. That felt luxuriously late for a race day wake up call (my last few races were 3:30 or 4:00 AM wake-ups). I can’t tell you how many times I did the math to make sure it was right.

As expected, there was traffic on the bridge, made worse by 3 cars in the far right lane with blown tires within a 2-mile section (odd, there must have been debris in the road), but no real drama.

Also as expected, I got to the start super early, which is why I always travel with a book! When I got out of the car, my first impression of Pacifica was that it smelled really good. The parking lot is in a eucalyptus grove, and the park was shrouded in coastal fog.

Ahhhhh eucalyptus scented fog! I felt like I was back at Equinox gym (they have eucalyptus-scented chilled towels to use during your workout).

It was damp and chilly at the start (a/k/a what I think of as summer In Pacifica), 54 at the start with heavy coastal clouds/fog.

While it wasn’t raining exactly, it kinda felt like raindrops were floating in the air or like I was walking in a cloud (which I guess I was, scientifically speaking).

The 30k course does two loops, a 21k blue loop (named because it is marked with blue ribbons) and a 9k pink loop (I’ll let you guess why).

A few things about the blue loop:

I find myself thinking: I’m back at the start, my car is right there, I’m super tired, why should I head out again?

But head back out I did. The pink loop heads inland, and can be described in one word: switchbacks.

I’ve been on many hikes with many switchbacks, this one is up there for the most switchback in a mile and a half. Eeeeeeeennnnnddddllleeeessss switchbacks for the final push uphill.

By that point, the fog had burnt off, so the sun was shining and the temperatures very quickly rose. It made me that much happier it was foggy for the entire blue loop.

Favorite Part Of The Course

My favorite part of the course was the bit of it I’d never run before – the bit right along the coast.

You just can’t beat the beauty (and the sound) of running past crashing waves.

On the last uphill push of the pink loop (so many switchbacks!), I got behind a lady that was going just the wrong speed.

If I passed her, she would have been breathing down my neck since I wasn’t that much faster than her. We eventually reached the top and she sped up considerably on the downs. Problem solved.

The race organizers (Pacific Coast Trail Runs) have amazing food at the finish line. It is different for every race (Salt Point had a taco bar).

Today, Chef Yaku (a former contestant on Next Food Network Star who now owns a catering company) made pulled chicken in a BBQ chipotle sauce topped with coleslaw and a salad with raspberry vinaigrette. With a beer, it tasted amazing.

It sounds much more impressive when you leave out the …out of 26, and …out of 6, but who’s counting?

This is a perfect example of why I don’t put too much stock in finish stats: it says more about the field I was with than my performance. Considering how much walking I did, I feel like I have no business ending up in the top 3, but I need to remember ‘normal people’ would never have even signed up for this.

Deep down, in my heart of hearts, I know I could have done this race faster.

I don’t know if I could have run much more than I did, but I could have added a bit more power to my uphill power walk, especially in the last bit of the pink loop when I knew the end was near.

However, this was a training run. There would have been no upside to pushing myself to my limit.

This race shirt was a first – a sleeveless tee! I’ve gotten a few tank tops over the years, but never a sleeveless shirt.

The downside? It’s black. I don’t understand black tech short-sleeve shirts. If it’s warm enough for me to want to wear a short-sleeved shirt while working out, I likely won’t want to wear black, which absorbs the sun and makes me too warm. Oh well! I guess it’s always good to add a new option to the running shirt drawer. 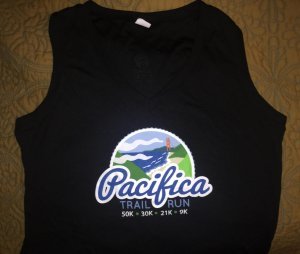 I likely wouldn’t do the 30k again. The pink loop was fine, but it didn’t add that much to the experience.

I would do the 21k (the blue loop) again. It was the much harder loop, but it was also the much prettier loop. Funny how often those two go hand-in-hand.

I have a slightly insane August. I kept signing up for stuff, and now it’s all coming due. In August:

I’m tired just thinking about it. 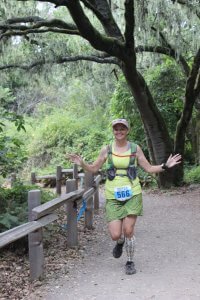 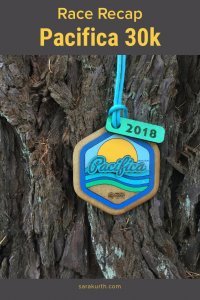