Some runners gauge when they became a ‘real runner’ on finishing a goal race. For others, it’s all about hitting a specific pace. For me, one of the signifiers that I was a ‘real runner’ was that I no longer dreaded the thought of using the porta potty on race day.

Race day just wouldn’t be the same without (at least) one visit to the giant bank of porta potties at the start area. Or a quick stop to one along the race course.

As an aside: of all the coverage of the 2018 Boston Marathon, the story I am most in awe of isn’t Des Linden’s win (amazing), or that she stopped while her fellow runner Shalane Flanagan made a porta potty pit stop (great teamwork!). It was that Flanagan’s pit stop took 13 seconds!

13 seconds!? How is that possible?

Viewer discretion warning: you read the title, you know what this post is about. I’ve tried to not be gross about it, but this post discusses the bathroom and what happens in it.

For most runners, the porta potty is a necessary evil. But with some common courtesy and by following a few rules, it isn’t all that bad. 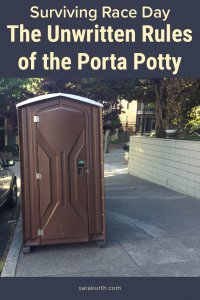 Where Are the Men?

I am 100% in favor of the single line for all approach. Sure, this makes the line look really long, but it also makes the line move much faster. Besides, as a strong believer in Murphy’s Law, I know if I get in a single line/single stall configuration, I will always pick the line with the person who camps out (see below) and the line will never move.

I don’t know why the single line / single stall approach is ever used (I know, my bias showing), but if it is, get in the line that has the most men.

It may be a tired cliché, but in my purely anecdotal experience, it’s the right approach more often than not: The line composed of mostly men will move the fastest.

There is even some science behind it. Women do, in fact, spend more time in the bathroom than men.

Get in, do your business, and get out.

By all means, take as much time as you need to do what you have to do, but don’t camp out ‘just in case.’

If you still have a lot of time before the race starts, but you don’t actively need the stall, exit and head right to the back of the line.

There are hundreds (if not thousands) of other runners who need to use the facilities. Don’t hang out on the pot on the off-chance that you may need to go at some point in the next 20 minutes (this is especially true if you are in 1 line/1 stall configuration).

Many events have races of multiple distances happening on race day. Often, these races start at different times.

If you are nearing the start time of an earlier race, but your race doesn’t start until later, let runners who are starting in the earlier race cut ahead of you (this is usually identifiable on the race bib).

Sure, you got in line ahead of them, but don’t make them miss the start of their race while you still have time to kill.

OK, I know it can be a little awkward acknowledging a stranger as they are about to go into the bathroom, but you’ll survive.

Hold the door open for the person who is about to enter.

It’s a tiny efficiency, but a kindness.

Aim For the Blue

You know that blue stuff at the bottom of the porta potty? That isn’t colored blue just to look good, it’s designed to interact with the, I’ll say, ‘stuff’ within it to inhibit odors.

To the extent you can, get your ‘stuff’ and your toilet paper into the liquid, not onto the pile that is over the liquid (OK, this one was a little gross, sorry).

This will help cut down on the porta potty odor.

Everyone will appreciate that.

It Ain’t a Trash Bin

Only human waste and toilet paper should go into a porta potty.

Feminine hygiene products, diapers, toilet paper rolls, and pretty much anything else can clog up the machines that clean out those bad boys at the end of the day.

If it didn’t come out of you, find a trash can for it.

Clean up after yourself.

It will take you 5 seconds.

What about you? Do you prefer the one line for all or one line per stall configuration?

Note: there is only one right answer to this question 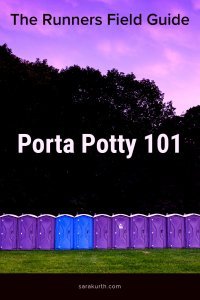