Another round of Puffin Picks – the things making me happy and making me smile this week. 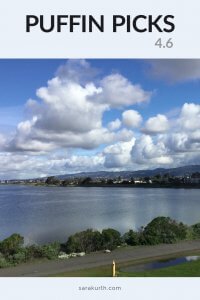 I love stories about arctic explorers at the turn of the last century. Rugged dudes in antiquated gear, fighting nature, always assuming they can beat nature because they are (usually) fine British gentlemen.

I’m sure there is some connection between this interest and my being an endurance athlete, but I’ll save that analysis for another day.

My favorite non-fiction book on the subject is Endurance, about Shackleton’s expedition – being frozen in the Antarctic for years before they were rescued. It turns out to be an even more amazing expedition than I knew.

My favorite fiction book in the genre is The Terror by Dan Simmons.

The Terror uses an actual expedition – Franklin’s expedition to find the Northwest Passage – as a starting point. The real expedition is believed to have been caught in the ice and was never heard from again.

The Terror fictionalizes that expedition, imagining what could have happened, with more than a dash of horror… maybe they weren’t alone on the ice.

I read the book years ago and was reminded of it because AMC just began a limited series based on the book.

Three episodes in, I’d recommend the series too.

At the finish line of my last marathon, the food for runners was pretty sad. There was some stuff left, but there were also many empty tables where food had been (chips and oranges by the looks of what I saw other runners eating). This is one of my biggest race pet peeves.

However, one of the race sponsors Ocho Chocolates, an organic confectionary based in Oakland. On race day, they had a little booth near the finish line and were giving sample size chocolates to runners and the public. Unlike the race food, they brought enough for the whole class – dark chocolate coated caramel, coconut, and peanut butter.

I found the chocolate peanut butter bars especially delicious. As much as I love that other brand of peanut butter cups, dare I say Ocho’s are better. They taste like they were made with honey roasted peanut butter. I don’t know what is actually in them, but the peanut butter is flecked with little crunches of sweetness.

I made sure to go out of my way to thank them for not running out of chocolate on race day!

I know I’ve mentioned Asana Rebel in my marathon training recaps, but I don’t remember if I’ve ever made it a pick.

As a runner, I have super tight muscles. About a year ago I began stretching daily, creating my own little routine to do every morning.

As much as I like the program I put together, I get bored doing the same thing every day. While looking for an alternative, I found Asana Rebel. Most of their workouts are behind a paywall, and I’ve never tried them.

What I have used regularly is their free daily workout, a rotation of 15 or so workouts, most around 5 minutes.

While 5 minutes may not seem like very long, it works for me because it is so short I have no excuse to NOT do it daily.

The Trend Of Free Race Photos

While I didn’t love many aspects of my recent Oakland Marathon, I must give credit where credit is due. There are two things Oakland did very well: the aid stations were plentiful and well-staffed by volunteers and it has free race photos.

When I started marathoning decades ago, the only option for photos were very expensive photos from on-course photographers. You actually got little postage-stamp size proofs in the mail.

I noticed it first with some of the smaller trail runs I do, where the photographers were another volunteer position.

But increasingly, larger road races are offering free photos. And recently, I’ve even managed to get some not terrible race photos.

This is one trend I can get behind!