I’m in the midst of my grumpiest week of the year.

Late September always brings a heat wave to the bay area. Not only is it miserable outside, but inside, my condo becomes an un-air conditioned greenhouse since the sun hits my unit this time of year just so. Urgh.

Add in that I’m tapering for my next ultra, which brings with it taper tantrums and angst and Sara is not a happy camper.

I recognize I’m a bit grumpier than usual, so I had to work extra hard to find things making me happy. But that’s why I like doing these posts – there’s always something making me happy, sometimes I just have to work a little harder to find out what it is. 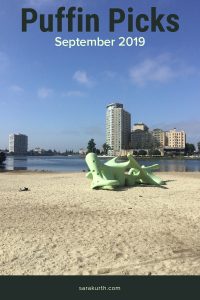 At a recent race (the trail-less trail run Mendota bottoms trail race- we were moved off the trail due to weather damage), Anderson’s Maple Syrup was there, giving away samples of Pure Fuel. And they were giving away copious amounts of product. Every time I walked by, they offered me some. I’d say ‘I 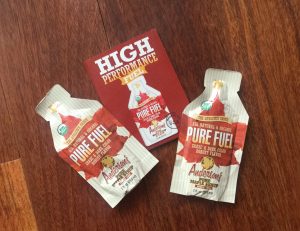 already grabbed one earlier’, they’d say, ‘So? Have more.’

OK, if you insist.

Pure Fuel are shots of pure maple syrup, designed to be used as fuel for athletes. It’s maple syrup packaged like GU.

I’ll confess, I’m yet to use these as a running fuel. Even with my super-sweet tooth, I have a hunch they’ll be too sweet for me. But Pure Fuel would be a great option for runners who don’t like or can’t stomach the thicker gel texture of GU since Pure Fuel is super runny.

Even though I haven’t used these packs for fuel, I’m loving having these single-servings of maple syrup around the house.

I don’t eat a ton of stuff that involves maple syrup, so it isn’t something I usually buy. I recently had a hankering for pancakes (one of my more random hankerings), but I knew it would be a waste to buy a bottle of syrup (or more likely for me ‘maple-flavored alternative’), since most of it would go uneaten for months (if not more).

But then it struck me- I have a stash of maple syrup packets!

Who needs to buy a bottle of syrup when I can just open a pack of maple syrup fuel!?

I cracked one open and had real maple syrup to top my pancakes.

Anderson Pure Fuel Maple Syrup shots – the Swiss army knife of running fuels. A running fuel when you need it, a breakfast condiment when you don’t.

You Are A Badass

I loved the self-help book You Are A Badass when I first read it a few years ago. It’s a book I’ve reread several times. I often read my favorite self-helpy kind of books. You never know when something will strike you in an entirely new way when you read it again under different circumstances.

There have been several follow up books to the original, and I recently finished You Are A Badass Everyday.

This book is a thin little tome with reminders, quotes, and anecdotes for when you need a little confidence pick-me up or pep-talk.

It is a great book to pick up, choose a page at random, and have a mantra or words of wisdom ready to go for the day.

There is an old joke: a clean house is the sure sign of an injured (or in my case a tapering) runner.

While home recently, I was struck by the overwhelming sense of just having too much stuff. While it isn’t the first time I had that thought, this was the rare occasion when the realization coincided with the urge to do something about it.

I went all Marie Kondo on the two worst spots in my house – the linen closet and the coat closet.

While I didn’t follow the true Marie Kondo method (that’s a little too hard core for me at the moment – I wanted a clutter clear out, not a full-on life overhaul), but I did pull everything out of my closets. Touched everything. Swept up the accumulated dust bunnies and organized the rest.

I ended up with a big Goodwill pile, a big eBay pile, a few extra trips to the trash and recycling bins and closets where I can actually see what I have (imagine that!).

Maybe sometime soon I’ll have the courage to face my organizational monster – my storage closet.

Eeek! That is the true Halloween terror.

Last weekend, I volunteered at a local trail race. There were 10k, half marathon, 35k, and 50k distances.

One of my tasks for the day was manning the awards tent, handing out overall and age group awards.

Many runners came up just to check their times.

I would ask if they’d won something. They usually would say some version of I doubt it, but I’d like to check my time (my iPad got results faster than the printed results were published).

When I checked their times, especially for runners of the 35k, many had won age group awards. Most were shocked and overjoyed.

I know the feeling.

I am a middle of the pack runner (especially on hilly trail runs). But when I do runs of odd distances (25, 30, or 35K), the age groups are pretty small. Even I can get an age group award during a race of an odd, non-traditional distance where there are often only 3 – or fewer- runners in each age group.

Not that I run races to win awards, but it’s always a fun surprise for us middle-of-the-packers.

Random race distances also make for an interesting training challenge (great for when I’m in a marathon training rut), and can almost guarantee a PR.

You’ll get a for sure PR in an 8k or 20k race if you’ve never run one before!