Another ultra training cycle is in the books!

After a summer filled with long back-to-back runs, earlier this month I finished ultra marathon #3 (marathon/ultra #34) – Skyline to the Sea 50k! Usually the times around a big race are pretty boring for me (by choice)-  I stick to the things I know and like.

This year, even on race day, I tried and liked a few new things. 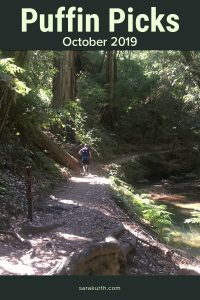 I make it no secret that I love GU. I’ve tried all of their flavors and I know which I like (and which I don’t). For Skyline, I even created a ‘flavor playlist’ since, like wine, some GUs pair better together than others (my favorite combo is toasted marshmallow followed by blackberry or another tart, fruity GU).

On the course, the race had many different brands and flavors of fuel from GU, Honey Stinger, and Clif Bar, so I tried a few new options.

Yes, the (very wise) rule is nothing new on race day, but I’ve used both Clif and Honey Stinger products before and I know my stomach is fine with them. I wasn’t going too far out on a limb.

The two standouts for me:

The biggest surprise I had on ultra day was that for the first time in forever, there was a legit race swag bag!

I’m used to getting a shirt and a medal. Bigger races may have a few little promo items. However, Skyline had a bunch of stuff, all in a race-branded tote bag.

The standout was an Orange Mud brand transition towel. A (super-soft) towel with hook-eye waistband so it will securely close for changing out of bottoms after a run (TBD how useful it will be for changing tops).

Then, a zipper on one end creates a hood that can be hooked over the car head-rest to protect your car seat from your sweaty-muddy clothes after a run 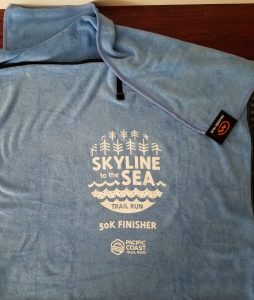 I hate driving home in dirty, sweaty, muddy clothes after a run.

If my drive home will be any longer than 15 minutes, I always bring a change of post-run clothes. As much as I love a good Clark Kent style back seat change, having a product designed for the purpose will be great.

I can’t wait for my next muddy/sweaty long run so I can try it out. Although I already know I’m going to have to fight the urge to not use it since it could be ‘too nice’ to get all muddy.

Not all of my favorites lately are running related.

Like so many of us, I’m becoming more aware of how much single use plastic I use on a daily basis and, where I can, cutting down.

I’ve brought reusable cups to coffee shops for years and live in a county that has banned plastic bags at grocery stores. Bringing my reusable tote bags to Target and Safeway is now second nature.

While doing my recent linen closet clean out, I found an old favorite I forgot I still had stashed away – a Lush solid shampoo bar.

An easy swap to get rid of plastic shampoo bottles.

I love the Godiva bar (which smells like jasmine), but there are other scents and formulas for different hair types.

The bars last forever and are perfect for travel carry-ons.

The newest (5th) season of the Netflix/BBC show Peaky Blinders was just released!

I know, it’s a stupid name for a TV show, but what are you gonna do?

As the series starts, it’s 1920s Birmingham, and a family gang is trying to move up in the crime world.

I was really excited when I saw the new season was out, but I also realized I’d totally forgotten where the story ended last season, so I decided to re-watch the entire show.

Season 5? Haven’t gotten there yet. I’m still in the midst of my re-watch (and savoring it).

All seasons of Peaky Blinders are on Netflix.

Fair warning: I’m as militant a non-smoker as you will ever find. It’s a disgusting habit. But after re-watching seasons 1 and 2, it’s kinda hard to not want to light up a cigarette after each episode since they make it look THE thing to do (The same thing happened after I watched the pilot of Mad Men).