I’m just a few weeks post-big race after running the Oregon Coast 50k last month. Post big event is always an odd time for me. There’s usually a little bit of a post-event funk. I’m out of my normal workout/running routine. Many years (this one included), I’m fighting a bit of a cold.

All that to say I’m a little out of sorts. 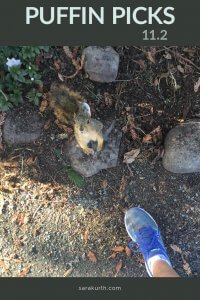 I’ve enjoyed the Lore podcast since it launched years ago. The podcast tells true stories from history, most of which veer to the creepy, odd, and disturbing.

So in other words, it’s right up my alley.

I was very excited when I found out they were turning Lore into a TV show. Especially since it was done in conjunction with Aaron Mahnke (author and voice of the podcast) and producers of shows like The Walking Dead.

Then I watched the first season and was a little disappointed. The show was… fine.

I already knew all the featured stories, either from the podcast or from my binge-watch sessions of Mysteries At The Museum (a guilty-pleasure TV favorite, which along with Forensic Files is my favorite go-to hotel room TV). Knowing the stories made the shock endings much less shocking and much less interesting.

I also missed the voice (literally and figuratively) of Mahnke, since the show is all re-enactments.

The second season was just released on Amazon Prime. I still miss Mahnke, and some of the stories were again already known to me, but overall, I liked the second season much more than the first.

Lore are on Amazon Prime.

Post big event, I’m not great about working out. I usually don’t run much in those first few weeks – I look forward to a mental and physical break before I jump back into my next running adventure.

But I do try to stay at least a little bit active. I’ve tried many workout apps and videos in the past few months. I keep wanting to like the audio-only workout apps, but they always fall short and I keep coming back to the Nike Training Club app for at-home workouts.

I know it’s my favorite because it’s the app I find myself comparing all the other options to.

Lots of great free workout options, in all different lengths and areas of focus. They’ve been adding a bunch of new and limited edition workouts lately to keep it interesting.

I love that they have an option for setting up 4 or 6 week workout programs, so I can have workouts set on the calendar, which makes me much more likely to do them, but I do wish they had more program options.

I like the ones they have, but I’ve done them all (at least all the options that are at-home friendly – there’s one that requires gym equipment). You can adjust the program to give you slightly different workouts, but they largely keep coming back to the same few options. I could use a little novelty.

A very small quibble with what is a great app with great workouts.

I’ve written several blog posts about why runners should volunteer for races.

While I love volunteering at races, it’s hard to do when I’m in training myself. I need my Saturday and Sunday mornings for training!

But, for the next few months, my Saturdays remain blissfully unclaimed by long runs, meaning… It’s volunteer season!

Heck, last week alone, I volunteered at two races, on the same day! A trail race in the morning, and a Halloween costume 5k in the evening. It was a fun (but exhausting) day filled with race registration, bib numbers, post-race food table snacking, and beer.

I have (at least) one race volunteer shift on the calendar for every weekend from Mid-October through Thanksgiving, where my tradition is to volunteer at a Turkey Trot.

Being in the Bay Area allows for some unusual (and unusually pretty) volunteer positions. This weekend, I’m vounteering at Brazen’s Summit Stomp – I’ll be positioned at the aid station at the summit of Mt. Diablo. In a few weeks, I’m volunteering at the North Face Endurance Challenge in Marin County, I’ll be a course marshal on the Golden Gate Bridge.

Pretty good places to spend a morning cheering on runners.

Plus good running karma for my future running endeavors! Plus snacks!

I know, two TV shows? It must be my off season!

I really liked the first few seasons of Dr. Who (the latest incarnation of the show that started in 2006), although I’ll confess I’ve fallen off in the last few years. I started losing interest once Matt Smith’s Doctor got all mopey. Peter Capaldi’s grumpy old man Doctor did nothing for me either.

But the thing with Dr. Who is the Doctor regenerates every few years when a new actor takes over the role. With a new Doctor comes a new energy and a new tone.

There was much ballyhoo when it was announced the latest Doctor was going to be a woman (Jodie Whittaker- known to me from Broadchurch). The new season just started so it’s too soon to get a full picture of the new Doctor and the tone the new show runner will bring, but a few episodes in, I can say I’m back on board. No more grumpy, dour Doctors.

Looking for a running connection? Join the Whovian Running Club! Brought to you by the same people who organize the Hogwarts Running Club.

Dr. Who is on BBC America. Earlier seasons are on Amazon.