Strategies For The Crowd Averse Runner

Marathons are getting bigger every year. The largest marathons like Chicago and New York are both now nearing 50,000 participants.

It’s great that running and marathons are gaining in popularity, and I know many runners thrive and are invigorated by running in a large mass of humanity.

I, however, am not one of them. And I know I’m not the only one who is not a fan of running in a crowd.

Feeling constrained in a race stresses some runners out. Getting stuck in a crowd can prevent some from following their race plan or forces a faster or slower pace than intended.

Personally, I tend towards people claustrophobia. I have no problem with small spaces, but if you give me the same square footage (or square inches) in a crowd of people, I will freak out every time. When I imagine doing a race with 50,000+ people, I can only imagine getting elbowed and dodging runners for hours on end.

But there ways to cope. There are two general approaches to take: avoid the crowds altogether or manage them.

There are still plenty of races of all distances that are small and have manageable crowds.

The added bonus is that these smaller races are often cheaper.

Check with local running clubs or running stores. They are usually in the loop of upcoming smaller community or neighborhood races.

But also know that even in small trail races, crowds can be an issue in the first mile. The trails are often narrow and even a dozen runners will cause a bit of roadblock, but in nearly every trail race I’ve done, the crowd thins out quickly.

Sometimes it thins out too much- during many trail runs, even when I was frustrated by the crowds in the first quarter-mile, I’ve found myself a bit freaked out being in the middle of nowhere when I haven’t seen someone in a while.

Did I get lost? Did I take a wrong turn somewhere?

Many great races come with crowds, so even if you hate them, you’ll likely find yourself dealing with them at some point.

Be Prompt (Or Early)

Getting to the start area early will make your crowd management so much easier. You’ll be able to park while there are still spots, get your gear checked, and visit the porta-potty while the lines are still manageable.

While the later arrivers are stressed out about parking and bathroom lines, you can just sit and meditate, do some visualization or whatever else your pre-race ritual is. 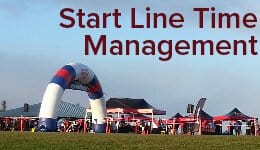 As the start approaches, manage the crowd by lining up appropriately.

If you start too far back, you will have to pass people and jockey for position. It’s no fun re-enacting NASCAR when you should be focusing on settling into your pace.

If you start too far forward, you will be the problem and faster runners will have to pass you.

Don’t be the problem.

How you do this varies by race. Most have some combination of assigned corrals, signage or pacers indicating the pace time or finish time.

Also look at the people around you, do they look like they are the same general level of fitness as you? This is far from an exact science, but if I look around and see a bunch of dudes that are 3% body fat, I know I’m too far to the front and I need to move back.

You may not know exactly where you fit. Take a best guess based on your training times and race goals and line up accordingly. 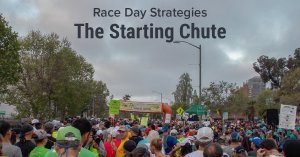 Most people in the US are used to keeping to the right on sidewalks and on the road. Beat the crowds by running on the far left-hand side of the course.

While, of course, staying in-bounds of the course. Respect course marshalls, course signs, and traffic cones.

Once the race starts, runners tend to find their rhythm and after a mile or two, the worst of the crowds and passing has passed.

Until, that is, the aid station.

At that point, a little chaos may again reign. There are several options to deal with aid station crowds.

BYOH. If you carry your own hydration and fuel, then you can skip the aid station altogether or only stop if the crowds are minimal. (Read More: Should You Carry Your Own Hydration On Race Day?)

Scout it out. Scout out the aid-station layout as you approach. What do you need? Can you tell where water/sports drink is? Where are the crowds?

Keep left. Once again, keep left. If aid is set up with tables on both the left and right-hand sides of the course, move left. Those tables will almost always have fewer people.

Don’t be first. Unless there is only one aid table with the option you need, don’t stop at the first table. It is always the most crowded. Keep moving to a later table and refuel there. 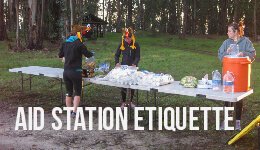 Don’t let your aversion to crowds stop you from signing up for a race.

Choose your race carefully and do a little planning ahead of time. Then go forth and enjoy your race experience to the fullest!