I recently came across a post on the Map My Run Blog called Should You Rely on Course-Provided Nutrition During a Race?

I immediately thought – Wow, I could make that the shortest blog post possible. Here’s my version of that post:

Should You Rely on Course-Provided Nutrition During a Race?

Ok, that’s oversimplified, but not by much. 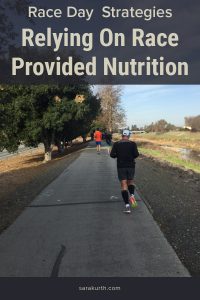 Should you take that fuel?

Should you entirely rely on that race-provided fuel?

It’s Cheaper: Fuel is expensive. Races are expensive. If you can save $1-2 per fuel pack by using the stuff the race provides, that adds up and saves a fair bit of money over the course of a race.

It’s Lighter: Fuel can be annoying to carry. Some runners really don’t like carrying anything extra on race day (I’m showing my bias, but I wouldn’t consider fuel an ‘extra’ as much as a necessity, but I won’t get into the semantics here).

You May Not Be Familiar With It: What fuel works for you is individual to you. Just because the race provides it doesn’t mean it’s the best or most effective fuel for you. If you haven’t tested a fuel before race day, NEVER take it for the first time on the course.

It May Not Be At The Right Locations To Fit Into Your Race Plan: Most races only provide fuel at particular aid stations. This may or may not fit into your fueling plan. They may not provide fuel frequently enough for your needs.

They May Run Out/You May Not See It On The Course: Sadly, races run out of stuff. Just because they say they’ll have fuel at mile 8, doesn’t mean they will. Or that you’ll see it.

I’ve done races where they said they’d have fuel at every other aid station, but where I never saw fuel once. Maybe it was poor observation on my part, or misplaced volunteers, or poor supply chain management forgetting to drop off fuel at aid stations, but whatever the cause, I never once had the chance to take race-provided fuel.

Distance of Your Race

Are you running a 5k or a marathon? Your fueling needs for races of different lengths vary significantly.

If you are running a shorter race, it’s OK if you leave a little more up to chance.

The longer you run, the more important fueling and refueling on the run becomes.

If you are running longer than about 90 minutes, you will have to re-fuel on the run, and that should NOT be left up to chance.

Your body can only store enough fuel for around 90 minutes of activity. If you’ll be running longer than that, you need to refuel.

If you are considering relying entirely on race-provided nutrition, review the locations of the aid stations well before race day.

Most marathons I’ve done have aid stations every 2 miles (give or take), but fuel is usually only provided at a few of them.

What Fuel Will the Race Provide?

The rule is: nothing new on race day.

Race day is the wrong time to learn that the hot new fuel the race provides does NOT agree with your stomach.

If you plan on using the race provided fuel:

So… That’s All Great Info, But What Should I Do?

What fueling works and what doesn’t work for you is individual to you.

There are general guidelines, but ultimately, you need to try stuff out and see what works for you.

During training, try different fuels. Buy some of the fuel the race will provide and test it out during training.

Test out a few different types of fuel, how much you consume, and how often.

Mix and match the variables.

If something doesn’t work for you, don’t assume fueling isn’t for you and give up. Try a different fuel, or in different quantities, or consumed less or more often. 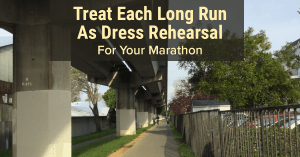 Based on your training, decide on your race day fueling plan. 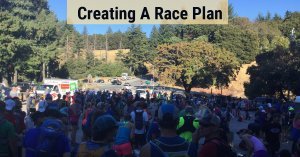 Compare Your Plan to the Aid Stations

After you’ve tested the fuel, and once your race and fueling plans are in place, then (and only then), compare that to the race.

If everything matches up, relying on race provided fuel may work for you.

If everything doesn’t match up, carry your own fuel.

It’s Not All Or Nothing

Like so many things in life, there are other options that fall somewhere in the middle of yes and no.

I, for example, don’t think of it as entirely ‘bring my own’ or ‘entirely rely on the race’.

I bring my own fuel, and use the fuel provided on the course to supplement my needs, assuming it’s one of the standard fuel brands, since I know (from years of trial and error) they work for me.

If it’s some new alternative chickpea and chia fuel, that’ll be a hard pass for me on race day, though I may grab one to try later when the stakes aren’t as high. 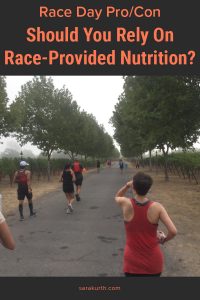