This past weekend I did the Berry Creek Falls 25K at Big Basin State Park. It is a beautiful trail that goes by many of the parks famous waterfalls. With over 3000’ elevation gain, it’s also one of the more challenging runs around. Here is my recap:

Goal #1 (Not directly related to performance, but given my run-in with rabid poison oak at my last trail run): Do not get devoured by poison oak

Goal #2 (actually related to my performance): Feel not terrible at the end of the run. I know this does not pass the ‘SMART’ method of goal setting, given that it isn’t remotely specific or measurable, but since I’m not a time-focused runner my race goals are always a little fuzzy. Besides, my runs of late have been pretty meh- so my expectations are low.

The course! I’ve been on many of these trails before as part of the Skyline to the Sea Marathon in the fall, but this course allows for a better view of the falls.

Big Basin State Park doesn’t look terribly far away on the map, but there are lots of twisty side roads to get there, so it’s just under a 2-hour drive. So wake up at 4:30 am!? ugh.

The travel bonus is that there is zero traffic at that time of day, so the drive was really easy- and much faster than Google maps predicted. I got to the park with almost an hour to spare.

That’s early, even by my always-early standards.

Perfect! It was chilly at the start (about 45 degrees), but as the day went on it got to be in the upper 70s with a light breeze all day. Since this course is in the redwoods, it is shaded the whole way, so sunburn wasn’t going to be an issue. Did I say perfect?

This was the first outing of my trail running skirt this season. Given the 40 degree start, I also brought along my arm warmers, which served double duty as protection against poison oak. I was never concerned about poison oak on my arms before my last race at Armstrong Redwoods, this time round I was overly cautious.

No porta potties, but instead we had the state park restrooms at the start. Yeah! except that until nearly race time, only 2 of the 7 stalls were unlocked. Didn’t seem like the best planning, but they got there eventually. Since I was so early, waiting in line wasn’t an issue.

There were three events going on simultaneously: a 10k, 15k, and a 25k. All three races started at the same time. The 15k and the 25k ran the same route and turned immediately onto a single track trail. Translation: 100+ people were immediately forced into single file. It was nearly 1/2 mile before we spread out enough that I could settle into my own pace. Staggering the starts just a little would have made a large difference.

Favorite part of the race

The waterfalls! Midway through the 15k loop, we passed (and climb up to the top of) a series of 4 or 5 waterfalls- which are amazing. I’d been this way before, but given the California drought of the last few years, this is the first time I’ve seen them with any substantial amount of water.

Least favorite part of the race

It’s a tie:
#1 Between the bathroom lines and people arriving late, many people started after the official start. For the first 3-4 miles, I felt like I was running the Dipsea given the number of people passing me.

[Aside: The Dipsea is an iconic, but odd, little race up in the Marin Headlands that starts backwards: the slowest groups start first and the fastest groups start last, so there is the chance that anyone can cross the finish line first. This results in a massive amount of passing on the course. I now know what that feels like.]

#2 The food at the finish line was pretty much non-existent by the time I finished. I think they had stuff, but I was near the end of the finishers so by then, they were out of pretty much everything.

C’mon- I just ran over 4 hours- I need something a little more substantial than potato chips and stale Oreos. I’m not terribly picky, but something… I’m glad I always have food in the car because the park is a distance away from any restaurants for re-fueling.

Dare I say nothing? As hilly as this course is, I did more power walking than running, which does tend to cut down on the chafing

My post-run reward to myself

A stop by the Muji store in San Jose on the way home. I am a stationary addict and very particular about my pens. Muji has great pens and notebooks for cheap. Totally unnecessary, but a good (and calorie free) reward for a job well done.

What hurt most the next day

Quads. Very much my quads. Did I mention my quads are still sore?

The course is beautiful, the weather was perfect and I felt pretty good (once I found my rhythm after the initial traffic jam 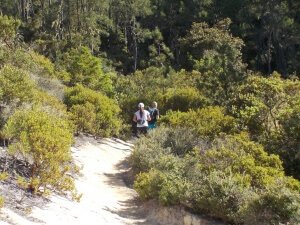 ) until about two miles to go when the course has one last big uphill. That took all of the oomph right out of me.

But, every uphill has a downhill and the last 1/2 (all downhill) refueled my batteries for a strong finish, so on that front I am happy with a finish time of 4:11:04 (46 of 53 finishers).

Two days out and I don’t have any traces of poison oak (there was some on the course, but it wasn’t terrible). I’ll have to wait a few more days to claim victory there, but I’m hopeful.

Would I do this race again?

I would for sure do races on these trails again (there are a few each year in the area) the course is BEAUTIFUL! But I’m not sure that I would do this exact race- not having any food left for slow finishers is just not cool. I paid the same entry fee as the fastest runners, there should be something left.

I don’t know! the next for-sure thing is pacing the Santa Rosa half marathon, but that is not until the end of August. I’m sure I’ll do other races before then, but I’m playing it by ear this summer and will likely do more last minute registrations.