On Sunday, August 28th, I was a pacer for the Santa Rosa Half Marathon in Santa Rosa, California. Santa Rosa is in the heart of the Sonoma Wine Country, and the race runs by a few vineyards to prove it. The full marathon actually runs through a winery.

As a pacer, I have only one goal: hit my time. For this race that means a 2:20 finish time.

From my house, Santa Rosa is about an hour’s drive. It is that perfectly awkward distance that is too close to feel justified in getting a hotel, but too far to want to drive on race day morning.

In the end, I stayed at home and set my alarm for 4:15 am (yikes). I had to be on the road by 5 so I could be in Santa Rosa by the 6:15 pacer call time. Of course I planned a little time cushion for traffic and parking, I’m always a little (ok, a lot) paranoid about race parking.

The one upside of driving at 5 am? No traffic!

My drive took me on 101 North, which is always terrible. I now know the one exception to ‘always’: 5 am on a Sunday morning.

It only took an hour to drive. For comparison, the trip home (around noon, just as the weekend wine country travelers started heading back to San Francisco) took just over 2 hours.

PERFECT!! 55 and overcast at the start. The clouds started breaking up and the sun came out just as I was finishing. Just the slightest of breezes.

If I could order up perfect race day weather, this would be it. 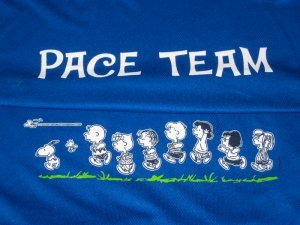 The pacer shirts had the Peanuts characters on them! So cute! A shirt I’ll actually wear again.

It was a nice change of pace to have a pacer shirt that isn’t in the color I call electric lemon lime. While that is a perfectly nice color (and visible for pacers, which I get), it seems to be the color de jour lately. Way too much electric lemon lime in my workout shirt drawer.

My Favorite Part of the Race 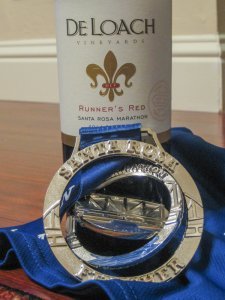 The runner shirt and goodie bag. I’m always happy when I get a shirt I’ll actually wear again. This year, the Peanuts characters finally make an appearance on the shirt (Charles Schultz lived in Santa Rosa for years). And wine, did I mention the wine? Runners get a bottle of wine. We are in Sonoma County after all.

I also love that the Expo is at the DeLoach winery. While parking can be tough at the winery, an afternoon among the vines sure beats going to a stuffy hotel ballroom.

And of course I always love meeting and talking to my paceees. This year it was an interesting group: equal parts locals and out of towners; first time half marathoners and race veterans. I even had my first returning pacees. Sisters who were with me when I paced the same group last year. I love it!

Least Favorite Part of the Race

Most of the course is on a paved trail next to the Santa Rosa Creek. The trail is not terribly wide, which isn’t a problem until near the end. The full and half marathoners run the last 4 or so miles together. So just as the fastest marathons are pushing hard to get a Boston qualifier time, they meet the slower half marathoners (read: me).

The combination means that my runners and I are constantly being yelled at to move over, even when we are as far to the right as we can be.

The race has a beer fest after the run, which looks like fun, but I can’t quite do the drinking at 11 am thing. And after the 4 am wake-up call, I really just wanted to go home and nap.

I know that is never a good idea: Long run + nap = crazy sore, but sometimes it’s necessary. As expected, post nap I was in desperate need of some serious stretching.

A stop my Sift cupcakes in Cotati for a Samoa cupcake. While I have been eating much better lately, I do still love my cupcakes. And Sift is likely the top of my favorite cupcake list.

I once paced a race in Napa just because it was near a Sift storefront. Run half marathon, eat a cupcake. Sums me up in a sentence.

I think 4 seconds is well within the margin of error for pacers.

Would I Do The Santa Rosa Half Again?

Yup. You can likely look for me again next year as a pacer. Great course and perfect running weather every year I’ve done it.

And did I mention you get wine in the goodie bag?

Skyline to the Sea trail marathon in October. 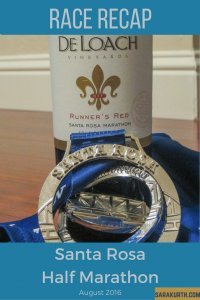 One thought on “Race Recap: Santa Rosa Half Marathon”