Marathon #25 is in the books! A trail marathon, one of my favorites: my third running of the Skyline to the Sea Marathon.

Skyline to the Sea is a trail that is usually done as a two-day hike. It starts near Saratoga, California (near San Jose) and runs to the Pacific Ocean just north of Santa Cruz.

It a tough course. Overall, it loses elevation but still climbs around 2500 feet. It is also a stunningly beautiful course filled with redwoods, rocks, and streams. It is Northern California at its best.

Pre-Race Goal for Skyline to the Sea

Just as I was considering my goals (a day before the run) I got the final pre-race email from the race director. The weather forecast is for ‘unprecedentedly hot’. With that in mind, I am ready to throw time goals out the window if I need to go into ‘get through this alive’ mode.

Wake Up and Travel To

For me, one of the hardest parts of Skyline to the Sea is just getting to the start line. It is a point-to-point course. Runners park at the finish and get bussed to the start.

From my house, it is about an hour and a half drive to the parking area and the bus ride is just over an hour from there. By the time I hit the starting line, I’ve been traveling for nearly 3 hours.

There are a few hotel options, but most are right on the coast and are therefore REALLY expensive on a Friday night. If I’m gonna spend that much on a hotel, I’m not going to check out at 6:30 am. I’d rather spend the extra time driving and go to one of those hotels when I can lounge around and get breakfast in bed.

My wake up call was 4 am (ugh), but the upside of being on the road at that hour is the total lack of traffic. I even managed a little bit of a nap on the bus before we arrived. Then to porta-potty (is ‘porta-potty’ a verb?) and at long last, check-in.

Favorite Part of the Race

I won’t even try to describe it:

Trail running, almost by definition, is a dusty affair. I know this and expect this. Coming home covered in dirt is half the fun.

However, with the ongoing California drought, this course seemed especially dusty. The dust was aggravated by the fact I kept getting stuck behind clumps of runners so there was no time for the dust to settle.

I think I inhaled nearly a pound of dust. 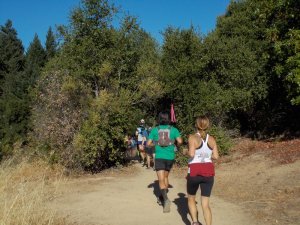 2) I think this was the most diverse endurance race I have ever done. Every possible age, race, gender, ethnicity and physical type were represented in the field. I’ve found trail races to generally be more diverse, but this race seemed especially so for some reason. It’s great to see.

The first weeks of October are traditionally a time for a Bay Area heat wave. This year is no different.

As predicted, it was hot. Hotter than previous years for sure. But since most of the course is shaded by redwoods, it wasn’t too terrible. There were a few exposed areas near the end that got a bit stifling, but I was ready for it.

Least Favorite Part of the Race

For the second time in my running career, I did fall/faceplant combo. Two scrapped knees and a bloody nose that was easily stanched, but I am totally fine.

No one will notice the blood stains, right?

You know you are a trail runner when you are proud of the fact you come home with a blood stained bib number. I’m not sure I’ll be able to get the blood stains out of my running skirt though. Good thing they kind of blend into the pattern. Maybe no one will notice. 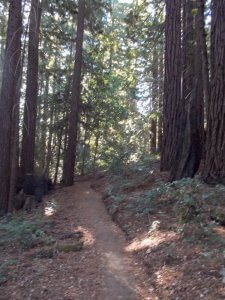 Shockingly, nothing. I don’t think I’ve ever had that a marathon before. I wish I could say I did something differently that I could repeat in the future, but I think it was just one of those things.

There was some poison oak on the course, so I did my anti-poison oak post-run ritual. I’m two days out with no sign of itching, so fingers crossed I escaped unpoisoned.

I’ll have to wait another week or so before I can claim victory.

Would I do the Skyline to the Sea Marathon Again?

Hells to the Yeah!

I’m getting stronger and faster every year I do this race. It is tough, but beautiful and so worth it. Hopefully, no heat wave next time.

My Biggest Take Away?

I’m not sure how to learn this, but I’ll figure it out.

Training for my next full marathon (Oakland Marathon) starts at the beginning of December.

To stay active between now and then, I’ll likely do the Peacock Gap half marathon or 30K at the end of November. 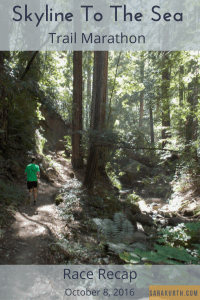