The only time you should look back is to see how far you’ve come.
-author unknown

Today is the one year anniversary of my purchasing my first web domain. I had no idea what I was doing or what I was going to do with the site. It was an experiment. I’d always read about people ‘having a website’ and ‘buying a domain.’ I wasn’t really sure what that meant.

The first few iterations of my website were little more than a digital business card. An extension of my LinkedIn profile.

I didn’t start blogging right away. I’d had a vague notion about blogging for years and had half-assedly started blogs on various platforms, but I had too many ideas about what I could do. I wasn’t ready to commit.

Reflections On My Website’s One Year Anniversary

I’ve continually surprised myself with what I’ve done on the site. And seeing where I am now, looking back at where I started is kind of amazing.

After a year, I’ve learned a few lessons I won’t have predicted.

I Need to Start Before I Am Ready

It is so tempting to stay in preparation mode forever. That time just before something launches is the best. Everything is possible. I’m capable of anything. I haven’t had to actually put my butt in my seat and do the work.

I’m a planner, a learner, a researcher, and an organizer. I could take classes and watch online tutorials forever. There is always one more book to read, one more class to take, one more video to watch.

But eventually, I realized I’ll never be completely ready. The research and planning will never be done.

And if I never do the thing I am studying how to do, well, that’s not doing anyone any good.

I watched half a dozen videos on how to set up a WordPress site before I actually start setting one up. (shout out to lynda.com – I’ve gotten my money’s worth out of that membership). I was maybe 5 minutes into doing the actual work before I had to go back and re-watch a how-to video.

One Thing Leads to Another

Before I started the blog, I was concerned about having enough stuff to write about. I delayed starting for months out of fear of what would happen 3 months after I started. What if I ran out of things to write about?

That, of course, is ridiculous. Did you notice how many ‘ifs’ and ‘could bes’ are in that thought?

So I just started. I quickly found that one idea leads to another, which leads to another. And if I do run out of ideas? Well, I’ll worry about that if and when it happens (it sure didn’t happen in the 3-month timeframe I’d originally feared).

Similarly, learning one new piece of software leads to learning something else, usually something I didn’t even know existed a few months ago.

Lesson: Just Start. One thing will lead to another in ways I could have never imagined.

The first draft of everything I do is terrible. I’d like to think the final results are not too bad.

The magic happens in between. The writer’s adage says that you can’t edit what you didn’t write. I think that’s true not only in writing but in every endeavor.

I procrastinated for a long time before actually creating my first web page. What should I include? What is the perfect color scheme? Do I want full-size photos or medium size photos?

I eventually said to hell with it and threw a bunch of stuff up on the page. It looked awful, but it was something to work with which made revisions possible. A few iterations later, it wasn’t too bad.

For me, the same goes with writing posts. Nearly every first draft has no point and no structure. A few revisions later and it comes together into something that (hopefully) is interesting and fun to read.

Lesson: My first draft will be terrible, so:

There Are Few Things That Can’t Be Changed Later

When I first considered blogging, I was afraid of making a mistake. Of posting something that wasn’t perfect.

Then I accepted that it’s never going to be perfect. I need to just get on with it. Even when something is ‘done,’ it can almost always be changed.

My known weakness is self-editing (or more specifically, self-proofreading). I can write, and I can proofread, but I can’t do both. After doing a recent review and proofread of my entire site, I was appalled by some of the errors and typos I came across.

So what if I publish a post with a typo? It has happened before, and it will happen again. I have lived to tell the tale every time.

It hurts my little Ravenclaw heart, but I’m only human.

If I later find a typo (or heaven forbid one is pointed out to me), I’ll change it. If I hate the color scheme for a graphic, I’ll redo it.

Lesson: This isn’t brain surgery, I’m not taking irrevocable actions. The worst thing that will happen is that I will be a little embarrassed. I’ll get over it.

[I could say I’ve intentionally left a few typos in this post as meta-commentary on making mistakes, but more likely it was just a proofreading oversight.] 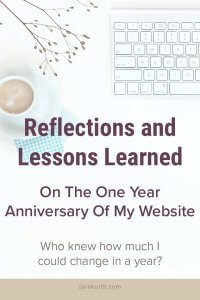