I’m not sure why I thought running Rocky Ridge was a good idea. It and Drag-n-Fly (which I did two weeks ago) are the two hardest half marathons around. I’m all for a challenge, but two impossibly hard half marathons sandwiching the solo marathon-as-long-run that I did last week?

I’m starting to think I’m not OK in the head.

But, I still have free race entries burning a hole in my pocket from my Spring race volunteering binge (seriously, it’s the best deal ever), so why not? It won’t be the first race where I walk more than run.

Heck, it won’t even be the first race where I walk more than I run this month. 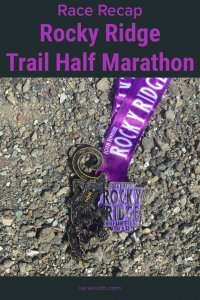 It’s almost a cheat to say set a new course record. The only other time I did Rocky Ridge was in 2012 (in a time of 3:53). I can’t imagine a scenario where I wouldn’t beat that time given my training, but never say never.

Similar to Drag-n-Fly, I guess my real goal is to have a strong power walk. I know I’ll be walking a lot given the 4000 feet of climbing, so it’s key to keep moving, even when it’s steep.

Once again, perfect running weather. 60s at the start, upper 70s at the end. Enough wispy clouds to keep the sunburn at bay.

This racing season has been the best string of weather I’ve ever had for running. One race after the other has not only NOT been bad, it’s been downright perfect.

I would expect NorCal summers to not be cold or rainy (winter is our rainy season), but we are prone to heat waves in September, so for us to have 3 weekends in a row of nice, temperate weather? Unheard of.

The same holds true for every run I’ve done since July. All I’ve done in these race reports is say the weather has been perfect. 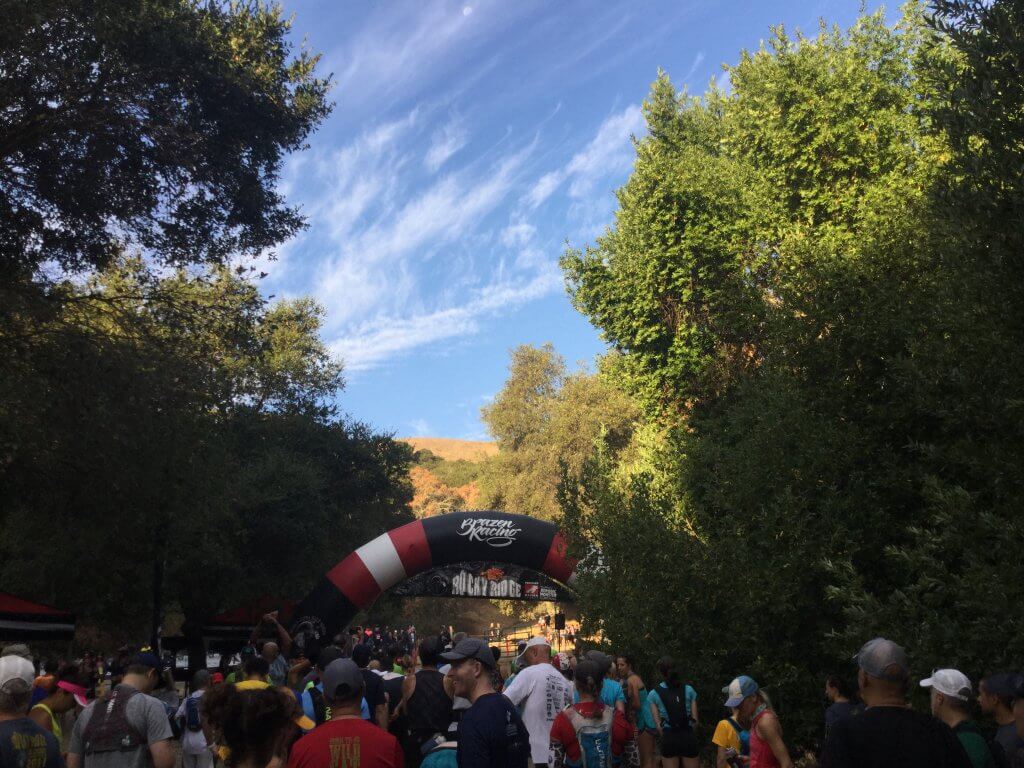 That description makes it sound so simple.

There is some single track, some fire road. The last major uphill is a paved trail.

You name it, this course has it.

And hills. Lots of hills.

The official measurements of this course have it at 13.7 miles and climbing 3900 feet. My Garmin varied from this, but in either case, it’s a lot of ups.

But the upside of lots of uphills is it means pretty views from various peaks and ridges.

Following the pattern of many of my runs this summer, I felt equally strong throughout this entire race. I power walked the uphills and ran on the flats (although there aren’t many flats) and the downs, all the way through.

I felt equally strong at mile 1 and mile 12. It was the exact same way I felt at Drag-n-Fly and I love it.

I could maybe read that to mean I could have pushed harder at the start (that I had too much left in the tank), but given my ultra training, I much prefer an even effort with the stamina and endurance to go long.

I’m an ultra runner, what can I say?

Yeah… So That Happened…

In my professional life, I’ve been a risk manager. I was paid to think about all the things that could go wrong and prepare and prevent the problems that I can. This is a thought process I can’t (and don’t really want to) shake, and it comes in handy when planning for trail runs where things can go wrong and where there are real potential risks.

I often run with a little pack of kleenex and a small first aid kit in my pack. Some runners might scoff at the extra weight. I was recently at a trail conference and one speaker in particular raised the point (several times) that when he goes out on the trail, he doesn’t like to carry anything- it ‘weighs him down.’ I’m not sure why he was chosen to talk on a panel about gear and trail safety, but I digress. 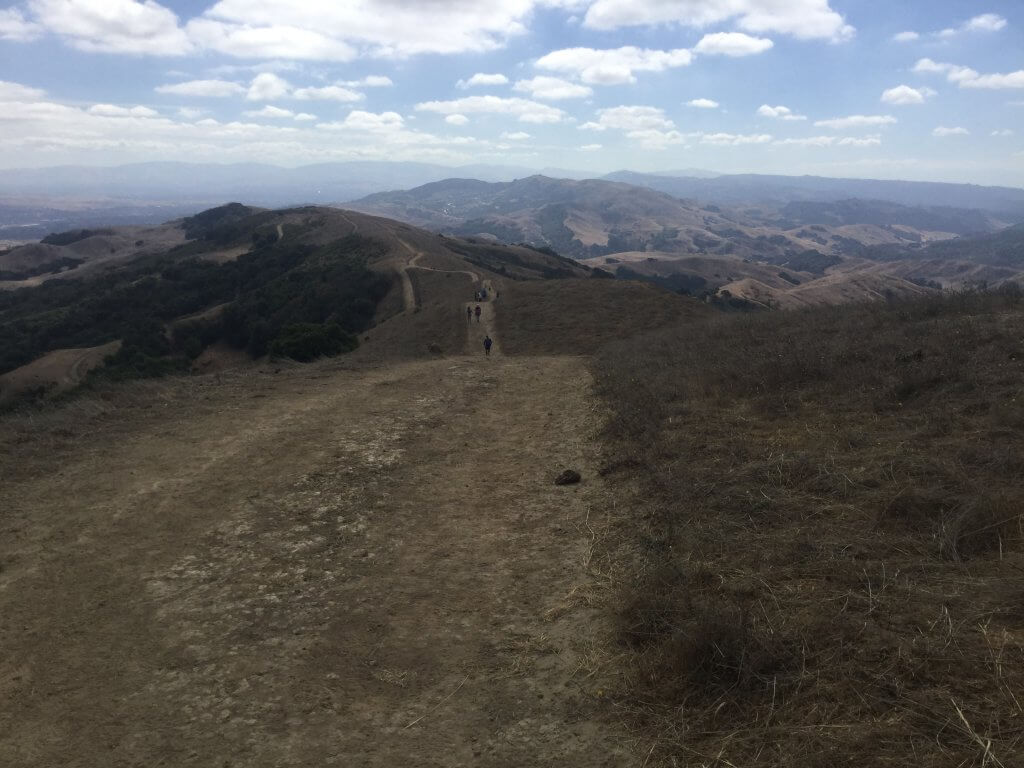 At Rocky Ridge, I came across not one, but two runners who had recently fallen and were bleeding. Kleenex and band-aids to the rescue!

Both runners were fine and started walking not long after I (and other runners) got to them. They were a little bloody and ego-bruised, but otherwise fine (for the record, several of us passed these injured runners and stopped to help, many of us also reported the bib numbers at the next aid station to make sure they were accounted for).

You may not need kleenex or first aid stuff very often, but carrying 2 ounces of stuff on every run is worth it for the rare case you need it.

The unexpected side effect of stopping to help was the impact that it had on my time.

I have my Garmin set to auto-stop whenever I stop for more than a few seconds. This means I’ll have two times for my run – the ‘total time’, and the ‘moving time.’ The difference between these two times is generally negligible. Usually, less than a minute (if that), since it only auto-stops at spots like stop-lights or potty breaks.

Today, my official chip time was 3:43. My watch time (the ‘moving time’) was 3:16. That half(ish) hour difference was the time my Garmin had auto-paused while I was helping the runners who had fallen.

I consider my finish time to be 3:16, even if the official race records will differ. I’m sure I could submit a request to adjust my finish time considering the circumstances, but I don’t really care about it enough to do so.

When you are over 3 hours for a half marathon, it doesn’t make sense to quibble about a few minutes.

One of the aid stations had OtterPops! These are the most amazing thing ever on super hot runs, but even for more temperate runs like today, they still taste soooo good.

Brazen Racing has volunteer photographers on the course taking photos that will be available for free. This is a great perk, and I generally like it.

However, for Rocky Ridge, one of the photographers was posted near the top of the third, and final, major uphill, leading to photographic gems, such as:

But another photographer got a much better photo: 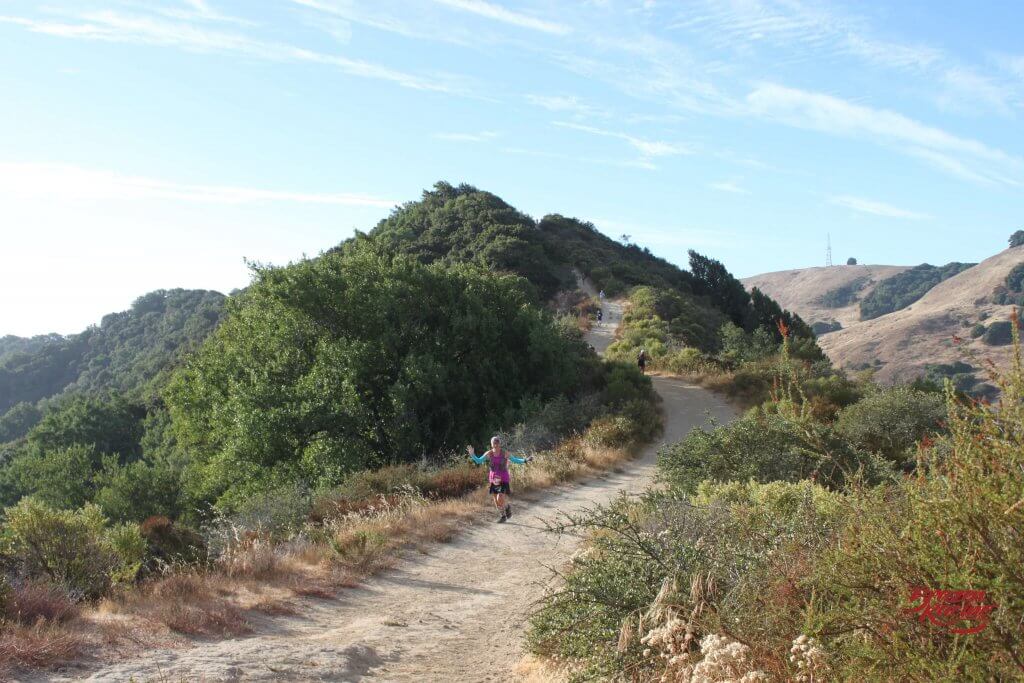 When Will I Learn?

For races, I usually get home, shower, eat something that resembles healthy, and at some point in the afternoon, do some foam rolling.

Today, I had a little video shoot with my running club to promote our upcoming marathon training program. That threw off my cool-down and foam rolling timing. In fact, I didn’t foam roll at all.

And boy did I feel it on Sunday when I woke up.

Note to self: foam roll after these crazy races! Even if it’s just a little bit before bed.

I did. By either time measure, I set a new course record. Either by 10 minutes or by 30 minutes.

I also kept up the power-walking for the entire course, and I feel like my energy level was consistent throughout the whole race.

I know I’m insane for saying it, but yes, I would.

This isn’t the kind of race I’d want to do every year, but I can see challenging myself to it every few years.

Only one race is left on the calendar. The biggie: Oregon Coast 50k! 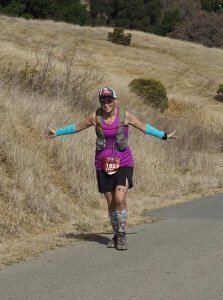 Top: Road Runner Sports Tank
Bra: Title Nine Frog Bra
Skirt: REI
Socks: Injinji Mini-Crew
Shoes: Asics Trail Sensor
Hydration: UltrAspire Alpha
Hat: Tracker Hat from the Trail Running Conference
Calf Sleeves: Zensah Pop Art (worn more for poison oak protection than compression benefits)
Arm Sleeves: Asics Speed Chill. While I didn’t need these for warmth or even sun protection, the final ridge in previous years has been very foggy, windy and cold, so I thought I may need them in that stretch. It was cold and windy on the ridge and I’m glad I had them. They double as sweat rags at other times.
Temporary Tatoo: Race supplied. It is a wildcat in flames, the Rocky Ridge mascot.
Nutrition: Salted Watermelon Gu gel and Payday bars from aid stations. I don’t know why I got on such a Payday kick.