As race day neared, a few asked about wearing their hydration packs on race day.

I was surprised how much of a debate this generated.

I’ll be upfront about my bias: I pretty much always wear my hydration pack on race day, and always wear it for marathons. It would feel odd to run a marathon without it.

Note: this post is from the point of view of road races, especially half marathon or longer distances.

If you are doing a trail race: wear the pack.

Most of the trail runs I’ve done either highly recommend or flat-out require that runners carry a certain amount of water. There are usually fewer aid stations and a greater need for self-reliance.

Carrying your own hydration on the trail is a good idea, even if it isn’t required.

Races use a shocking amount of paper cups.

I volunteer (and run) at a lot of races, and I’m continually stunned by how many paper cups are used in the course of a race.

At one recent race I volunteered at, we had nearly a thousand cups. And that was at one aid station (of eight) at one race, in one city, in one state. Multiply that times the number of races that happen every weekend.

Even if those cups are properly composted or recycled (which is sadly all too rare), that is a lot of cups.

Some runners take 5 or 6 cups. 1 to pour over their head, 2 to drink water, 1 to drink sports drink, and then grab another water to go.

A pack means you can take zero cups!

You’ve created a race plan, right? You know how often you want to (or need) to drink?

If your race plan has you drinking every 30 minutes, but the race aid stations are every 45 minutes (or more), that could throw your plan off.

If you have your own pack, you can drink when your race plan says you should drink.

And I, for one, am a runner who hates to be thirsty on the run. If I’m thirsty, I want a drink, NOW. Not in 2 miles where an aid station is set up. NOW!

But maybe that’s just me.

Races Can Run Out Of Stuff

Luckily, this isn’t too common, but it does happen – races and aid stations will occasionally run out of cups, water, and/or sports drink.

And while it doesn’t happen very often, when it does, it’s likely to be the days when you need hydration the most (read: really hot days).

While front of the pack runners on temperate days will likely never have to worry about this (and if they do, the race needs to improve their logistics and support), if you are a slower runner, or the weather forecast is for crazy hot, know there is a chance an aid station may not have something you need. 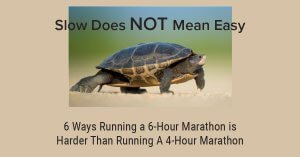 Even if the aid stations are well stocked, and even if they are placed exactly where you want them, it may be best to avoid them.

Depending on how they are laid out and staffed, they can be crowded or slow you down.

Carrying a pack means never having to enter the aid station fray. 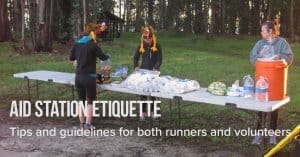 It Can Slow You Down

In our group discussion, every reason for not wearing a hydration pack on race day came down to some version of ‘it will weigh you down’ or ‘you’ll be faster without it.’

I’m not sure how much wearing a few extra ounces will actually slow you down. Personally, I’m not the kind of runner who obsesses about every ounce, but I’ve heard enough other runners mention this that I’ll assume it’s a legit issue and I’ll include it.

If you are looking to PR, weight could be an issue, so ditch the pack.

I know it’s my bias showing, but I really could only come up with this one con.

Neither Pro Nor Con, But Things To Consider

Not every consideration is neatly a ‘pro’ or a ‘con’. Here are a few things to consider that could go either way depending on your situation.

If you’ve worn your pack throughout training, and you’ve taken it on 20+ mile training runs without issue, it isn’t likely to create an issue on race day.

But if you’ve had issues with your pack, or you haven’t tested it on the longest of long runs, race day is not the right time to learn your pack chafes something fierce after 10 miles

Pull out the course map and review the location of aid stations.

Don’t just assume the aid stations will have what you need when you need it.

Some races are great with aid stations, others, not so much.

Will There Be Cups?

A small (but growing) number of races are going cup-free.

To date, this is still largely a trail running thing. It will take a while to reach large urban marathons, but I predict it will become more common to have zero waste and zero cup races, where you will have to carry your own hydration or your own cup.

What Else Do You Need To Carry?

The main reason (besides having water) I carry my pack on race day is that it is the best way I have to carry enough fuel to get me through a marathon.

I need the additional storage I get in my pack.

If you aren’t going to wear your pack, do you still have a place to carry your phone, fuel, and other race day gear?

What about you? Do you have any other pros, cons, or considerations about wearing a hydration pack on race day? 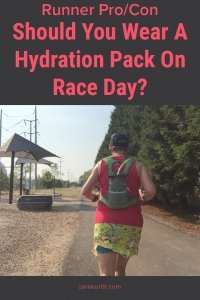