It’s a rite of passage (hazing?) for every new marathon trainee: the first time you go home after a long run and howl in the shower due to skin that was rubbed raw.

The nemesis of many a runner has stuck again: chafing.

Chafing is the friction between your skin and something else: other skin, clothing, your hydration pack, anything.

If you run enough miles, chafing will happen. There is no getting around it. Even with the best gear and ideal preparation, some days something just rubs you the wrong way (literally) and bam!

Step one in minimizing chafing is to know thyself. Every runner and every body type has different areas that tend to cause trouble.

Know Thy Fit and Fabrics

You can’t always predict what will cause chafing. Some days, and maybe just for a single run, even the most tried and true piece of clothing will act as a cheese grater.

Pay attention to the gear you are wearing when you have chafing issues. A while back, I noticed a pattern of getting underarm chafing, but only when wearing the shirts from one local race company (whose shirts are all made from the same fabric). I stopped wearing any shirts of that brand and I haven’t had underarm issues since.

Use gear that has the fewest possible potential trouble spots:

Not only should you never wear new gear on race day, you shouldn’t wear your new jog bra for the first time on a 15 mile long run (again, I know this one from experience).

Even a new piece of clothing that is identical to a piece you love may vary slightly and cause issues.

Take Care Your Gear and Retire The Old

This is TMI, but here goes: my number one chafing issue is the chest strap of my jog bra. This is my own fault. My bras are well past their useful life and the elastic is giving out. But since they don’t make my favorite bra anymore, I’m keeping the ones I have on life support.

The cost to me is a bit of chafing.

Gear with just the right amount of wear is perfect and fits like a glove, but those same pieces quickly turn into old gear.

Old gear is past its prime. It doesn’t fit as well. The fabric gets worn out. Elastic breaks down.

Body Glide, Aquaphor, and Vaseline act as lubrication between you and your clothing.

Use them. Love them. Apply them liberally.

There are dozens of options here in all textures, application styles, and active ingredients. I’m a user and lover of Bodyglide Original

(the stick) myself, but whatever your preferred application process and formula, there is a product for you.

If you have trouble…um… down below, consider getting a second tube of your product of choice dedicated to use in those areas.

Nipple Guards. The one area where guys suffer more than girls on a run is nipple chafing. I’ve never seen a woman with bleeding nipples at the finish of a marathon, but men with bloody nipples are fairly common.

I have no personal experience with the product, but the number one recommendation I have heard is NipGuards

I have read that staying hydrated minimizes chafing. This is either due to the skin being well-moisturized or that being hydrated lessens the salt concentration in your sweat (the salt can act as sandpaper).

I don’t know if this is true. Personally, I’ve never found a direct link between my hydration and chafing levels.

However, since you should always be well-hydrated anyway, I’ll add it to the list.

There is no downside to being well-hydrated. If there is the smallest chance of the unintended upside of minimizing chafing, so much the better. 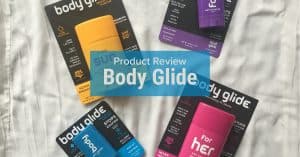 Too Late To Prepare: Problems Mid-run

Carry a small container of Body Glide or tube of lip balm that you can apply mid-run to lessen the impact of chafing-in-progress.

Adjust clothing or turn it inside out if you notice an issue mid-run.

It has happened to the best of us. You plan, you try to prevent, you adjust mid-run, and yet…

Please: If you are at all concerned about your chafing, please see your doctor (or the medical tent if you are at a race) and follow their advice.

Rinse off the chafed area with lukewarm water.

Fair warning: the first 20 seconds of a shower after a run where you have been chafed hurts like hell.

Literally, salt in the wounds.

Cover the chafed area with Aquaphor.

If the chafing is more severe you can use diaper rash ointment or Neosporin. These products both protect the skin and minimize/prevent scarring. 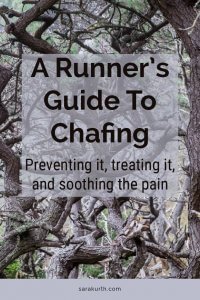 If you run, you will eventually chafe. But with some preventive measures, the severity and frequency can be greatly reduced.

3 thoughts on “Runners Guide to Chafing”