A few weeks ago, a meme was making the rounds on running Instagram. It was a bingo board with various statements about runners (‘I’ve lost a toenail,’ ‘I’ve run in the dark,’ ‘I’ve run on a trail,’ etc.). It was fun to see everyone’s results, but I was shocked by how few people had checked ‘I’ve volunteered at a race.’

Many of these folks have been runners for years. They have thousands of followers on social media, are active in the running community, are ‘influencers’ in the running space, and they’ve never volunteered at a race!?

Post after post was the same. Nearly full bingo boards with one space left blank: I’ve volunteered at a race.

I never would have guessed I was in such a minority.

Why Every Runner Should Volunteer At A Race

I love volunteering at races.

It’s all the excitement of race day, without any of the exhaustion (or at least it’s a different kind of exhaustion).

It Will Make You a More Empathetic Racer

One of my top racing rules is to always thank the volunteers.

This is partially common courtesy, but I also know from having volunteered at many races that it can be harder than it looks.

It is common on race day to get to an aid station and see no cups of water poured, volunteers in the process of mixing sports drink and dropped cups strewn everywhere having not been swept up. If you’ve never volunteered at a race, you may wonder what the heck those volunteers have been doing. Why don’t they get on it already and get stuff done?

Both as a runner and as a volunteer, I’ve heard racers chastise, if not downright yell at, volunteers.

This is never OK.

There will always be a rush of runners, and you’ll watch your stockpiled hill of pre-poured water dwindle. But the crush of runners never slows down – they just keep coming.

When you’ve been a volunteer, you understand this. And when you run your next race, you’ll take an extra second and wait for your water to be poured.

And you’ll say thank you to the volunteer who poured it.

You’ll Be a Better Racer

Volunteering at a race is a great way to see dozens (if not hundreds) of different running styles. Different types of gear and fuel. So many different ways of taking and drinking water.

Who knew there were so many variations of drinking out of a cup?

Spend a few hours at an aid station, and I guarantee you’ll come away with at least one new technique you’ll want to try.

Pro tip: if you know what fluid you want, shout it out. No volunteer has ever intentionally given a racer who wanted sports drink a cup of water (or vice versa), but if the volunteer doesn’t know what the runner wants until the last-minute, it is easy to end up with the wrong thing.

If you shout out ‘water’ when you’re 10 feet away from the aid tables, your chances of getting the right thing greatly increases.

You Can Test Out a New Environment Without Committing To Run

I was intrigued by the idea of a night race, but I wasn’t sure what it would be like – How dark would it be? How would the course be marked? I was a little scared of running it without knowing what it was all about.

What a girl to do?

After a few hours at the aid station, I knew how the course was marked, how bright the moon was, and how well the race kept track of every runner who was out on the trail.

Now, if I decide to do this race, I’ll know exactly what to expect.

Volunteering at a race can be a great way to learn about something new (a new race, a new type of race, a new race company) before you commit to running.

Seeing (and helping) all those runners work towards their goals? It is super inspiring.

I’m a marathoner in large part because I volunteered at the finish line of the Chicago Marathon one year when my mom ran it.

It was the single most inspiring thing I’d ever done. By the end of the day, I was pretty sure I’d run a marathon someday (and this was years before I started running).

Usually, running is all about you.

You, out on the course, pushing your personal limits.

Nearly every self-help book and ‘how to improve your mood’ list includes the idea of doing something for others.

It feels good to help others, to make their lives a little better.

Volunteering at a race does exactly that- helps other runners.

It feels great to help others.

Every race has their own set of benefits for volunteering, so what you get (besides good karma), varies significantly.

Sometimes you get a t-shirt and a sandwich.

Most of the trail racing companies in the Bay Area have deals where if you volunteer at one race, you’ll get free entry into another race. Considering the prices of race entries these days, that is a major benefit.

I usually volunteer a ton in my off-season between marathons. This year, a volunteering binge in April and May resulted in a summer racing calendar filled to the brim with races, and I didn’t have to pay for a single one!

It’s Good For Your Running Karma

I believe you get back from the world what you put into it.

If you are good to your fellow runners and do good for the running community, the universe will look upon you favorably.

It Can Be Fun

You really don’t need more of a reason than this – it’s a good time.

Volunteering at a race can be a ton of fun, and it’s a great way to spend a morning.

What about you? Have you ever volunteered at a race? 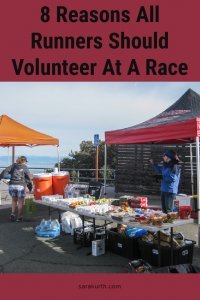