In the Before times, I regularly ran with my running club as a coach and pacer for its marathon training long runs. A few runners would take lots of photos and videos of the group, which were then shared on Facebook.

After one of these runs, the usual comments and likes appeared under that day’s video.

Amongst the comments was an observation made by one lady that, once made, none of us could unsee: The runners who carried hand-held water bottles all ran lopsided.

The hand holding the water bottle didn’t swing the same way the unbottled hand did, resulting in an uneven running gait.

Sure, the imbalances like those we saw on the group run videos are minor. Chances are, they won’t do any damage over the course of a single run.

But that same little imbalance or minor form issue, done on every run, over the course of months or years, can add up to major problems.

All parts of your body are interconnected (‘kinetic chain’ is the fancy term for it). A minor issue in one area can echo, and be amplified, throughout the rest of your body.

Common sources of running form issues can include:

Phones and water bottles are the likeliest culprits here. However, given the size of some GPS watches these days, they could also foot the bill.

Like in the video we watched from our group run, when weight isn’t evenly balanced between your arms, your arm swing won’t match, which can impact your form and your gait.

Or, having more weight on one side can cause you to lean (ever-so-slightly). This could go either way – you may lean more to the weighted side (cause it’s more weighed down), or you may lean to the lighter side (in an effort to counter-balance the excess weight).

This one is easily fixed, although ‘not carrying water’ isn’t the option I’ll recommend.

Use a SPIbelt or an armband to carry phones and other gear.

A good hydration vest can pull triple duty- carrying water, your phone and your fuel.

I know, I know, the fact that bad running form ruins your running form isn’t the most insightful observation. But I don’t mean this in (just) the obvious ways.

A tiny form issue in one area can reverberate throughout your body.

Looking down (instead of slightly ahead) can cause your neck to be slightly out of alignment with your core and your hips, which can cause stride issues.

Check in with your form regularly on the run. Even the best form at the start of a run can turn not-so-great as you fatigue.

Get to know what issues/form breaks are most common to you so you can watch for them. 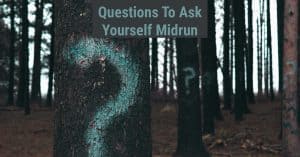 Tweaks To Your Form

I once went to a mobility seminar where the instructor gave us this scenario: Imagine your left pinky toe hurts (for whatever reason). He then told us to walk around the conference room trying to avoid using our one pinky toe.

I was shocked at how much it changed the way I walked (try it yourself if you don’t believe me).

A minor tweak to avoid one of the smallest and seemingly inconsequential bones in my body drastically changed everything about my movement.

Maybe you have a tiny little niggle in your ankle – so you change your form (ever-so-slightly) so it doesn’t hurt.

Or you favor your right side (ever-so-slightly) because you slept funny and your left side is sore.

These ‘minor’ changes, over the course time, can do some serious damage. And that’s in addition to whatever damage is causing you to tweak your form in the first place.

If there is any pain/niggle/issue that is significant enough for you to change your stride, get it checked out by a qualified medical professional (and before you ask, no, Google doesn’t count as a qualified professional).

Since running is such a repetitive activity, the same muscles are worked over and over. As a result, runners are at a high risk for muscle imbalances.

These muscle imbalances are a major source of injury for runners. Many cases of runner’s knee (especially in new runners) are the result of the quads and hamstrings developing at different rates.

But the impact of weak or imbalanced muscles isn’t always that direct.

Weak core muscles will inevitably cause slumping or slouching the longer you run.

A weak butt will impact your leg extension and stride.

This strength work doesn’t have to be complex or too involved. Just a few body-weight moves done after a run a few times a week can have a major impact. 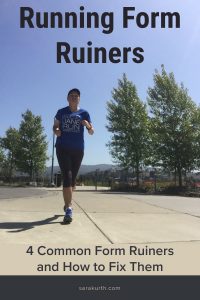