Running is as simple (or as complex) a sport as you make it. If you want to head out with bare feet and nothing else, that works. Or you can head out with thousands of dollars worth of gear, technology, and gadgets if that is your thing.

The Running Gear That…

… Made Me A Runner

When I started running, I wore a pair of shoes that my mom picked up at a garage sale.

I hadn’t been running for very long when I decided to head to the local running store (shout out to Gear in Edina, Minnesota!) and talk to a person who actually knew stuff about running. Based on their recommendation, I upgraded to a real pair of shoes.

For me, the shoes were Asics Kayanos. My first pair of Kayanos were version 4 or 5. The latest pair I got were version 22. They have served me well. I’ve never had a running injury that has taken me out of the game for more than a day or two.

The salesman made a great shoe match all those years ago.

Running fads have come and gone, but I have stayed true to my Kayanos. I’ll occasionally think about trying something new and always change my mind. I’m happy with what I have. I’ve found something that works for me.

It’s not broken (literally or figuratively), why fix it?

I save the novelty for my everyday walking around shoes. While I have no interest in running in them, New Balance Minimus Trail shoes are my favorite shoes for walking around in. They are especially great for traveling since they weigh next to nothing.

My takeaway: A pair of shoes that work for your body, foot shape, and running style is invaluable.

… Made Me A Marathoner

While in many situations this is a good thing, running is not one of them.

When I started running, there weren’t many jog bra options. The options there were focused more on being pretty than functioning well (OK, maybe that hasn’t changed all that much in twenty years).  I didn’t care about the number of color options, I only cared about function.

A few years into my running life, I discovered the Title 9 Frog Bra. They described it as a ‘major masher’ bra. It isn’t the prettiest thing you’ll ever see, but I couldn’t care less.

It makes running soooo much more enjoyable. Nothing jiggles or bounces that shouldn’t. A quality running bra made me willing to run the long distances required to train for a marathon.

There were a few dark years when they stopped making the Frog Bra. I had to make do with the ones I had, protecting them like they were my children, but I am so happy they are now back!

…Made Me A Trail Runner

I hate being thirsty on runs.

I carry water on all but the shortest runs, even in races where I know they will have aid stations.

Since the beginning, I’ve used various hip packs with a water bottle or two. My latest iteration has two little 8 oz bottles. It’s a great little pack and I still use it on shorter runs. However, unless there is a place to refill the bottles, they are of limited benefit on longer runs.

And on most trails, chances for refills are few and far between. Enter a hydration pack.

Some hydration packs are super-duper affairs and are more backpack than hydration system. Others were clearly not designed with women in mind and fastened uncomfortably.

Then I found the UltrAspire Alpha.

It has been the perfect solution for long runs on the trail. It’s comfortable and has tons of pockets for my gels, phone, and chapstick. The 2-liter reservoir is enough for all but the very hottest or longest runs.

I have never gone thirsty since.

My takeaway: Stay hydrated my friends.

The Gear That Has Made Running More Interesting

For those of you newer to running, let me tell you a tale of the days way back when, before GPS watches were a thing.

You had to get in your car to measure distances.

Knowing your pace involved a stopwatch, a track and math skills.

The first gadget I ever had that tracked distance was a Nike pod that you put on your shoe and that transmitted to a watch. It was an accelerometer, not GPS.

It wasn’t the most accurate thing in the world, but it still felt like magic.

From there, I upgraded to an early Garmin iteration have upgraded every few years as the technology has progressed. I currently I use the Fenix 3 and love it.

Unless I’m pacing a race, I’m not terribly focused on speed, pace, and all the other things that these watches do. But I find all that info interesting.

And sometimes, interesting is just enough to keep me going.

Runners are very particular about their socks. For me, nothing beats Injinji toe socks.

I historically have had issues with blisters between my toes. With Injinji Toe Socks, that is a thing of the past. Sure, even after years of wearing them they can still take a few tries to put them on properly, but they are so worth it. 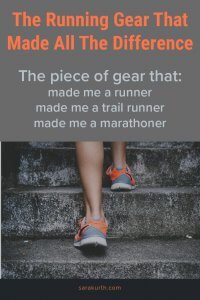