I felt like I was channeling my inner Andy Rooney with this admittedly rather curmudgeonly post, but sometimes I just can’t get an idea out of my head…

I was recently looking up phrases with the word ‘run’ or ‘running’ in them, because… well… that’s the sort of thing I do.

As I was going through the list, I was a little taken aback at how many of them were negative:

I’m not sure what to make of all this negativity regarding the word ‘run.’ I’m sure there is some grand linguistic reason for this, but in my (admittedly brief) research, I couldn’t come up with it.

As a runner, I feel like I should be a little offended.

Sure, it’s a useful, all-purpose word (just consider the wide variety of contexts it’s used in that list), but if it’s just that, why aren’t there as many positive running phrases?

Phrases like ‘run something by you’ or ‘hit the ground running’ aren’t really positive, but they are the few neutral phrases I came up with.

Then there are the phrases that actually relate to running:

I’m sure most non-runners would consider those phrases negative too. Heck, I’m a runner and even I dread hearing ‘let’s run another lap.’

Even so, I’ll resist categorizing ‘I’m going for a run’ as either positive or negative. My opinion on that can vary greatly by the day. 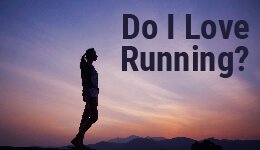 What about you? What do you think most ‘running’ phrases are so negative? 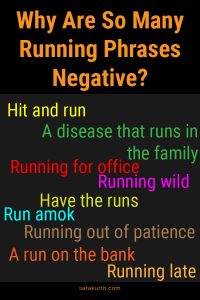