The common wisdom is that running fast is harder than running slow.

This is true if you are running the same amount of time: running fast for 10 minutes is harder than running 10 minutes slow.

But if you are running a set distance, especially a marathon, I would challenge the common wisdom. 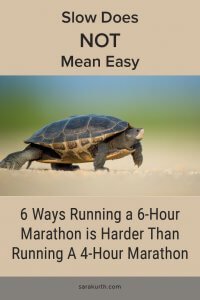 Slower Runners Have The Best Stories

To butcher Tolstoy, fast runners are all alike, but slow runners are slow in their own ways.

I think the best marathon stories come from the middle and back of the packers. They are the runners who have usually overcome the most to get to the start line.

In many cases, they are the ones who have overcome the most to even start running.

They often struggle and face the most self-doubt, and they have to stick with that self-doubt the longest on race day.

They have to fight the pace-ism (to steal a line from Joel Cohen, author of How To Lose A Marathon) of some elitist runners who question the validity of their efforts when their time is slow (which usually means anything slower than they are), or if they had the gall to take walk breaks.

All of which I have faced, BTW, and I’m a middle of the pack runner.

They are also often the most excited, proud, and enthusiastic finishers.

Last year Runner’s World did a great story on the spectators
that stay at the New York City Marathon until the last finishers come in.
Check it out if you missed it.

I once heard a story (likely apocryphal) about legendary running coach Bill Bowerman at the finish of a marathon, getting more excited as the day wore on and as the slower and slower runners finished. When he was asked why, he said that he’d never run for that long…

I doubt the story is true, but I want it to be. 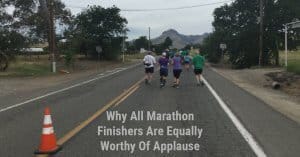 Why A Slower Marathon Can Be Harder

A major reason running a slower marathon is harder, is (not surprisingly) it takes longer.

You’re at it for a longer period of time. That means more time to…

…Be On Your Feet

The extra 2-3 hours of running is simply more time to be on your feet. More time for your ankles, knees, and feet to be pounding.

6+ hours is a long time to do anything. I don’t want to sit on my butt watching TV for 6 straight hours, but that is exactly what slower runners train for.

You have to fight the little voice in your head longer.

You have to fight doubt longer.

Fight the desire to quit for many more hours.

Especially at fall marathons, the temperature can vary greatly during race day.

It can be just as hard in the rain. Rainy race days mean that slower runners are chillin’ (literally and figuratively) in the rain for hours longer than their faster counterparts.

Trust me, your shoes get really heavy and wet in those extra two hours.

I’ve done many races that promise on-course entertainment. Even at 4:30 finish pace (which is solidly middle of the pack for most larger races), I very rarely see any of these performers performing. Many have already packed up and gone home by the time I pass them. The few I’ve seen perform didn’t look like they would be around much longer.

I don’t blame them, it would be a hard gig playing for 4-5 hours on a Sunday morning (most likely after having a late gig Saturday night). But these promised bands play an important role in providing a distraction on race day. One that many slower runners can never take advantage of.

Similarly, the majority of spectators along the course and at the finish line have left by the time the slower runner come through. So cheering and applause from the crowd can be sparse.

(But on the upside – this does make it much easier for slow runners to spot their people at the finish line).

The Tyranny of the Sag Wagon

Knowing you may butt up against a course time limit can add an extra layer of stress in the days and weeks before race day as you plan your race.

On race day, keeping an eye on both your performance and on a course time limit so you don’t get pulled off the course creates that much more stress to fight through.

This is something fast runners may not know even happens at races: they run out of stuff.

‘Sorry we ran out of gels’ or ‘Nope, no more water’ is not something a 3:30 marathoner will ever likely hear (and if they do, that race needs a new race director and logistics planner). But for slower runners, As race day goes on, refrains of running out of energy drink, food and sadly, even water can become increasingly common.

Slower runners need to be self-sufficient. We often can’t rely on the race to provide even the most basic needs, either at aid stations or at the finish line.

What about you? Do you think running a slower marathon can be harder? 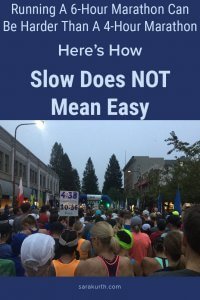