It’s great when you find running partners who run just the same pace as you, who want to push the pace at the same time you do and who want to take it easy when you do.

But this, not surprisingly, is pretty rare.

Usually, you are running with people who are either faster or slower than you. Hopefully, it’s not by a lot, but depending on your goals on any given run, even the smallest difference in pace can be an issue.

However, you can run with your faster friends AND meet your training objectives, you just need to plan ahead. 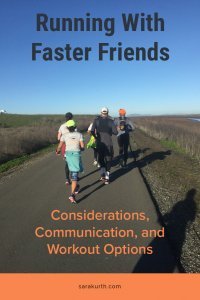 Considerations Before You Start

Before you head out the door, consider a few things to determine if trying to make a faster runner/slower runner combination work.

Is This The Time And Place For Speed?

There should be many kinds of runs on your calendar. Depending on your running goals, you may have runs at a comfortable pace, longer runs at a long run pace, shorter runs at tempo or race pace.

Some of these runs are better to do with faster friends than others. A marathon training long run (which should be the slowest run on your calendar), is not the time to join up with your speediest buddy.

But a mid-week tempo run? Fast friends may be the perfect running accessory.

Know Your Limits / Beware Of Ego

Groups can lead you to push yourself more than you would if you were running alone. This can be a good thing, but it’s a fine line between pushing yourself and pushing too hard.

Some runners have great body awareness and listen to what their bodies tell them. Others? Not so much.

And even if you do listen to your body, consider if your ego will allow you to slow down if you have to. It can be tough on a group run since it often means either leaving the group or making the group slow down. Either can be challenging.

What kind of running personality are you? How about those of your (potential) running partners?

Chill and adaptable? Intense and hyper-competitive? Neither is inherently good or bad (although I know which group I’d rather run with), but if you know going in you may need to ask others to slow up for you, some runners are more likely than others to respect the request.

Related is where you all are in your various training cycles. Generally speaking, runners who are in recovery mode or who aren’t training for anything specific can be more flexible with effort and pace on the run, while runners who are gearing up for a race may not have the same level of flexibility.

Communication: The Key To Any Good Relationship

Some issues can be addressed before they become issues by talking with your running partner(s) and setting a few ground rules before you start.

Know When You’ll Break Up

If one of you wants to go way faster or is having a bad run and wants to slow down, when will you break off and run separately? Talking about this before you start running can make it a lot easier if the situation arises later on (especially if there may be some ego involved).

Will you never split up?

If you and your faster friends do break-off mid-run, consider:

Who’s In The Lead

Consider if there will be times when the slowest runner should lead the pack. For example, you may want the slower runner to set the pace on uphills or on sections of single-track trail.

This could be done for safety (especially for trail runs) or to prevent the slower runner from pushing way too hard on the toughest bits. 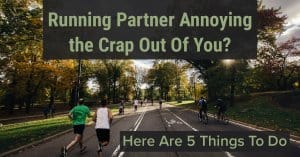 So how do you actually make running with your speedy friends work?

Everyone meets up as a group. A few miles are done together as a warm-up, then everyone splits off to do their planned run. You do your pace, and your faster friends to do theirs. You meet up again at the end and you do a cool down together.

While this may not be a true ‘group run,’ it can be a great option if you are more interested in having group run-type accountability than actually needing or wanting to run in a group.

This requires advanced planning, but find runs where your running goals match up with those of your faster friend.

For example, run together on days when you have a tempo run planned and your faster friend has a recovery run planned. Your paces for those runs are going to be closer together than if you are both scheduled to do a marathon long run.

Find a pace you both mutually agree upon.

This likely will mean you are running a little faster than you usually would, and your friend runs a little slower. Make sure the ‘compromise’ isn’t that you run at your faster friend’s faster pace. Both of you should give a little.

Tortoise And The Hare

Running with a faster partner can be a great way to work fartleks into a run.

You run together at your slower pace, and the faster runner occasionally speeds up to their usual (faster) pace. You speed up to catch up, then you both slow down to your slower pace again.

The Dipsea is a famous Northern California race known for its back-to-front staggered start. The slowest runners start first and the fastest runners start last. Maybe the faster runners catch-up, maybe they don’t. The idea being any runner has an equal chance of crossing the finish line first.

If you are willing to do the math, this could be timed so everyone meets up near the end. Or for the not-so-math-inclined, it can be kept casual and you meet up whenever you meet up.

What about you? Have you ever run with faster friends?