This was a not-great week of runs, topped off by a terrible, awful, hated-every-step-of-it long run.

I’m for sure in the midst of the training blahs… 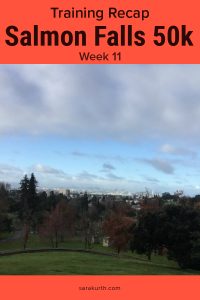 The core/leg one-two punch killed my confidence last time it came up, and I was dreading it again this time.

The core workout (done last Sunday) was icky (as usual), but today’s leg workout was merely tough. I felt moderately competent doing it, which is better than the last few times it came up in the rotation, so, yeah progress?

I like to post my runs in IG for accountabilty, but sometimes i just dont have a lot to say about my runs. Today's run was fine. Not amazing, not terrible, just fine. Not a scintillating caption to be sure.

‘The usual’ run followed by the Openfit barre class of the day: ‘Cardio 2.’

Doing a cardio class after a 5-mile run feels a little silly.

Given my earlier run, I’m OK with that.

So many s'pos'das on todays run. I was s'pos'da do a trail run. I was was s'pos'da do hills. I just… couldn't. I did a boring, flat, paved run instead. Some days, getting anything done is a victory, even if it wasn't what you were supposed to do.

So many shoulds this morning: I should run a trail, I should do a hilly run, I should…, I should.

But I really just couldn’t make myself do it.

Sometimes, you just have to do something. Something is better than nothing so I did 8 miles (the distance on the calendar), but did a flat, paved route.

I still wasn’t feeling it for barre either, but when I got home from the run, I had no water (the utilities district is doing work on the pipes outside my building intermittently for the next few weeks). I figured since I wasn’t going to be able to shower for awhile anyway, I may as well exercise a little more.

Maybe not the traditional rationale for working out, but for today, it worked for me.

Big thumbs down to the guy letting his dog run off-leash in the cemetery this morning. Letting your dog run free, chasing/scaring away birds, and pooping on graves is so not cool. You shouldn't even need the (very clearly posted) rules to tell you that. #karmawillgetyou

Ran over to the cemetery this morning, doing the hills that I so overtly avoided yesterday.

I’m sure doing all the extra barre and strength work will benefit me in the long run, but for the time being, I’m feeling it – and not (yet) in a good way. I felt these uphills!

That said, today’s Openfit barre class was of the stretchier variety ‘Flexibility & Balance 1.’ This one always feels good to do.

I considered sitting today’s barre class out. Tomorrow’s long run is hillier than normal, and the barre class is butt focused. Tiring out my lower body just before a hilly long run doesn’t seem like the best idea, but I ended up doing it anyway.

The Openfit workout of the day (the penultimate in the 30-day Xtend Barre program I’ve been doing) is ‘Booty 2.’

In the end, it wasn’t as bad as I anticipated.

My mother always says- if you dont have anything nice to say, dont say anything at all. This is what i have to say about this run: " ". This was the crappiest run in recent memory. Lots of hills, lots of wind, massive hamstring cramp the size of a grapefruit that plagued me the entire second half, but i was a coach and pacer for the 10:30 pace group for my running club's marathon training group, so i had to keep my pace, swearing, and attitude (at least externally) in check. They even ran out of snacks at the end so i couldnt drown my sorrows in chocolate milk and cookies #whydoidothistomyself

It has been a long time since I’ve had a run this crappy.

I don’t like this route and I dread it every time we do it with the running club. It’s nothing but hilly ups and downs the whole way.

Sure, I do hilly runs like this all the time while training for races, but today, I was a pacer.

Out the window goes my usual habit/coping mechanisms of walking on the uphills, slowing up (considerably) on the climbs, swearing under my breath (or not-so-under-my-breath), and talking to myself about how much I hate the run.

I’ve always found venting my frustration out loud helps get it out my system- and since I’m usually doing tough runs solo, I don’t care that the rabbits and squirrels can hear.

But today? I had to keep up my pace, try to keep up a fairly positivity attitude, and keep my swearing to a minimum.

Thankfully, I’ve run with my group enough to not have to be a total Pollyanna, but still. We did this route a few years ago and my whole group got a little too complian-y. It started as a fun little cathartic thing within the group, and quickly devolved into a not-at-all-helpful sufferfest. Ever since, I’ve been even more super aware of my overall attitude and that of my group when pacing.

So all I could really do is fume internally about how much I was hating it. That isn’t healthy (or fun).

And I wasn’t just not feeling this run mentally, I also wasn’t feeling it physically.

A niggling tightness in my right hamstring in the first half blossomed into a full-on knot/cramp the whole second half.

But I got through it, excited for the snacks the group supplies for the runners, only to find they had (again) run out of most of the snack options. What was left was all running really low.

Sure, I could have had a swig of chocolate milk or a handful of nuts, but that would have finished it off and left nothing for the runners behind me. I couldn’t stand the guilt of knowing I was responsible for the runners finishing later having nothing, so I only took a few animal crackers. There were pleanty of those.

The only upside today? It was a step back week for ultra training, so I didn’t have to head back out for a few more solo miles.

I don’t think I could have done it even if I was supposed to.

…I didn’t even get into the fact that this run is done on a road open to traffic that doesn’t have a shoulder or sidewalks. We had to spend nearly the entire run trying to not get hit by cars. It isn’t heavily trafficked, but enough to make it consistent and annoying.

It was the last thing I needed mentally.

Both my body and my mind needed a rest day after yesterday’s shit-show of a run, so I sat out today’s scheduled miles. I don’t skip planned runs often, but sometimes it’s just not worth it to push.

As I expected given my blah fitness mood of the weekend, it wasn’t great, but I know that was 100% due to my own mindset, not the workout itself or my physical ability to do it.

My additional strength/cross-training options are TBD.

Mindset. This wasn’t a great week, and it messed with my head a little bit.

I need to refocus next week and remember what I like/enjoy/get out of this whole running/ultra running thing.