To describe my week in a word?

Get back into the rhythm of running after my little training intermission. 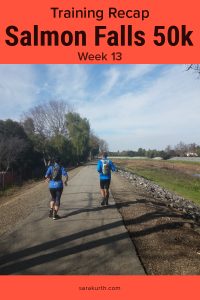 A few years ago, I loved an app called Asana Rebel. They had short little yoga videos (most about 5 minutes), great for fitting in those little slots of time.

The first year or so I used it, I’d say the videos were at an advanced beginner level. Some moves were a stretch for me (literally and figuratively), but all were doable.

Then they overhauled the app and made a bunch more videos. The new videos were super slick and SUPER advanced. I quit using the app not long after.

Every few months, I think I should try it again. I love the idea of the app and its short little videos. Then I do a video and remember why I stopped using the app.

Today, I again thought ‘I’m sure it wasn’t that bad’ and tried the ‘Let Go, Let Flow’ video.

Less than a minute in, I remembered why I stopped using it.

I saw it through to the end (barely), modifying what I could, but I still had to sit a few moves out entirely because I was so far away from what they were doing in the video, I couldn’t figure out how to adapt it for us less flexible folk.

I’m not sure who the target market for this thing is. If you are advanced enough to actually to the moves as shown, chances are you’d want to do a class that’s longer than 5 minutes.

Maybe they have more all-levels videos in the paid version of the app.

I always feel a little odd when i wear these running bottoms. They are too long to be shorts, too short to be capris. An odd thing to notice perhaps, but it crosses my mind every single time.

This morning was one of those runs that I (accidentally and unintentionally) timed perfectly. I do my usual morning run, with grey, threatening skies and get home just as the rain started.

Just a few minutes later and I once again would have been soaked to the bone.

Sometimes you just have to stop and take a selfie with the statue of Jack London (in his name sake square) because the mood strikes you, even when the people in the nearby restaurant give you funny looks.

I did the mileage on the calendar, but stuck to the flat route over to Jack London Square instead of the trails and/or hills I knew I ‘should’ do.

Maybe I’ll get some hills in tomorrow (or maybe I won’t), but in either case I’m OK with staying flat today.

So I ended up not doing the hilly route I’d considered yesterday and instead Frankensteined a few shorter routes together.

Rest day. I was going to do yoga or barre, but I didn’t. No reason, I just didn’t.

Friday night was one of the nights I had my volunteer cat gig, the one that was cancelled last week (mentioned in my Instagram post Monday).

I’ve been taking care of kittens every Friday night for nearly 3.5 years (it was not lost on me or my co-volunteer that we were two middle-aged ladies taking care of cats on Friday nights- sometimes you just have to embrace the cliche).

I’m such a creature of habit and routine – I’ll admit I feel a little lost to suddenly be without it.

It was long, it was arrow-straight, it was boring AF (from a scenery POV), but the company was great, we saw 2 bald eagles, and i totally nailed my pace (i was leading the 10:30 pace group), so it wasnt all bad

I hate this trail, although I don’t know why I hate it as much as I do.

Sure it’s flat and straight, but I do other routes regularly that are just as flat and just as straight, and I don’t bat an eye. I’ve never had a bad run on this trail (I don’t count boredom as a legit reason to consider a run bad), and in fact, my half marathon PR is on a  course that’s largely on this trail.

And yet… I hate it so much.

Part of it may be that the bikers on this trail are extra annoying.

On other trails, the bikes may be a little oblivious to runners, which is rude, but whatever.

On this trail, many of the bikers leave you feeling like they don’t want you on ‘their trail.’ On all trails, we are very aware of others using the trail and move over for passing, but on this one we pretty much have to get over single-file on the very edge of the path to not get yelled at.

It gets old after 3+ hours.

I was back to pacing the 10:30 marathon training group, and we all did as good as can be expected. We even saw 2 bald eagles just off the trail. I didn’t even know we had bald eagles in the Bay Area.

I’m also loving that the running club has mobilized all the bakers in our ranks and there is now a bumper crop of cookies and banana bread at the end of each run.

That (almost) makes up for the super boring run.

Did the run even happen if I have no record of it?

Get back into the barre, yoga, strength, or whatever cross-training.