It’s a two-fer this week.

I decided to take my own advice (for once) in week 14 and rest since my leg was still feeling funny after the long run from hell a few weeks ago.

I took more time to rest than I probably needed- without enough rest I wouldn’t even get to the start line, let alone the finish.

There is no upside to pushing it. 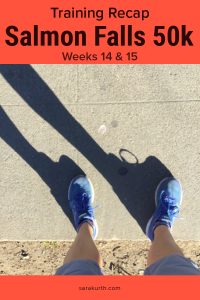 If you’ve been following along and paying attention, you may have noticed I didn’t post a week 14 training recap.

I didn’t just get lazy and skip it – there wasn’t anything to update.

Ever since that M*^&^*F*^king long run a few weeks ago at Carquinez Strait (I knew I hated that run), my right hamstring has felt funny.

I took a few days off and felt pretty good during my runs that week, until the group long run two weeks ago at Alameda Creek when it really acted up again. Alameda Creek and Carquinez are the only two courses that I actively dislike in the group’s training calendar. Is it a coincidence that I had trouble after the only 2 routes I hate? I think not.

It wasn’t terrible or earth shatteringly bad. It just was noticeably not right.

For once, I decided to take my own advice.

There is zero upside to running when something isn’t right. So I took the whole of week 14 off.

Even when I felt 100% fine on Thursday, I kept resting.

I’d actually notified the pacer coordinator for the group runs on Tuesday that I’d be out on Saturday for the long run.

I knew I’d be feeling fine later in the week and would be tempted to run, so I decided to take myself out of the equation early and rest regardless of how I was feeling.

Listen to my body

I am going to start up another 30 day Openfit program. After weighing my options, I’m going with the hybrid barre/Pilates program.

Day 1 of the plan is Cardio Fusion.

The instructor (the same one that did all the barre classes) gave some very Pilates based body cues, but other than that, I wouldn’t have considered it Pilates.

First run in over a week was… fine.

Did my leg hurt? I honestly don’t know.

I was trying not to obsess over it, but even so – I did.

When focusing on something as much as I was, it’s hard not to notice something. If I told you to focus entirely on your left pinky finger, I’m sure you’d start to notice an odd pain or niggle in your pinky.

I was noticing all sorts of other odd niggly sensations (like calf and hip pain -which were never issues before), so I’m pretty sure nearly all of it was in my head and the result of too much attention focused on one particular thing.

I don’t have a set calendar for this week. I decided to play it entirely by ear on distances.

Did 5 miles this morning.

I probably could have gone longer, but as has been my refrain for the last few weeks: why push it?

Did the next Pilates/Barre Hybrid class – ‘Signature 1.’

I’d done this class as part of the barre program. The workout part of it was fine, but I was soooo not in the mood for the overly peppy instructor.

I was going to do the barre class, but I noticed next up was and ab/butt class. Not a great idea before a long run.

Ever since my long run from hell a few weeks ago, my right hamstring has felt funny. I decided to take my own advice (for once) and rest. I took a week off from running, then this week i started running again, but took time off from posting on IG lest i feel pressure to run faster or longer than necessary for the sake of the 'gram (which has never been my style, but why test it now?). Today was the first real test- 20 miles pacing the 10:30 @lmjs_run crew + 6 miles solo. How was i feeling? Great! An utterly uneventful long run- the best kind of long run to have in my opinion. Maybe i should take my own advice more often- i seem to know what i'm talking about! #LMJS2020Training #ultratraining

Today was the test of how I was feeling, and honestly I was a little nervous going into it. And…It was a wonderfully uneventful run.

A few little twinges, but I am 100% sure they were in my head and I was overthinking it.

I paced the 10:30 group for my running club’s marathon training program, who were all running 20 miles. I had a sliding scale of goals for this run:

Considering I ended up doing 26.26 miles (I’m still not used to the marathon distance-as-training-run thing), I’m comfortable calling it a success.

My Garmin was acting up, so I don’t know what my pace was (according to my watch, I did a 3:50 minute mile near the end of the run. Um… nope). I know I was near the 10:30 pace goal for the first 17 miles (when I first noticed my watch going goofy), so yeah me!

A first this morning- as I was finishing up my solo miles, I ran under a tree dropping apple/plum kind of fruit. I was pelted in the collar bone by a piece of fruit (I think I ran into it as it fell, but honestly, I couldn’t reenact it if my life depended on it) and ended up with a little baby bruise.

I’ve never been attacked by a tree Wizard of Oz style before.

Back-to-back long runs are never really fun, but they are especially not fun after a marathon distance on Saturday.

Considering my inconsistent running over the past few weeks, this run went as well as I had any reason to expect it to. It was a little rough, but it was kind of a relief to have a run that was just a run-of-the-mill, running-on-tired-legs crappy run, not a ‘I wonder of this is an injury that will keep me from running’ crappy run. I know to expect a long run the morning after a marathon to be a little rough, that I can deal with.

It was super windy (I ended up losing power later in the afternoon due to downed power lines), but it didn’t impact my run other than having to dodge a few blown over trash cans.

Keep listening to my body as the taper begins.