The Salmon Falls 50k is in part a fundraiser to support the Juvenile Diabetes Research Foundation (JDRF). A portion of my race entry fee was a donation to the JDRF. I have also set up a fundraising page.

I am not inclined to do these fundraising things, but I am a brand ambassador for SPIbelt. The ambassadors for SPIbelt fall into one of two camps – runners and diabetics (who use the belts to hold the various sensors and pumps they need to survive). By following these fellow ambassadors who are diabetic (some as young as 4 or 5), I have learned just how terrifying it is to be (or have) a child with type 1 diabetes and how much a cure is desperately needed.

If you have the ability to do so, would you consider donating a few dollars to support the fight against juvenile diabetes? All donations are (of course) tax deductible.

And just like that, my training is (mostly) done and race day is quickly approaching.

This will be the last training recap. I’ve learned that recapping the last week of training is super boring both to read and write – it’s basically a cut and paste of me doing an easy jog, stretching, and getting increasingly antsy as the week goes on. 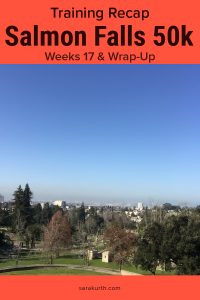 The Plan vs. Reality

I’m happy with my decision to bail (for the time being) on the Openfit 30-day hybrid barre/Pilates program. They are great workouts, but it is not the right time in my training calendar for it- physically or mentally.

In its place, I started the 30-day barre amplified calendar. This plan is all barre classes and is a new class every day – no repeats.

Between the taper, the race, and race recovery, I know I’ll be taking many days off from the plan and it will take me way longer than 30-days to complete, but I’m OK with that.

I like having a plan started, even if most of the workouts won’t be happening until after race day.

First up: ‘Xtend Signature 1’. I’ve done this workout before and liked it. This class was much better on my psyche than the Pilates workouts. After the workout, I felt moderately competent in my physical abilities, which is more than I can say for the Pilates workouts.

Today was the best kind of run you can have during a taper – utterly unremarkable in every way.

I got out, ran, felt good, and got home feeling like I had some idea of how to do this running thing.

So much better than many of last week’s runs.

Whistling through the graveyard on my 6 mile run this morning. The view (almost) makes all the hills worth it

Headed over to the cemetery (likely for the last time during this training cycle) for a short(er) hill(ier) run.

It wasn’t the best run ever, but at the very least it was (again) better than last week’s mostly walking outing.

People must be dropping like flies – two different crews were setting up for funerals. At one, they’d dug a hole only large enough to bury an urn. Is that a thing? I’m all for cremation, but it never occurred to me you’d then buy a cemetery plot to bury that urn. Isn’t that what columbariums are for? I guess it’s as good as any other option, but it struck me as odd.

Oh, the things you think about running through a cemetery!

Another run at the lake this morning that just felt good.

I know it’s the point of the taper, but these 4 miles felt so short!

When I got home, I did the Openfit ‘Balance for Runners’ workout again – a straightforward little workout.

I stretched and I foam rolled, but nothing else too crazy.

After last weeks run-on-your-own, the marathon training gang got back together for 15 miles on a series of trails in Concord.

Or, at least, we were supposed to get back together.

I really like this route, but for reasons I’ve never been able to put my finger on, it’s always very sparsely attended by the marathon trainees. This year was no different. I was the pace group leader for the 10:30 group. For the first 5 miles, we ran with the half marathon trainees (there are so many half marathoners!). When they turned back, it was just us pacers. We didn’t have any marathon trainees!

As a result, we ran by feel and didn’t pay much attention to my pace and the run was wonderfully uneventful.

Being in a slower pace group, I’m used to one of two states happening at the end of the run – either they run out of food and I get nothing or there is too much and those of us remaining get to take the extra home (guess which I prefer).

Today’s run was hosted by Road Runner Sports and they had snacks.

They had coffee (even the best supplied snack table usually runs out of coffee by the time I finish!), chocolate milk, OJ, yogurt, fruit, string cheese, and plain and almond croissants from a local bakery.

I was still at the store when the last pace groups finished and the manager insisted we take the extra croissants home with us.

You don’t have to ask me twice.

An easy lap of the lake this morning.

4(ish) miles with no watch and no idea of my pace.

Less than one week to go until race day!

Do I feel ready?

After my hamstring-induced rest and not a whole lot of time on the trails I feel like I shouldn’t feel prepared.

Maybe knowing this is a smaller, low-key, race sets the bar lower.

Maybe after a few ultras I’m getting more comfortable with the idea of them.

I didn’t hit the trails much this training cycle. The Saturday long runs (when I’d usually get the most time on the trails in), was taken up by marathon training program coaching and pacing duties and those runs are on the road. It always feels odd to me to drive to a trail to do a shorter run (it seems like a poor use of resources) so mid-week trail runs don’t usually happen.

My biggest concern going in to training was the two part long runs – when my training mileage would be longer than the marathon training groups and I’d have to go out and do extra solo miles.

They were never a huge issue. My ultra plan has many step-back weeks with decreased mileage, so the two training plans actually meshed together pretty well. And by sheer coincidence, the courses we were running on the weeks when I needed to do extra miles all lent themselves pretty well to extra miles (heaven knows I wouldn’t have done extra miles on the Carquinez Strait course, even if my plan said to do them).

With the Openfit barre classes, I had a much better completion of strength and mobility workouts ratio than I usually do, so that is a straight-up win.

I’m not going to lay out a specific plan for race week (I never followed the plan I set out for race week anyway). I’ll just leave it mushy – lots of foam rolling and a few runs of 3-5 miles.

I’ll play it by ear.

Get in the race mindset