It usually takes me a few weeks to get back into the rhythm of training; this time around it will apparently be no different.

Pretty much everything still got done, just not in the way, or on the day, intended. 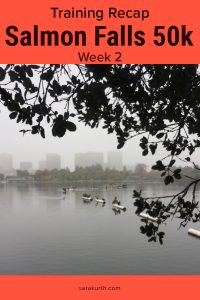 Get back into the rhythm of training. Figure out the right workouts, timing, and options to make sure everything gets done.

Another Yoga with Adriene YouTube video this morning – Yoga for Writers.

Great little half an hour. This program focused largely on the back and shoulders, adding in a few hip moves (to counteract all the sitting us writers do). While it had one down dog, it was only one and it didn’t have any sun salutations, so I can’t in good conscious hold it against this video.

Yoga for Writers is another video added to my ‘will do again’ list.

I will admit I was not in a great headspace to do an at-home yoga video this morning.

The first 5ish minutes are all breathing exercises and I just couldn’t focus. My nose was running (the recent winds have kicked up all sorts of dust and crap, wreaking havoc on me and my nose). The upstairs’ neighbor kid was screaming; The dog across the courtyard was bark-howling.

Not the right environment for quiet breathing.

For the record, all was quiet (physically and psychically) by the end of the half hour.

‘Just’ a 3-mile loop of the lake this morning.

This is the exact opposite of meeting my goal of finding new routes, but when you have a nearly perfect 3 mile route so close to home, why fight it?

I’ll save my new routes for distances without obvious options so close to home.

No core workout today, because…. well… no reason, I just didn’t do it.

The good (or bad, depending on my mood) thing about living at the top of a 3 block long hill is i never have an excuse to not do hill repeats. Did 4 miles at the lake this morning with the fabulous @cvelzo then 3 round-trips of this ugly beast of a hill (it looks worse in person). #hillsforbreakfast #upanddown

I met up with a friend (and former marathon trainee) of mine for a loop of the lake. I’ve been feeling a little anti-social lately, so I figured it wouldn’t kill me to be a little social on occasion.

No hill repeats on the run, but…

I live at the very top of a three-block long hill. Usually, by the time I get home, I’m in my cool-down mode, so I just trudge slowly up the hill.

Today, in the spirit of trying to get in more elevation work, I did three hill repeats of the whole gosh-darn thing to end the morning run.

I’d been happy with the Nike NTC app for a long time, but 1) they’ve made some changes to the app that I really don’t like, and 2) I’m trying to minimize my support of Nike considering the revelations about how they treat their female athletes.

The one I’m trying out now is the Adidas Training app (they keep changing the name of it, it used to be Runtastic, it’s now called Training by Adidas).

To give it a fair shot, I set up a new workout out program ‘6 weeks to toned abs’ which has me doing 2 core workouts a week for 6 weeks.

I like having a plan set up in advance; It removes the ‘What specific workout should I do today’ fight with myself. It was one of my (former) favorite features of the NTC app before recent changes removed the feature.

With 1 of 12 Adidas workouts in my new program done, I’m liking the app. Today’s workout was a 15ish-minute workout which had moves that worked both the core and the butt.

Didja ever have one of those days when you feel 4 steps behind? That was me yesterday. This is yesterdays run, that i never seemed to get around to posting. #adaylate Anyone have suggestions as to why my cameraphone may have stopped focusing? Even using focus lock results in blurry photos…

I would have sworn I had 3 miles to do today, and I didn’t check the calendar before I left the house.

This difference will make zero impact in my training, but it’s a good reminder I have to pay attention to this kind of stuff, especially since I’m changing up the plan a bit this time.

Did the second core workout in my Adidas/Runtastic app core program.

Today was another 15ish minute workout for core, butt, and lower body.

I’m 2 for 2 in really liking their workouts.

Now if only I could figure out how to get the moves to auto advance so I don’t have to check off each move as I do it.

It’s not a big deal, but it’s disrupting my flow, having to reach for my ipad after every move (first world problems, I know).

The plan was to volunteer at a race up at Stinson Beach/Mt. Tam in the morning, then do a few miles on the trails.

I tried to volunteer at this race last year. That race was cancelled about 30 minutes before the start due to poor air quality.

My plan this morning was to volunteer at the Mt. Tam trail run by @insidetrail races, so i wake up a 4 am (urgh), drive there, help unpack the truck and set everything up. Just as we started checking in runners, word came down from the park rangers that they would not let the race proceed due to a change in the winds. The race was canceled about 30 minutes before the start of the 50k. Not the morning anyone had planned. While everyone was disappointed, most of the runners were gracious and a few were very relieved. Many were saying things like 'at least we have homes to go back to. Many fellow Californians don't today.' #changeofplans #findthesilverlining #itcouldbesomuchworse

This year, I hadn’t planned on volunteering again since I’d already started training for my own race.

But as of Wednesday, they still needed volunteers. I’m a sucker for an SOS call for volunteers, and after the drama last year, I thought it would be nice to actually see people run this thing.

Once I was there and volunteering, I got in the spirit of it and I stuck around for the full day.

After helping pack up, the sun was about to set.

I probably could’ve gotten a few miles in, but I was tired and wasn’t feeling a night trail run (and I may have had a beer while helping pack up, probably not a great hydration option before a night trail run).

So instead, I sat on the beach and watched the sunset.

A good end to a long and exhausting day.

I felt TERRIBLE on my 9 mile run this morning, but for once i know exactly why. I volunteered yesterday at the @insidetrail Mt. Tam race. While i love volunteering at races, days like that mean a bad night sleep (the alarm was set at 3:30 so i could make it to Marin for the 5 am call), not enough water, not great food (eating off the finishers food table is tasty- all i can eat cookies and quesadillas!- but not so nourishing for my 12+ hour shift). Bad sleep + poor hydration + non-existing (proper) fueling = not great runs. Its running 101, and i paid the price for it today.

Me yesterday: Wake up at 3:30, not drink nearly enough water, not eat nearly enough nutritious food (volunteers can eat freely from the finishers food table, but there are only so many running-appropriate nutrients in quesadillas and brownie bites).

No shock that my body wasn’t in the mood to run today.

I still ran 9 miles, feeling it or not, heading over to (and around) Lake Temescal.

Most of my workouts got done this week, just not necessarily in the way I planned them, or on the day they were meant to happen.

Nutrition. I need to regroup and refocus on healthy meals that will better fuel my running.