I think I’ve cracked it! After weeks of overdoing it or underdoing it to find the right balance of running and barre (my recent workout of choice for mobility and strength work), I think I got it!

For those of you not following along, I’ve been doing the Openfit Xtend Barre workouts regularly and loving them, but left to my own devices (deciding what workout to do and when), I tend not to do them at all.

The app has pre-set up workout plans, but they are designed to be done 7-days a week, so following the plan, I overdo it (doing 7 30-minute barre workouts in addition to training for an ultra is a bit much).

This way I don’t have to figure out what workout to do (since the plan tells me what to do), but I also have a few rest days that I can slot in when I need them.

For this week at least, this approach worked really well. 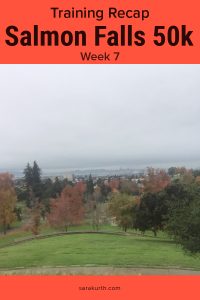 I put this one off as long as I could, but eventually, it had to get done – Openfit Xtend Barre: ‘Core 1′: Exhibit A of why it’s better for me if I don’t pick what workout I’m going to do.

I knew this class would be good for me, but there’s no chance I would ever inflict it on myself.

Many barre core moves involve mat work and moves where you are on your back with legs up (think the hundred or reverse crunches). I find these moves nearly impossible with my super-tight hip flexors, which prevents me from properly engaging my core.

I’ve done enough of these types of classes over the years to know the modifications I can use (I again had to modify the given modifications), but I still hated every minute of it.

Needless to say, I’m putting off the Adidas core workout I’d planned on doing today. Two core-focused workouts in a day is more than I can bear the thought of.

Witty caption for my post? Just leave it blank, I got nothin'

Unlike last week’s, wall-hitting 4 mile run, this week, I felt pretty good on the run.

My Openfit Barre program continues with ‘Booty 1.’ I really liked this class. While my tight hips again impacted a few moves, for the first time in a while, I felt moderately competent and could even do the ‘make it harder’ modifications a few times.

The whole last section was a mat-based bridge sequence. I can do those all week – score one for my runner’s muscles!

Some of the best views in Oakland are saved for the dead millionaires on 'millionaires row' at Mountain View Cemetery. Lucky for us, they share, although its a whole lotta uphill between here and there.

I’m really enjoying exploring Mountain View Cemetery on my mid-week hilly runs. There are so many little sections (and so many hills), not to mention amazing views of Oakland and San Francisco.

Today, I just made it to Millionaire’s Row where names like Domingo Ghirardelli (he of chocolate fame) are buried, or more accurately for millionaire’s row, entombed.

This is the first workout I’ve done more than once, so I knew what to expect. I loved the balance work and my ego took a blow when we focused on flexibility (of which I have none).

Another three workout day. I did the penultimate Adidas core workout, so 15-minutes of core work was done just before bed.

A 6 mile run from home (the flat version).

I called in a barre skip day.

Next up on the plan is cardio barre (ugh). I’m really not looking forward to it and it would be especially not fun after a run.

Since tomorrow is a rest day from running, I’ll save it until then.

I was dreading this one all morning – the return to Xtend Barre cardio. When I did the Xtend Barre 7-day plan, I got 10 minutes into the cardio workout and bailed. The instructor and her constant talking was driving me nuts, and the workout was more than I wanted after an 8-mile run.

The instructor wasn’t as annoying (although she kept yell/shouting. I kept thinking ‘you have mic, dear, you don’t need to yell’), and the workout was better.

Or maybe I was just in a better headspace.

Either way, I made it all the way to the end this time, so that’s an improvement.

I guess I just don’t look to barre for cardio. I get why these classes are part of the program – if this program is the only working-out you are doing (which is the logical way to go if you are doing 7 workouts a week with this plan), you need some cardio. For me and my needs, it just seems unnecessary.

I’ll still do the cardio workouts that are a part of the plan, but I’m not gonna feel too bad for half-assing them a little.

Another 2-part long run this morning. First 12 miles pacing the 11 min/mile @lmjs_run marathon training crew, then set out for another 6 solo miles (at whatever pace my heart desired). Even saw a bright, shiny thing in the sky i believe they call the sun. Havent seen that in awhile. #LMJS2020Training #DuckRunning

The running club headed out to one of my go-to middle distance routes today – the Lafayette Moraga Trail. It’s about 7 miles long (one-way) and is a route I do often when I want 12-14 miles paved bike trail.

The running club did 12 miles, and I again paced the 11:00 min/mile group. We started with a group of 8-9 runners. Eventually the half marathon trainees turned around. Then some marathon trainees who were doing shorter distances turned around (while out-and-back courses are never my favorite, they are nice for groups like this when you have a lot of people doing a lot of distances). By the last few miles, only two of us remained. We decided to run faster than our 11 minute pace (finishing with an average pace around 10:45).

While I would consider being this off-pace terrible if it had been done accidentally or because I’d stopped paying attention, we did it knowingly and intentionally, so being that far off is fine with me.

I then went out for another 6 solo miles. There are a few gravel trails near the Lafayette Community Center that I was going to do to get in some time on the dirt (and so I didn’t do the exact same thing twice), but many of the trails were closed.

According to the signs, they were closed due to wild pigs in the area.

There are wild pigs in Lafayette? Who knew? 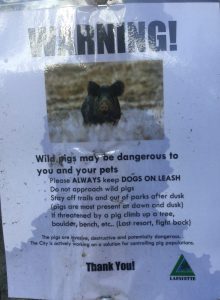 No barre today, but I did the last workout in the Adidas core program. I can’t say I got amazing toned abs due to this program (likely because I half-assed the moves more often than I’d like to admit), but I do feel like my core got stronger because of it.

Half-assing a move is still better than no-assing it.

Im always shocked that this route, which is largely pavement (but has some trail bits by the lake) climbs nearly 800 feet. Sure is easy to do hill work in the East Bay.

Another journey over to (and round and round) Lake Temescal. I felt not as terrible on the hills today. The goal I kept setting for myself on the hills was to keep running 10 seconds past the point where I wanted to start walking. I did this for most of the run.

Today was Xtend Signature 2. Your traditional, full-body barre class. I felt good, although I did notice that after running 18 miles yesterday and 8 miles today, my plies were a little lame (but I still did them).

One thing I’ve noticed with all the Openfit classes I’ve taken (in all disciplines) – they seem to go by really fast. They’ve mostly been a half hour long, but feel much shorter. Maybe it’s because we do this whole long sequence on one leg, then it is all repeated on the other. By the time all of that is done, half the class is done.

I’ll be travelling in Minnesota next week and have neither the gear nor the desire to run in temps that are forecasted to be in the -15 to 0 degree range.

I know I won’t be running the first part of the week, but I still plan on doing the Barre workouts. I’m OK with that.

Cross-training and staying active while away from my usual.