This was an odd, all-or-nothing week of workouts for me. I spent the first part of the week traveling to the frozen tundra (Minnesota) where there was zero chance of me running outside in near zero temps. Then I ended the week running a 35k trail race after basically not running in a week.

While my running (or not) was all over the map, I’m still doing my barre workouts regularly, so there’s that. 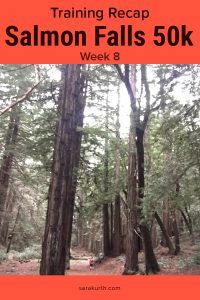 Cross-training and staying active while away from my usual.

Remember what I said last week about how the Openfit barre classes don’t feel like the 30 minutes they are? That they seem to go by faster?

While I stand by that statement for 95% of the workouts, it is not true for today’s selection ‘Core 1.’ I’m pretty sure this was the longest 30 minutes of my life.

However, I did feel moderately more competent doing this class this week than last week, so yeah progress!

Today, I’m in Minnesota, where the high temperature is supposed to be 12 degrees.

Running outside in this weather isn’t only about having the badassness to be willing to go outside and run in 12 degree weather. It also requires that you have the proper respect for that weather and dress appropriately with lots of layers and YakTrax to prevent slipping.

I am neither badass enough to run outdoors in this weather, nor do I have the proper gear, so my run for the day is off (as I expected).

However, barre is still on. Today’s selection was ‘Sculpt & Define 1.’

I'm in MN visiting family for a few days and have neither the gear nor the inclination to run outside in 9 degree weather. So instead, i went to the #winterwarmup at the US Bank stadium and ran laps of the upper concourse. I ran just under 5 miles (assuming i counted my laps correctly, which i likely didn't). I kept reminiscing back to my high school days when i rollerbladed at the metrodome (#rollerdome ). This new stadium is just a smidge swankier. #metrodome #usbankstadium #skol #skolvikings #minnesotarunning #runmsp #runmn

A two-workout day while travelling? I must say, I’m impressed with me.

First up was the Openfit Xtend Barre ‘Xtend Signature 1.’ Another repeat class that I liked the first time around and still liked this time around.

While outdoor runs are out while I’m home, Minnesotans get creative in the winter.

I’d been curious to see the new stadium, so it seemed like a very Minnesota thing to do to both run indoors and see the stadium for an $8 ticket instead of the $300 an NFL ticket would cost.

My run time was 45 minutes, so I figure my distance was somewhere in the 4-5 mile range.

I lost track of my lap count somewhere along the way, so I can’t say for certain, and heaven knows I can’t rely on my Strava GPS tracking. I don’t know WTF Strava mapped. The course was a perfect oval, and this is the GPS map that resulted: 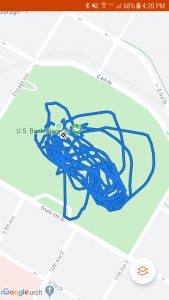 My travel day home (yes, I consider both MN and CA ‘home’) was also a rest day.

I could have done a barre workout, but I kinda felt like a rest day was in order.

#flatsara is maybe ready for her last race of the decade tomorrow morning in Woodside. After travelling all week, im out of my normal routines and its not hitting me that i have a 35k trail race tomorrow. Good thing im viewing it as a training run with a bib number more than a race. #runitr #flatrunner #runallthetrails #woodsideramble

Getting back to my normal routine at home, I did Openfit ‘Ballet Sculpt.’

While far from heavily choreographed, this workout does have more ‘dancey’ combos and I didn’t love it the first time I did it. Today, I felt a little more coordinated.

When I started this 30-day plan, I was a little surprised/disappointed that there were so many repeat workouts when there are many classes to choose from. Now that I’m in the midst of it, I’m glad they do it that way.

It makes it abundantly clear how/where I’m improving. I noticed it today, and I also noticed it during the core workout Monday.

My last race of 2019 (and the decade) is in the books! I felt surprisingly strong this morning at ITRs Woodside Ramble 35k and am really happy with my run. However, the layout of the course made it very obvious when each of the 50k runners blew past me, leaving me in the dust. Im totally fine with my slow (lets call it 'intentional') pace, but being continually reminded how much faster the lead 50Kers are wormed its way into my brain after awhile, taking me out of my race happy place. #runitr #woodsideramble #runallthetrails #runallthehills

This is a run on your own week for the running club training program and my pacing role with them. I took advantage of it to sneak in one more trail race of the year, giving me the chance to get some serious time (and elevation) on the trail. There weren’t a ton of race options to choose from and I ended up doing the Woodside Ramble 35k (which I kept thinking of as the Woodside Scramble).

The weather was perfect for running and I felt strong (even on the nearly 4000 feet of climbing on this course – ugh). However, a few other runners were driving me bonkers – namely a few runners pacing off me (which I’m fine with, I know I run a consistent pace and often have this happen even when I’m not an actual race pacer) and who were following waaaaay too close when doing so.

I don’t care if you pace off me (it’s a good incentive for me to push myself too), but give me a little f*@#ing space, dudes.

I was trying to stay zen about it (after all, it was my problem, not theirs), but wasn’t 100% successful.

A full race recap will be posted Tuesday.

With this race, I’ve now climbed over 100,000 feet for the year. This wasn’t remotely on my radar as a goal this year, but when digging around in Strava last month, I found I was getting pretty close and made it a last-minute goal. 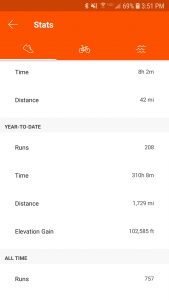 I usually would have skipped barre today (running 5 hours and climbing 4000 feet is enough of a workout for me in a day, thank you very much), but next up in the plan was ‘Flexibility & Balance 1,’ which is basically 30-minutes of stretching.

This actually sounded really good after a tough run. It wasn’t always pretty, but it ultimately felt good to do.

This was not my favorite run ever. Im still tired and sore from yesterday's race (running nearly 25 miles and climbing over 3600 feet, why ever would i be tired?) and it was raining. But being the good ultratrainee i am, i ran anyway, only to get caught in a downpour. I huddled in a doorway for the worst of it, but ill be drying out for days. #imgoingbacktobed #ultratraining #runanyway #whatdoesntkillmemakesmestronger

Back-to-back long runs are a big part of ultra training, and for the most part, I’m fine with them. However, there are some weeks where they really suck.

Today was one of those weeks.

I woke up still tired and sore from yesterday’s race, and had zero interest in running.

But being the good little ultra-trainee I am, I ran anyway. However, I did make two concessions: 1) I let myself sleep in a little (not heading out the door until about 9), and 2) I ran a flat route, not the hillier route I have been doing on Sundays.

It was lightly drizzling when I left home, and I felt a touch paranoid grabbing my rain jacket for the run. When I got over to Jack London Square (my turn-around point), the skies opened for a downpour. I actually had to huddle in a doorway for the worst of it.

My shoes are going to be drying out from this one for a week.

Next up in the barre plan is ‘Legs 1.’ There is zero chance of me doing a leg workout after the last two days of workouts, so I’m putting that off until tomorrow.

Work on my post-run cool down routine. I’ve been better about cooling down after a run, but my routine is often a little too willy-nilly.