I’m most consistent with my running (and my fitness in general) when I just head out the door and run as part of my usual routine. That may be boring, but it does make me a consistent exerciser.

After travelling and getting out of my usual workout routine, this week was a return to my boring, but effective, usual. 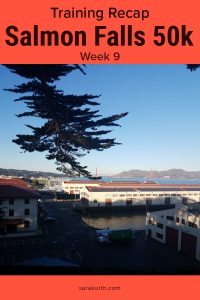 Work on my post-run cool down routine. I’ve been better about cooling down after a run, but my routine is often a little willy-nilly.

Happy #medalmonday Im still sore from this one. 24+ miles of running and climbing nearly 4000 feet, this race isn't easy, but it was so beautiful and worth (i think) the pain. Im surprised i came in almost last (46 of 50 runners) but i suppose its a pretty select group of runners that would inflict this course on themselves a few days before Christmas. #runitr #woodsideramble #runallthehills #runallthetrails

A cross-train/strength day means I return to my Openfit Xtend Barre series. Next up: ‘Legs 2.’

I was under the impression that, at least from a strength perspective, my legs were in pretty good shape.

This was a rough one on the ego.

I did my usual route near my house for this morning’s run.

I was only out of my running routine for a week, and yet it feels like I haven’t done this route in forever.

As is often the case, the core classes knock me flat and leave me feeling utterly incompetent.

Ho Ho Ho! I got a bunch of hills for Christmas! Just what i wanted! I hope everyone's celebrations (whatever they may be or not be) are enjoyable and relaxing.

I ran my hillier route to and around the Mountain View Cemetery on this grey Christmas morning.

The cemetery was a very popular place to be this morning. Many people were at graves (or dropping flowers), and many groups of families were walking the roads.

I’m still liking my approach of doing the 30-day Openfit Barre program, doing the 7-day a week plan, but allowing myself 1-2 skip days per week to use as needed.

I think I’ll up my number of allowable skips to 3-4 per week.

I feel like I’m just on the verge of overdoing the workouts, so maybe I’ll take my foot off the gas a little bit.

Or maybe that’s just my ego talking after having two tough workouts back-to-back. I may change my tune later.

For now, I’m using one of my barre skip days today. I’m really not in the mood for it.

I did 5 miles instead of the 6 on the calendar. Why? No real reason other than I wanted to run from home, and I wasn’t in the mood for the usual 6 mile route over to Jack London Square.

There were so many people out at Lake Merritt. I suppose everyone is taking the days after the holiday off. It also helps that the sun has finally returned for a few days so people are soaking in the sunshine.

This was my first time taking this particular class and I feel like a few of the combos are oddly timed. Although, once I do it a few more times and get the flow of it, I think I’ll start to like it a little more as a good full-body workout option.

#fbf To last weekends Woodside Ramble 35k. There is not a step of this course that is easy, but there also isn't an inch of it that isn't beautiful. Glad @letswanderphotography was there to caputure the beauty of the course better than i did.

I still hate this cardio class, but I have to admit it’s getting a little easier (relatively speaking) every time I do it. So it’s doing its job, whether I like the class or not.

It was a bridge-to-bridge kinda morning. First, me (and my shadow) lead the LMJS 11 minute crew on one of the best runs around- a 14 mile run from the SF Ferry Building to (and across) the Golden Gate. Then i did another solo 3 miles under the Bay Bridge to the park i still think of as AT&T. Perfect weather, great company – a wonderful run to end the year #LMJS2020Training #DuckRunning #ultratraining

My running club is based in Oakland.

Our group long runs are done throughout the East Bay. There is one exception to this – once a training cycle, we cross the bay and run in San Francisco, from the SF Ferry Building to the Golden Gate Bridge.

Like many in the group, this is one of my favorite runs, even if it means playing dodgem-cars with all the tourists on the bridge and in Fisherman’s Wharf (so many tourists!). Seriously people, if you are in SF, Fisherman’s Wharf is the worst place to go, it’s a tourist trap!

Even with the extra distance added in due to constant weaving around tourists, this run is totally worth it, especially on a sunny, clear day like this morning.

The group run was 14 miles, and I paced the 11 minute/mile group. I totally nailed my pace – averaging 11 minute miles (on the nose) for those first 14 miles. Then I did another 3 solo miles down the Embarcadero, running south to Oracle Park and back.

DON'T BLINK #theangelshavethephonebox #drwho #dontblink #whovianrunningclub I know ive been watching too much of the Dr. Who marathon on the BBC lately, but in my defense, i've always thought this statue guarding a mausoleum was a little too angel-like for comfort 👁👁

Today was one of those good runs.

I felt shockingly good on my run this morning. Even my pace was great (considering it was the second long run of the weekend on a hilly route).

Then I did the Openfit Xtend Barre class of the day: ‘Booty 1,’ a barre class that focuses (not surprisingly) on the butt.

This is the one class that has come up in the rotation a few times that I feel moderately competent at.

A good run and a not-horrible barre class!?

That makes for a good fitness day all-told.

I have a trail half marathon on Wednesday (New Year’s Day) and I’m still trying to figure out how to work that into my plan. Adjust only my other weekday runs? Do a shorter long run on Saturday? Leave everything else as is?

I think I’ll play it by ear.

A few mini-areas of focus: