I’d never heard of Salt Point State Park before I first did this race a few years ago, and it has quickly become one of my favorites. It’s Northern California trail running at its best – redwood forests, the crashing waves of the Pacific, and lots of elevation gained and lost between the two.

Salt Point is a bit of a drive (about 2 hours north of Oakland… well, usually. More on that in a bit), but totally worth it.

All the beauty of Mendocino or Carmel, but without the crowds.

This will be my first trail race of the season and I don’t feel remotely ready for it, but I have a ton of volunteer race credits stored up, so my entry was comped.

I couldn’t pass up a free entry at Salt Point!

I’m treating this race as a training run with a bib number and an excuse for a midsummer day trip/road trip.

As an aside, I LOVE the volunteer = free entry deal of that most local trail companies have. My entire summer racing calendar is filled with free races after my off-season (March/April) race volunteering binge.

I have zero notions of ‘racing’ Salt Point.

I’m still in the fairly early base building phase of my ultra training. I’ve been running a lot, but not terribly long distances. On the plus side, I have been doing runs with a bunch of elevation gain, so my power walk game is strong (I power walk, not run, the uphills). So I’m likely more prepared for the hills than I often am.

So my goal? Enjoy myself.

A vague goal, I know, but I don’t care about my finish time, I just want to be in nature and suck in all the sea air.

Wake-Up and Travel To

When I do a race that is a drive, I always weigh the pros and cons of staying at a hotel or camping closer to the start or just getting up god-awful early to drive.

I usually just get up super early. Most trail races don’t have many close hotel options, and if they do, they are often in super expensive places like Big Sur or Bodega Bay. If I’m gonna spend that kind of money for a Friday night hotel, I don’t want to be up and out at 6 AM. I’d want to enjoy the experience! Besides (my thinking usually goes), there is so little traffic at 5 AM, the drives aren’t too bad.

Well… I may have to rethink that logic…

On race day, I got up about 4:30, ate breakfast and got out the door. All’s good. I’d likely get to Salt Point with about 45 minutes to spare.

Until… I get maybe 3 miles from my house.

Not busy, not jammed. Not a few lanes blocked.

5 lanes of traffic could not continue. It took me almost 30 minutes to travel 1/8 mile.

There had been a shooting on the Interstate overnight, and everything was shut down for the investigation. Only a few hundred yards were closed (we took the off ramp and could get right back on the on-ramp), but 5 lanes of traffic funneling onto a single exit was a mess.

Something similar happened to me once before. I was driving home from a conference in Palm Springs to LA (where I was living at the time) so I could fly to Duluth for Grandma’s Marathon. A shooting on the interstate closed that interstate. However, that was in the middle of nowhere and there were no exits we could take and nowhere for us to go. So we sat. For hours and hours and hours.

I missed my flight and after a very stressful day flying standby, I made it – barely – to the start.

On this day, I got to Salt Point with about 15 minutes to spare. Suddenly, I don’t feel so ridiculous for always having a cushion built into my timetable.

I was very lucky that on parts of Highway 1 I only got stuck behind a few super-slow drivers, and all of them actually used the turnouts to let me pass.

Usually no one uses the turn-outs! 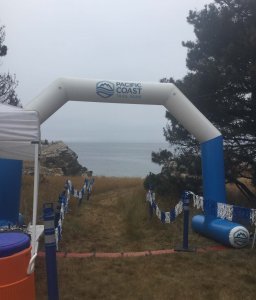 After my Interstate drama, I was a little out of sorts as I arrived at the park.

I was trying to be all ‘in the moment’, and letting my stress go (I do try to practice what I preach), but it is called ‘practice’ for a reason.

Salt Point has about a 5-minute walk from the parking lot to the check-in and start area.

By that point, I knew I’d make the start time, so I tried to use that time to take a few deep breaths and center myself.

At long last, the race starts!

The Salt Point 26k runs two loops, the 15k pink loop (named because it was marked with pink ribbons), then the 11k yellow loop (marked with yellow ribbons). The first 2ish miles of both loops were the same, then they split off.

It starts right on the coast. From there, there is nowhere to go but up.

And up it does go.

The first 2 miles are all uphill (most of the 2300 feet of climbing take place in the first 2 miles of each loop). It is a little demoralizing that after traveling for nearly 2 miles, I’m panting, sweating, and exhausted, and I know I’ve run maybe a half mile.

The rest has been an uphill power walk.

This is gonna be a long race.

But eventually, the climbing ends and after that initial hill, the course is rolling ups and down until it eventually drops back down to the coast.

But I felt stronger the longer I ran, which is a really good thing when you are training for an ultra.

I felt better and stronger in the second loop. I like what that says about my training and endurance.

‘Negative splits’ aren’t really relevant in trail running since the terrain and the elevation gain were different, but I have no doubt my second half was faster. 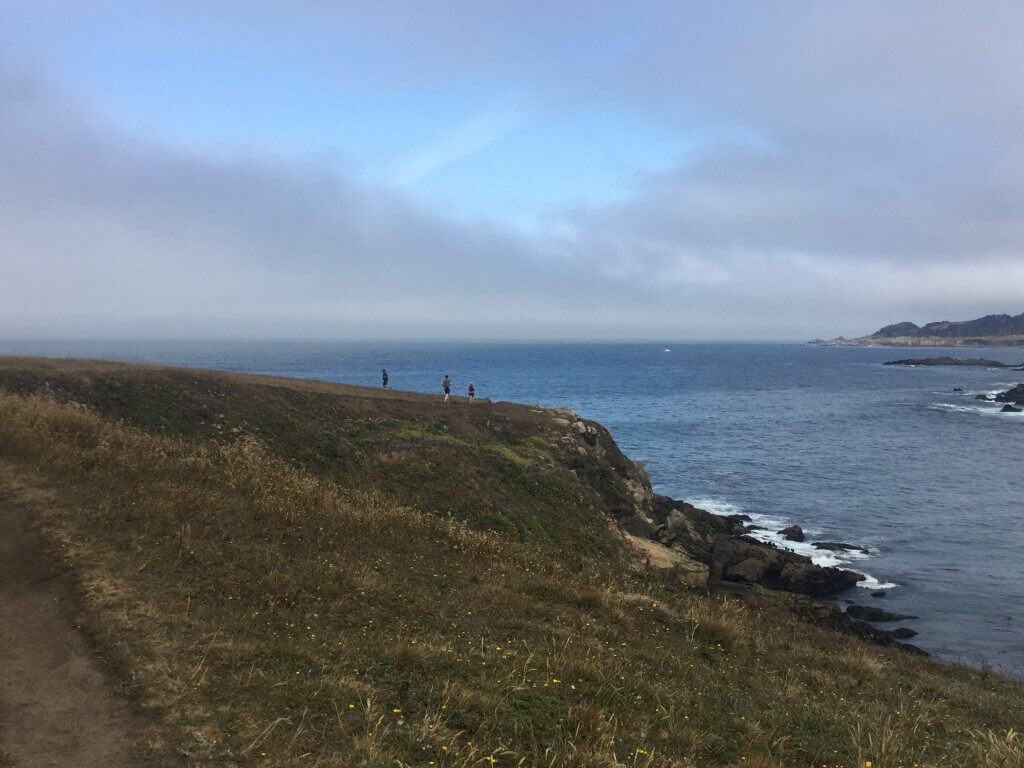 One of the best parts of Salt Point is all the different environments you run through. The coastline, redwood forests, the pygmy forest (which is apparently its own bio-diversity area, but it feels like a forest with net-yet-fully-grown trees), a little bit of prairie.

You name it, this run has it, at least for a while.

All the variety makes the weather hard to dress for. It was chilly and foggy at the coast. The inland bits were sunny and clear. There was (at least) a 15-degree difference between the two.

My finish time was 3:36.36. I like that time, it has a good numerological balance to it.

While I had no intention or plan to compare my race to last year, I did look it up for giggles. Last year’s time was 3:42. So yeah! PR on the course.

Just to make me feel slow, the 50k winner finished about 5 minutes behind me.

Pacific Coast Trail Runs prides themselves (rightly so), on their post-race festivities. Salt Point had a taco bar. Not a bad view for post-run tacos and beer. 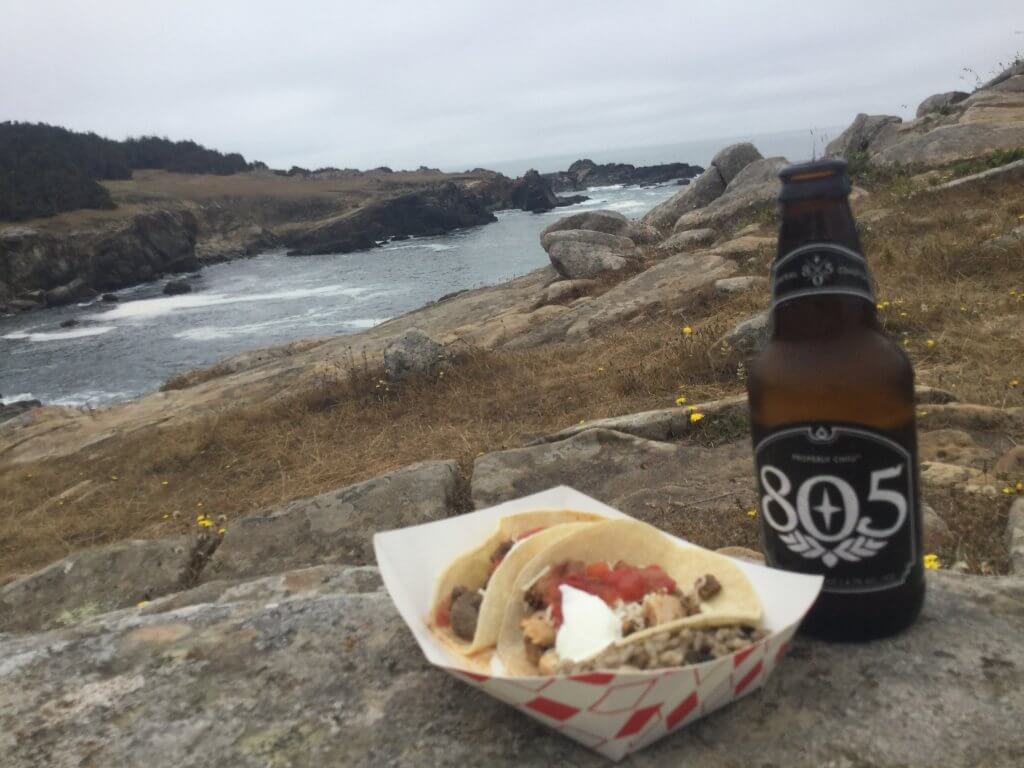 Making A Day Of It

Since Salt Point is a bit of a drive, I made a day of it and meandered back down the coast after my race. After doing the car shower (thanks @showerpill ) thing and changing into my smashing post run outfit, of course. I dance to the beat of my own fashion drummer, thank you very much #itsalook #icanpullitoff #teamzensah #pineapplesarecool

I made a day of my outing, and meandered back down the coast.

It was a little chilly right at the coast, and the coastal fog never really burnt off, so I didn’t hang out at the beach very long, but I still had a good time.

I may have stopped by Susie Cakes in San Rafael on my way home to get a massive slice of cake.

The Color Of The Season

I don’t claim any skills in spotting popular fashion (you only need to look to my post-race outfit above to see I define ‘fashion’ for myself), but I’m calling this now: the color of the season is a shade I’m calling ‘electric cantaloupe.’

The shirt of the right is the 2018 Trail Sisters gear. On the left is the race shirt from today.

I sense a pattern! 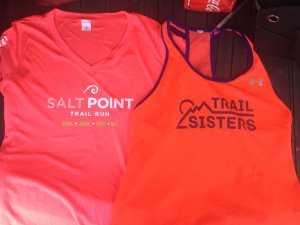 Considering I didn’t really have any, I’d have to say yes.

I am very encouraged that I felt stronger the longer I ran. As a training run, it was a success.

Although, I may have to revisit the camping options the night before considering the driving drama.

#flatsara is ready for the Salt Point 26k trail race tomorrow! The real Sara? Well…im treating it as really pretty training run with a bib number more than a 'race' so whatever happens, its all good! #flatrunner #toesocksornosocks #saltpoint #pctr #pacificcoasttrailruns

Bra: Title Nine Frog Bra (boo! this is my favorite and they again have stopped making it!)

Shoes: Asics Trail Sensor 5. I love these shoes, but they are reaching the end of their life and they don’t make them anymore. As it is, this was a spare pair I bought when I heard they were discontinued. I’m on the hunt for new trail shoes. 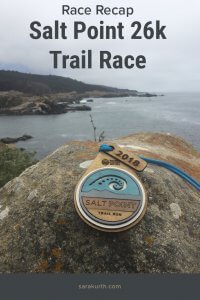