Santa Cruz will be my first race since the American River 50, which was in April, but which seems like a million years ago. I feel vaguely nervous about this race, but I can’t put my finger on exactly why.

I’m currently training for a 50k in October. I’m running the miles and following the plan, but I feel like I’m only going through the motions. There just isn’t the focus on the training or the ultimate race goal.

But the upside of volunteering at as many races as I do is I always have a cache of free race entries to use, so I can register for races I otherwise wouldn’t do, even when I’m not really in a racing mood.

I can do races (like this one) as a training run, that just happen to have bib numbers, aid stations and food at the end. 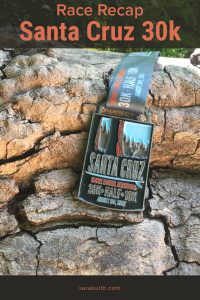 This ‘race’ is a low-key as it gets for me. I have zero expectations of my performance.

My only goal is to have fun and feel like I’m getting into some sort of racing rhythm.

I did the half marathon version of this race a few years ago. The half is basically the same course, the 30k just does an additional loop. I vaguely remember doing it, but other than a few specifics (namely the river crossing and the sound of the train whistle from the nearby Roaring Camp railroad), going in, I couldn’t remember which race memories were from this race.

There are a ton of trail races and routes in this area and they’ve largely blended together in my mind.

I’m not sure what I was dreaming about when my alarm went off, but my alarm utterly baffled me.

I had no idea what day it was or why my alarm was going off so early.

Interesting start to the day…

On the drive down to Santa Cruz (about an hour drive), I realized much of my pre-race anxiety is due to parking and travel issues.

I’m an obnoxiously prompt person and I know a lot can happen on race morning (as my journey to Salt Point last year showed). Add in that many of my races are in small parks with limited parking.

As race day nears, I’m generally more nervous about parking logistics than I am of the idea of running 18+ miles.

As is usually the case, travel and parking wasn’t an issue and when I got out of car near the start line, I had one overwhelming thought: Dang the redwood forest smells good.

As you’d expect from Santa Cruz, the race was largely in the redwood forest, but there was one aspect of this course I’d totally forgotten about: the sand.

The first 3ish miles are in the ‘sandhill chaparral.’ Read: sand. Not little bits of sand on a dirt trail, or the kinda sand you might find that has brushed off of sandstone. Loose sand. Think running on the beach kind of sand.

I went to the visitor center later (yes, I’m the sort of dork that can’t let a ‘hmm, I wonder why that is…’ go unanswered), and learned the sand is the remnants of an ancient seabed. In the middle of the redwood forest.

The highlight of the race (for me) is the river crossing. When I did this race before, we were in the midst of a drought, so it was more of a river wading. The one silver lining of living in a multi-year drought is it makes river crossings much easier.

Not so much this year. It was up to my thighs and refreshingly cold. 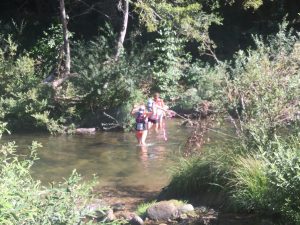 Overall, the course climbs about 3000 feet (moderate for the area). Unlike some races that are all-up followed by all-down. This course is up-and-down the whole time, which I much prefer.

The half and 30k started at the same time.

That means a whole lotta people are on the trail at once. It was a good 2 miles before the crowd thinned out. Every tree root or slight trail narrowing resulted in us all bottle necking and walking.

And all those people kicked up a ton of dust and sand which resulted in us all choking on dust for 20 minutes.

Even a 10 minute difference in the start times between the two races would have made a huge difference.

I know the trails are open to all users on race day. Other runners, hikers or bikers have the same right that I do to be on the course.

But dear god the mountain bikers were annoying (and in many cases, dangerous)

Yes, they have every right to be on the trail, but they knew a race was going on (or at least they knew there were an unusually large number of runners out), so maybe don’t tear around blind corners at top speed?

I totally lost count of the amount of times I got pushed off into the weeds because bikers couldn’t (or wouldn’t) make room for anyone else.

For trail runs, courses are marked with colored flags. If you don’t see a flag every 10ish minutes, there’s a chance you’ve gone off course.

In my history of trail running, I’ve only come across 1-2 people who have stopped ahead of me asking about if I’d seen a flag.

During this race, I had 3 different runners stop at different points asking about trail markings.

The course was marked well, so I’m not sure why there was such an uptick in people being aware of it.

The best I can figure is it’s a sign that there are many first-time trail runners who are super-aware of markings.

I won my age group!

After the race, I hung out and ate a bit, then did a short nature hike at Henry Cowell Park, then went over to the Roaring Camp railroad (Thomas the Tank Engine was there on tour, that’s a first!)

When I was done with all of that, there were still a few runners on the course, but I was still 1 of 1 in my age group. Sure I was first, but I was also last.

All the last runners on the course must have been in my age group since I end up 1 of 5.

I had it in my mind to treat this race as a training run with a bib number.

I may have taken that a little too seriously since I kinda kept forgetting I was doing a race. I’d be running, getting lost in my own thoughts, then I’d wonder why there are so many people out on the trail with me.

The first miles were crowded (see annoyance #1 above).

After it thinned out, the next 8-9 miles were kind of meh. Not bad, really, I was doing my thing, feeling OK, but I kept looking at the distance on my watch and it was barely creeping up. I was very aware of the fact I was doing a tough trail run.

In true ultra runner fashion, it wasn’t until about mile 14 where I felt like I got into any kind of rhythm.

I won’t say the last 4 miles were easy, but they went by in a snap.

Inside Trail Races (the race organizers) are one of the race companies that has beer at the finish.

I want to like a cold beer at the finish of long dusty trail run. If they’re there I’ll have one, but it never really does it for me. Today I tried something new – a cold hard cider.

Now that hit the spot!

Would Do This Race Again?

But those damn mountain bikers…

I won’t go out of my way to do this race again, but if it fits in my training calendar (especially if I have free volunteer race credits to use), I’d make the trip and do it again.

I’ve somehow arranged it that I’m running a race every weekend in August.

#flatsara is ready for the @insidetrail Santa Cruz 30k tomorrow. Real Sara's not so sure. This will be my first race since my 50 miler in April, and if im honest, im a little nervous about it. Im thinking of it as a just another training run (just with a bib number), so whatever happens is cool by me. #flatrunner #letsdothis #trailrun #trailrace #GUforit

Wow, notice a theme? Anyone want to sponsor a middle-of-the-pack running blogger so I can finally retire my old gear?