I’ll be a pacer for the 4:53 pace group at the Santa Rosa Marathon (Santa Rosa has many runners aiming for Boston qualifying times, so the pace groups are designed around those times). But ‘4:53’ doesn’t exactly roll off the tongue, and it feels odd to say I’m pacing a group that’ll finish in a time starting with a ‘4’ (when I pace marathons it’s usually the 5-hour group), so I still think of it as a 5-hour group.

While I have paced the Santa Rosa half several times, this will be my first running of the full.

Since I’m at the point in my ultra training where my long runs are in the 26-mile range, I’ll be treating this race as a training run, not a goal race. It will be so much more fun than running 26 miles on my own, which is the alternative (and which I’m going to have to do again in a few weeks).

Because A Marathon Just Isn’t Enough…

I got the chance to do the ‘Double Barrel Challenge,’ doing the 5k on Saturday, and the full on Sunday.

It’s very telling of my mindset that when deciding between the 5k and the 10k on Saturday, I thought doing the 10k seemed excessive.

Really!? That’s where I am going to draw the line of ‘too much’? 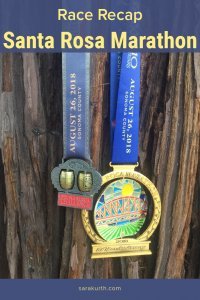 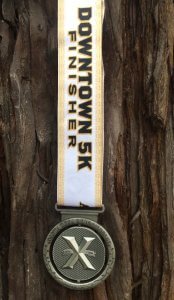 I can’t even tell you the last time I did a 5k race, and now I kinda of remember why.

It’s a blow to the ego to be trounced by 7-year-olds.

I was dodging strollers for 3 miles (how did slow walkers get so far ahead of me that I was passing them at the 2-mile mark?)

I was cut off more times than I can count since the field was largely runners who don’t know race etiquette (specifically: you need to leave more than a foot of space between you the person you are cutting in front of).

But ultimately, I felt good and it was a fun little shakeout run

An aside – when did 5ks start giving finisher’s medals?

Santa Rosa is about an hour’s drive from home (in light traffic). It’s rare for there to be light traffic on the 101N, but 5 am on a Saturday is one of those times.

My original plan was to drive up and home on Saturday after the 5k, then up again for the marathon.

But I am still a little spooked by my travel issues this summer (thanks, Salt Point), and when I’m a pacer, missing the start because of traffic is absolutely not an option.

So when friends offered to let me stay in their hotel room (walking distance to the start), I took it. Last-minute change of plan – I’m hanging out in Santa Rosa all Saturday.

On my suddenly free Saturday in Santa Rosa, I worked at the Marathon expo a bit, and explored the town a little bit.

I have a new tourist slogan for Santa Rosa: No Such Thing As Free Parking. I’ve fed more parking meters today than I ever have in my life.

This is the most out of sorts I’ve ever felt pre-race. Since this is a training run for me, I didn’t have my usual marathon hoopla and build-up. I didn’t taper, I didn’t do much of a carbo-load (no more than I usually do for long training run, anyway).

Nothing was cuing my head that I was running a full marathon.

Then I’d remember I’m running a full and I’d start to get worried that I wasn’t getting worried.

The last-minute change of plans to stay in Santa Rosa added a little to my out-of-sorts feeling. I’m usually a super-organized packer and planner for get-aways, but this time my overnight bag was a little thrown together (but I do have a Race Packing List so I at least knew I had all my running gear).

Not helping my mental state was I found out there are three pacers in my group. I prefer to pace alone. I have complete faith in my ability to create a race strategy and hit my goal time (and my track record bears out that ability). When there are multiple pacers, differences in race strategy and pacing often come into play.

However, I get it that most races want multiple pacers, so I know that especially for marathons, I’ll be with another pacer.

Race day weather was chilly. Mid-50s, gray skies and an almost drizzle in the air that stuck around for the whole race.

I really liked the Santa Rosa Marathon course. The first and last few miles were on a paved trail alongside a creek. The rest of the course was largely on little 2 lane roads in wine country, passing by vineyards, and in one case, through a winery.

There was one stretch of blah running (about miles 14-16) along a larger highway with no scenery to speak of, but it’s hard to lay out a 26-mile course anywhere that isn’t going to have a few dead spots.

A few years ago, several runners went off course at Santa Rosa. As a result, The Santa Rosa Marathon is now super well-marked. The first few miles are around downtown. There were cones nearly every foot and there was tape connecting the cones.

You’d have to hurdle over something to go off course.

Only In Wine Country…

We ran through the DeLoach Winery and Vineyard where they (of course) had an aid station giving out little shots of chilled chardonnay.

I’m usually not a chardonnay girl, but it tasted really good.

I’d forgotten how much I hate it when road marathoners drop their trash and their empty gel packs where ever they darn well please – it hurt my little trail running heart.

I’m so used to trail runs where there is zero tolerance for dropping trash anywhere but at an aid station.

Santa Rosa has a ton of aid stations, you really couldn’t carry your trash less than a mile to dispose of it properly?

So How Did It Go?

I really debated how I felt about this race, and I ultimately decided I have three answers.

There is my race as a:

From the perspective of me as a runner doing my own marathon, I totally rocked it.

Like the Golden State 35k last week, I had a total time warp thing happening – I sure don’t feel like I ran for nearly 5 hours. I started running and stopped 5 hours later, feeling like I’d run for maybe 2.

I had zero issues. No physical issues (no cramping, only very slight chafing), no mental issues (no wall, no real boredom even).

Ahead of the race, there was a little niggling worry about how all my trail training miles would translate to a road marathon.

I needn’t have worried.

As An Individual Pacer

Me, As A Member Of The Pace Team

As a member of a three-person pace-team, this was one of my least-favorite pacing experiences ever.

My co-pacers (at least in the first half) were running waaay fast and were often a good 1/4-1/2 mile ahead of me. I knew I was doing the right thing, but even so, I began to question myself. Was my Garmin off? Am I maybe not such a great pacer? How can both of them be in agreement and yet be so far ahead of what I knew was right?

But I stuck to my guns and ran the pace I knew I should run, which left me running alone and feeling more than a little foolish.

In talking with other runners, several mentioned something along the lines of: ‘shouldn’t you catch up with your other pacers?’

I didn’t want to call out my fellow pacers on the course so I couldn’t say ‘Well, no, they are actually running way too fast’ and I couldn’t, in good conscience, run a pace I knew was 30(ish) seconds too fast, so I couldn’t join them, so I had to keep making excuses about why they were so far ahead.

They slowed down a lot in the second half, and ended up finishing about 30 seconds ahead of me. It was the closest I ever came to running with them.

I just kept feeling like everyone I passed must be wondering how bad of race I must be having that I couldn’t keep up with my fellow pacers (I kept coming back to the word ‘foolish’).

I like pacing because it lets me support other runners – I enjoy helping them accomplish their goals.

Today, as a pacer, even though I nailed my finish time, I served zero purpose.

I don’t feel like I helped anyone during this race, which is super-frustrating because that’s the whole point of my being there.

Unlike other marathons I’ve done lately (ahem, Oakland), Santa Rosa still had food for runners by the time I finished. What a concept!

Pancakes (with strawberries and whipped cream) and beer.

What more could a runner want?

I have 2 whole race-less weekends before the next race: my return to my trail racing nemesis: Drag-N-Fly