My running calendar, which somehow found me running a race every weekend in August, caps off with a biggie – pacing the 4:40 pace group at the Santa Rosa Marathon.

4:40 is a faster pace group than I usually lead, and honestly, I’m a touch nervous about it. In the past year, my running paces have gotten quite a bit faster, but since most of my longer runs and races are on trails, I have no idea what my road marathon pace is anymore.

I know it won’t be an issue. When I pace, I usually lead the 5 hour group and do that comfortably. The longer runs I do on the road are easily within the pace range of a 4:40 marathon, but why would I let reality get in the way of a little pre-race paranoia?

For me, Santa Rosa will be a training run for my 50k in October.

No matter how many times I do it, registering for a marathon as a training run doesn’t feel any less weird.

Nothing more, nothing less. 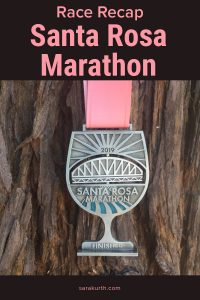 Once again, I face the eternal question – do I get up at the butt-crack of dawn and drive the morning of or dish out more money than I’d like for a hotel room in wine country where I likely wouldn’t sleep well and would have to be up and out super early.

The drive actually isn’t so bad at 5am when there is zero traffic (the same can’t be said for the drive home, but the less said about the traffic on the drive home the better).

Much like my realization that I’m more nervous about traffic and parking issues on trail race days than I am about running I had at Santa Cruz, I realized on the drive up to Santa Rosa that my pre-race nerves when I’m pacing have nothing to do with running a marathon. I’m more nervous about if I’ll be social enough.

I am the classic introvert, and while I can be perfectly social when circumstances require, I’ve done other races with crazy extrovert pacers.

One year I was running the Big Sur Marathon as a civilian (a/k/a I wasn’t on the pace team), and I was leap-frogging a pacer who (I looked her up later) billed herself ‘the party pacer.’ She was singing and had balloons and didn’t stop talking… ever.

It drove me bonkers and there was no chance I could have ever run with her.

While I encourage my runners and keep up some degree of conversation when I pace, I know I’ll never be ‘a party pacer.’

I’m always afraid on race day that someone will want to run my pace and will be disappointed I’m not the party they hoped for.

I know this is absurd.

There are all kinds of runners and pacers. Some want a party, some want silence, some want light chit-chat. I only can do what I can do (I’m running a marathon too, after all), but it’s still something that occupies my thoughts, especially the night before I pace a race.

After 20-years of running, I can still have running firsts. The Santa Rosa Marathon bib number was vertical (and in the shape of a wine barrel).

It starts and ends on a paved creek trail, and then meanders through wine country, running through little side roads by wineries and vineyards.

Rolly hills, but nothing too insane.

The highlight of the run comes just before the halfway point, when we run through the barrel room of DeLoach winery (one of the marathon sponsors). It’s so very wine country, though I found it odd they were blasting Guns and Roses as I ran through it.

Just after the barrel room, they have a chardonnay aid station. While I’m not a huge white wine fan, when in wine country, a shot of chardonnay at mile 12 seems like the right thing to do.

I’ve written before about how a 6 hour marathon can be harder than a 4 hour marathon. Today’s weather was a perfect example of this.

The morning was cloudy with the marine layer; I was actually pretty chilly at the start.

At my pace, it was perfect running weather for first 15ish miles. The next 5ish miles were sunny, but the temperature was still pretty reasonable. The last 5 miles (again, at my pace) started to get hot, but most of those miles were on a mostly shaded path.

When it got hot, it got really hot, really fast.

The fastest runners were already done by then and never had to run in the heat. But many of the slower runners were still on the section of the course (miles 14-17) that are fully exposed when it started to get super hot.

The slower runners were still running when the temps got over 90.

When I pace, people usually fade in and out of my pace group. It’s pretty rare for people to stick with me for the whole race. Talking to other pacers, I know this is a common pacer experience.

This year, I had a group of 4-5 runners with me for the whole first half and one runner who stayed with me the entire race.

She was my kind of runner. She was doing her first marathon and had a race plan. When talking in the starting chute before the race, she knew her goal was to run with me the whole time.

I’ll take race day cheers however I can get them, even if it’s from someone else’s cheering squad.

My Pacing To Do

Before my next pacing gig, I need to bone up on a few trivia questions that are good for running.

Questions people can mull over for hours.

I have two go to trivia questions, but I never remember the full list of answers, so I can’t tell people when to stop (on second thought, maybe that’s better since runners can ponder for the rest of the race).

My questions? Pro sports teams that don’t end in ‘s’ and 4-letter countries.

Those two questions alone are usually a good 30 minutes of entertainment, but I need more.

The last few miles of pacing a race are always interesting.

There are two common trends I notice as we near the end:

At Santa Rosa, there were 2 groups of guys (5 guys total) who clearly made it their goal to stay ahead of me.

They constantly were looking back to see how close I was getting. I would taunt them every time I started to get close and I threatened to whack them with my pacer sign (my sign was on a thick stick – think paint stir stick width – I was calling it my cricket bat) when I got close to them.

They all finished ahead of me and told me after that my threats of pacer-sign violence was just the boost they needed in those last miles.

Did I Meet My goal

I was consistent throughout the race and was within 10-15 seconds of my split times at every mile.

Ultimately, my race was exactly the kind of race I love to have, especially when I’m pacing – it was utterly uneventful (in the best way). I felt well-trained, well-fueled and well-prepared.

While I got tired and achy near the end of the race, I was never concerned about any possible issues. I could focus entirely on my pace and encouraging and supporting my runners.

I just happen to be running a marathon at the same time.

It strikes me as odd for a wine-country race that runs through vineyards and wineries, has a wine bottle on the medal and a wine barrel on the bib number, that they have a beer fest at the finish with 15ish breweries pouring samples.

My take away from the Santa Rosa Beer Fest?

There is a lot of bad beer out there.

Or at least there’s a lot of beer I don’t like.

I tried 6-7 beers (they were small tastes) and only liked maybe 2.

Another 2 I couldn’t even finish.

Santa Rosa is a big destination for runners wanting to qualify for Boston. In past years, especially when working at the pacer booth at the expo, there was a near-obsession level of focus on Boston – qualifying times, pacers for qualifying times.

The running world’s obsession with Boston has always annoyed me. There is so much more to marathoning and more important things to many runners.

Races going out of their way to cater to runners trying to BQ downplays the experiences of the 95%+ of runners who are focusing on the event that is happening right now to cater to the maybe 5% who are using the race that is happening as a springboard to a different race (don’t get me started on races changing their courses from pretty (but challenging) to flat but boring AF to make them more BQ-friendly for marketing purposes… rant over…).

As a runner who has no interest in running Boston, and who is annoyed by the Boston obsession, I couldn’t love this switch more. I don’t know if it was an intentional shift in marketing or just a fluke, but I really noticed (and appreciated) the decreased focus on Boston this year.

I’d rather answer newbie questions all day than have to deal with one runner who’s upset that we don’t have a pacer at XYZ time because that is HIS BQ time.

The worst part of ultra-training happens tomorrow, as I have to wake up the morning after a marathon and run another 10 miles.

Ugh. I know back-to-back long runs are the key to ultramarathon training, but man they suck sometimes.

Next race: Drag-n-Fly half in September

Next big race: Skyline to the Sea 50k in October

#flatsara is ready for pacing duty at tomorrow's Santa Rosa marathon! Not loving the 90 degree forecast, but other than slather on the sunscreen, there's not a lot i can do about that. #santarosamarathon