There is a ton of advice for first-time marathoners, and a second burst of advice for advanced marathoners who are trying to qualify for Boston. However, I think a frequently overlooked group of marathoners are those setting out to train for their second marathon.

They’ve finished one, so they know they can do it. But there can still be a huge amount of uncertainty and doubt the second time around.

Was the first one a fluke?

Will fill in the blank bad thing that happened in training happen again?

Why did I think this was a good idea to try it again?

Some Advice for Your Second Marathon 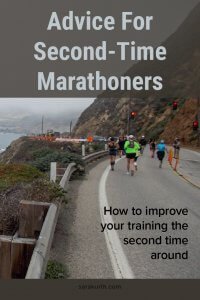 Wait a Bit to Make a Decision

Most marathoners fit into one of three camps after they cross the finish line: those who hated the experience and will never run another marathon, those that can’t wait to sign up immediately for another one, and those who initially swear off marathons as they finish, but who quickly change their minds after the physical pain wears off and only the glow of success remains.

Even if you had a great experience and can’t wait to do another one, wait a few weeks (or months) to make any concrete decisions on what to do next.

Besides, your body needs some time to recover anyway. Go ahead and let your body and mind rest before you commit again. 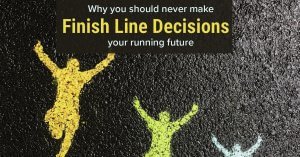 Don’t Rely Too Much On Your First Experience

When planning your training, don’t rely too much on what happened the first time around, good or bad.

If it went well, you may become overconfident the second time around. You may think you know more or are ready for more than you are.

While you have some experience, you aren’t an expert.

If your first time around went poorly, you may not push yourself as much as you could. However, let me take a second and give you kudos if your first training (or race) experience didn’t go well and you are still willing to try again. Well done you.

Review your experience with your first marathon, both in training and on race day.

Did you go out too fast? Hit the wall? Bonk? Did you totally nail your hydration plan?

Keep what worked, and adjust accordingly the stuff that didn’t.

Many (dare I say most?) first-time marathoners set their race goal as ‘just to finish’. Maybe there is a goal time somewhere in the back of their heads, but it’s all about surviving the first time around.

This time, consider a more specific race goal that will inspire you during training.

This goal may or may not be time-based. Possible race goals can include finish or pace times, but they also can include finishing a race with negative splits (completing the second half faster than the first), avoid hitting the wall, or totally rocking that hill on the course.

Also consider setting a series of race goals – a best case, worst case, and realistic case goal. That way, you are ready for whatever may happen on race day. If you only have a ‘best case’ goal, and your race day is less than ideal, you can easily become discouraged.

Use A More Personalized Plan

If you used an off-the-shelf training plan your first time around, consider creating a more detailed and personalized training plan.

With the assistance of a qualified running coach, modify an existing plan or create one entirely from scratch to more specifically focus on your race goals, your training goals, your lifestyle, and your interest in doing (or not) cross training, hills or speed work. 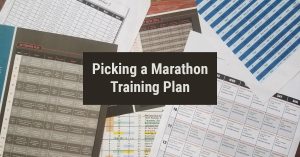 But now you are a veteran. For your second outing, considering adding in speed/track workouts, strength workouts, and hill work.

Don’t overdo it, of course (adding in too much too fast can be a recipe for injury) but when introduced slowly and intentionally and worked into your overall training plan, these additional activities can greatly benefit your running.

I was shocked at how beneficial strength workouts were to my running when I began to do them seriously two or three times a week.

Most runners know they should stretch after a run, but many still don’t.

I’ll confess I’m often one. I’m getting better about it, but I’ve been known to half-ass my post-run stretching.

Find or create a standard post-run stretching plan. And then actually do it.

I’ve found having a set routine greatly increases the odds you’ll do it. When you only have a vague idea that you should stretch, but it’s done in a haphazard fashion with random moves, it becomes easier to skip.

Focus On Fueling, Nutrition, And Hydration

Hopefully, your first time around you experimented with on the run fueling and nutrition and found the right combination of fuels to keep you going during those long runs.

Keep perfecting your on-the-run fueling, but this time around, also give increased attention to your real-life nutrition and hydration.

What you eat in the days and hours before you run can greatly impact your performance. Pay attention to what you eat in real life and how it impacts your running. Adjust accordingly.

Good luck on marathon #2!
Is there anything you would recommend to second-time marathoners?