It’s rare that trifecta of interests comes together.

I recently got the chance to preview the documentary Skid Row Marathon, about an LA Superior Court judge who starts a running program for residents of skid row. I’d vaguely been aware of the story. It’d been featured in Runner’s World (or somewhere, I don’t remember where), but I didn’t know any specifics.

I’m a sucker for ‘they counted me out, but I’ll show them’ underdog stories. They always bring a tear to my eye.

Add in that I was watching this documentary when I was already emotionally compromised (mentally and physically exhausted from my own marathon training long run), and I knew I’d have to have a hankie nearby. 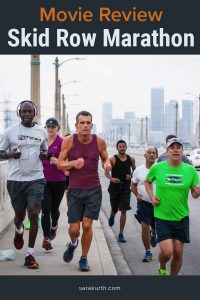 The initial focus of the doc is Judge Craig Mitchell. The weight of his role as a judge clearly weighs on him. He imposes lengthy sentences, sometimes to people who made one bad choice. I got the sense he feels like he needs to do penance for some aspects of his work.

At the invitation of a man he had previously sentenced, the judge visited the Midnight Mission, a homeless shelter on LA’s skid row. When asked by the Mission if there was anything he could contribute to their work, he suggested a running club.

The Midnight Runners were born.

Anyone could join the running club (just be at the front desk at 5:45), and a few residents soon found a passion for running.

The documentary then shifts to focus on a few of the runners who are homeless (or formerly homeless), addicts in recovery, or felons on parole, as the runners begin to train for an international marathon. The judge specifically wanted the races to be international to expose the runners to experiences and opportunities they otherwise would never have.

The first year, 3 runners went to Ghana. As an aside, Ghana looked like my personal worst-case marathon. Hot (over 100), humid, dusty, with a steady stream of buses and trucks spewing exhaust. Nope. But if the goal was an experience, it had it in spades.

The next year, 25 runners ran the Rome Marathon. It says a lot for how much the judge thinks about and admires the runners that he selected Rome, in part,  because one of his long-time runners is an artist and the judge wanted him to see the art there in person.

Anyone who has ever trained for a marathon knows it’s an empowering thing.

The training produces tangible results. You do the work; you finish the marathon.

Marathon training is a straightforward metaphor for overcoming challenges that aren’t as tangible. After a marathon, when facing another challenge you can’t see or define as clearly, you can look to the marathon as a reminder you are capable of amazing things.

This is never more true than for the recovering addicts featured here. Many are clearly trading one addition (drugs), for another (running).

The documentary made clear to me what a universal experience marathon training is. The most privileged and respected judge, a convicted murder, and an addict in recovery all have to do the same work and face similar challenges when marathon training.

While coming from privilege may get you better gear or access to better coaching, we all need to do the same runs and put in the same work.

As a runner, I wish there had been more focus put on the running and the training in this documentary, or that they’d filmed a few more days with the runners. They use the same few running sequences multiple times. It got a little deja vu.

Running was a framing device used by the filmmakers, not really the subject of the show.

Like many cities, my home in Oakland has a huge homeless problem. This doc provided me a new perspective on how quickly ‘good’ or ‘normal’ or ‘responsible’ people can make a few bad choices that can quickly lead to addiction, crime, or homelessness.

It also shows how making even a small investment in people who otherwise wouldn’t be given an opportunity can have an outsized impact and can create a chain reaction of hope and inspiration.

While the focus was on feel-good success stories, the documentary acknowledges the realities of recovery. How easily one misstep while in recovery or on parole can undo years of progress.

I have a new respect for what a daily challenge recovery is.

Skid Row Marathon also illustrates how important having the right people in your corner can be. When trying to get a passport, it was discovered that one man didn’t have a birth certificate. The judge assembled stacks of information from his lengthy criminal record. He argued if the man weren’t a citizen, he would have been deported.

I’m pretty sure you need to have a Superior Court judge in your corner to successfully make that argument.

While the documentary isn’t perfect, it is powerful, and it definitely increased my empathy, even if it could have used a little more running.

Skid Row Marathon will be shown in theatres for one night, October 14. See where it will be showing near you.

Distribution beyond that is unknown to me, but hopefully it will come to a streaming platform near you soon.

Find more info on Midnight Runners, or Back on My Feet (a nation-wide organization with a similar mission).