I love the Skyline to the Sea marathon! This was Skyline #4 for me.

The course is Northern California trail running at its best, starting in the Santa Cruz mountains and heading (not surprisingly) to the coast. While the course drops over 5000 feet total, there are still plenty of ups, climbing nearly 3000 feet.

At my first Skyline outing, I was surprised at how hilly the course was (I had focused too much on the ‘net downhill’ part of the description), the second was the year of the hornet with dozens of runners (not me thankfully) getting stung, and the third was the year of the bloody face plant.

What will outing #4 bring? 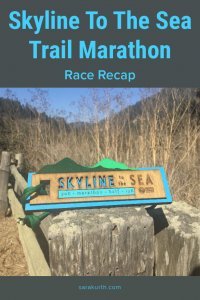 Skyline To The Sea Marathon

I don’t feel terribly prepared for this race, but I can’t put my finger on exactly why. I did all of the training runs (missing only 3-4), and while a few were lackluster, none were terrible.

Oddly, I feel like some of the not feeling prepared is that I don’t feel stressed out enough. I don’t feel like I’m making a big enough deal out running a marathon tomorrow.

Whatever bit of pre-race nerves I do have is knowing I have a recap planned for the blog. If it all goes to hell (as unlikely as that may be), I know I’ll have to report back. It’s oddly reminiscent of when I took the California Bar Exam. I wasn’t afraid of failing, I was afraid of having to tell people I failed.

Wake Up and Travel

For me, a big part of running Skyline is the travel saga of getting to the start.

It is a point-to-point course, so there are two options 1) you have someone drop you at the start or 2) park at the finish and get bused to the start (about an hour drive).

Not surprisingly, I couldn’t talk anyone into getting a 4:30 AM wake up call to play chauffeur, so the bus it is!

I get up, get ready, drive for an hour and a half to the finish, get on a bus and ride for another hour.

By the time the race starts, I’ve been on the move for over three hours.

The advantage of the bus ride is I can rest. I’m a terrible napper, but I still managed to doze off a little. When I woke up, I was momentarily baffled. It took me a few seconds to remember where I was and what I was doing. Finding myself on a school bus filled with runners was a little disorienting.

I noticed this last year, and this year proved it wasn’t a fluke: this race draws a different crowd than other trail races.

Waiting at the start, I was struck by how many runners didn’t look like the usual trail marathon/ultramarathon crowd.

Trail runners often have a look to them. They have an air about them, and they usually carry certain types of gear. This race is different. If it weren’t for the setting, based solely on the crowd, I would have guessed that I was at the start line of a big city road marathon.

I kept seeing runners, many of whom were doing the 50K, that just didn’t look prepared for a hilly trail ultramarathon.

This is neither good nor bad, it’s just an odd little quirk of this race that I can’t figure out.

The draw of this race is the absolute beauty of the course.

Towering redwoods, with the sun streaming in through the leaves, a babbling stream. It is everything that makes Northern California an amazing place to live and run.

What I noticed more than anything this year was the course smelled really good. ‘Pine needles in the fall sun’, ‘verdant redwood forest’. You pick your preferred Yankee Candle candle name, just be sure you buy it.

The unforeseen danger of the course was that many of the trees were dropping these acorn/seed pod things. They made a heck of a noise when they dropped.

I spent a better part of the run afraid one would hit on the head and knock me out (trust me, they were LOUD when they hit the ground). That would hurt!

Two Opinions On The Same Activity

This was the most social trail race crowd I’ve ever come across.

I am of two very distinct minds when it comes to chatting on the run (keeping in mind I’m an introvert and not inclined to chatting for its own sake).

Hate: I hate finding myself directly in front of or directly behind groups of friends who chat with each other non-stop during a race. Listening to running buddies talk about their faux work dramas and relationship woes for hours on end drives me bonkers.

Love: On the other hand, when two strangers meet, run with each other for a while, chat and get to know each other for a bit, then go their separate ways as their runs and paces dictate? That I enjoy. I enjoying doing it and I don’t mind overhearing it. There is a ships passing in the night quality that I find fun.

What’s Happening To Me?

For those of you who have never done a trail run, the course is marked with colored ribbons. If you run more than 10ish minutes without seeing a ribbon, you know you are off-course. In my 10ish years of trail running, I have only missed one turn ever, and today I missed two?

One I just straight up missed (but caught within 100 yards), no harm no foul.

The other lead me (and several other runners) off course for about a third of a mile before some runners came back saying they hadn’t seen a ribbon in a while. With a little backtracking, we found the turn that we all had missed.

The Race Director later said there had been some course marking sabotage. I don’t know if this was the area that he was talking about, but it must be. It was a sharp and awkward turn with very little marking. The rest of the course was so well-marked I find it hard to believe that odd turn would be that lightly marked.

Add in that it was an area with many day hikers not involved in the race, and I have a hunch a non-runner messed with the flags.

My Not Favorite Part Of The Race

The first few miles of the race were waaaay more crowded than I like. I had 6 hours to consider why this was. Here’s what I figure:

I got the sense I was much nearer the middle of the pack in this crowd. I haven’t gotten noticeably faster (I finished within 5 minutes of last year’s time), but I think more 6+ hour trail marathoners have joined our ranks.

While I’m happy that slower runners are hitting the trail and finding the joy and the beauty of it, part of me selfishly doesn’t like it since it means I have to share.

A Not Great Way To End The Day

Not race related, but a big part of the day regardless: The drive home was a nightmare!

While the 5:00 AM drive isn’t great, it has one major upside: no traffic. Predictably 1.5 hours door to parking lot.

The drive home was nothing but traffic. It took me nearly an hour just to get through the small town of Half Moon Bay.

I was exhausted from the run, tired from the 4 AM wake-up call. While they had good food at the finish, I was hungry, and every new road I hit turned into a new traffic jam.

I was nearly in tears. It took me almost three hours to make it home.

And once I got home, I’d been sitting for so long every muscle had stiffened up and I could barely move.

I am proud to report I remained 100% vertical!

I didn’t look around a lot while running (see my concerns about goal #1), but I did pause more to look around and appreciate where I was.

The finish time on my watch was 6:00:20. I consider 20 seconds to be well within the margin of error to declare victory.

Although, after having run it the last three years, I may take next year off to try a new fall race. The beauty of this run is almost commonplace to me now.

I may need a year off so I can really appreciate it again.

That Dam Run Trail Half in Auburn, CA at the end of the month.

I do love a good race pun.

One thought on “Skyline To the Sea Trail Marathon: Race Recap”