I spent most of the week staying in my childhood home, spending time with family and running down memory lane.

I then left home to go home (I consider both Minnesota and Oakland home) just in time to wallow in a massive heat wave. Temperatures over 100 degrees in Oakland!? Unheard of.

I’m used to sweating buckets when running, not when just sitting around the house.

I’m entering peak mileage. I haven’t been knocking it out of the park with my goals, I likely have a success rate somewhere around 75%. I’m ok with that. I feel like I’m doing a good job separating the ‘need to do’ goals necessary to keep me on track and the ‘nice to have’ goals that I can bail on when necessary.

Each week in training I want to: 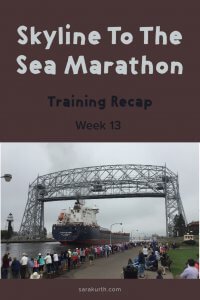 I took the parents on a little getaway to Duluth, so more sitting in the car today than anything I’d call exercise.

The clouds and rain have moved on and it was a largely blue sky for the drive, which was a nice change of pace after a gray few days.

This is likely the best temperature I’ve ever experienced in Duluth, so I took a walk along the Duluth Lakewalk to the Lift Bridge before spending time sitting by the hotel fire pit eating s’mores in the cool night air.

Did my morning run while still in Duluth, on the Lakewalk.

From our hotel (the Inn on Lake Superior – highly recommend when visiting Duluth), the path goes along the shore of Lake Superior. So pretty.

Not long after my run, a boat arrived into port going under the Duluth lift bridge. It’s really is kind of amazing to watch the big monster boats arrive through the little narrow channel 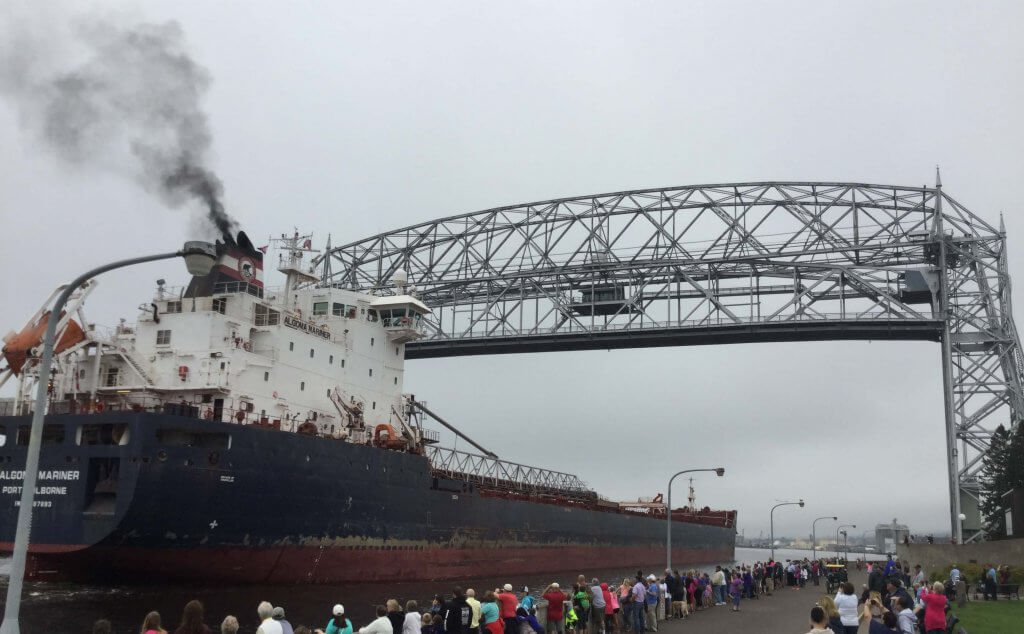 My run down memory lane continues, this time back to Lake Harriet to the elf house on the far side of the lake. Nearly 20 years later, it looks like the elves are still living there and are being taken care of by the locals. #seenonmyrun #lakeharrietelfhouse

Back in the Twin Cities, I did another run to Lake Harriet. But instead of turning left to the bandshell, I turned right to run to the elf house. What started as a single little door by the base of a tree decades ago has blossomed over the years to be a full-fledged elf estate.

I also threw in a few hill repeats at the Beard’s Plaisance, because that is just what you do when you run at Lake Harriet.

I hadn’t planned on doing yoga, but I thought I’d show my mom how to use the Nike Training Club app on dad’s new iPad so we ended up doing the 18-minute Yoga Ready.

Way more time in plank than I remember.

A thing I do when I’m home is become slave labor- helping with whatever bigger chores need to be done around the house. This time I channeled my inner-lumberjack and helped trim dead branches from all the trees in the yard.

One last run to Lake Harriet during this trip home. It was fun reminiscing but back to real life #seenonmyrun #RUNderfulworld

One final run to Lake Harriet.

It was fun visiting my old haunts. Even better that it wasn’t the typical super hot and humid temps that you get during Augusts in Minnesota.

I blinked and I think I missed August. Where did it go?

Woke up in the middle of the night with an on-coming charley horse in my calf. It was one of those cramps that still hurt a little bit the next day.

I broke out the Asana Rebel app this morning to do their 5-minute daily workout. Felt good and stretchy.

Hot AF forecast, so I swapped the hilly course I’d planned for a flat one and started today’s run well before sunrise. I just wasn’t in the mood for heat stroke. Already 94 when I finished at 10 am. #urgh #survivingtheheatwave

When I got home from Minnesota, Northern California was just kicking off a major heat wave. In looking at the forecasts for today, I’ll admit it: it scared me.

The prediction was for 100s in Oakland, upwards of 114 in the inland areas. Adding to the misery was smoke from far away forest fires are creating a haze over everything and poor air quality.

And I am scheduled to run 19 miles.

I decided to trade the hillier route I’d planned for a flat, boring route. Not dying of heat stroke must take precedence over my goal of getting in elevation gain.

I also decided to start my run god-awful early, taking advantage of some of the cooling overnight. So I set my alarm for 5 AM (urgh) and was running by 6 AM (when it was a relatively cool 75), well before sunrise. The one upside of running so early – I was done by 10! (when it was already 92).

The run itself was uneventful. It was getting warm near the end, but the haze in the sky, while not great for the lungs, kept the sun from having its full blazing impact.

Today is supposed to be the worst of the heat. Fingers crossed it’s true.

The heat wave has left me grumpy and disinterested in working out.

I did do the Rebel Asana daily workout and a little more walking than I’d do with temps in the high 80s (luxuriously cool after yesterday’s highs in the 100s), but no real cross-training.

I dropped the ball on stretching this week, but the fact I was 100% on the running between traveling and a killer heat wave is a big success.

Running in Minnesota was a fun change of pace, and I’m really glad I had the chance to run on those routes again.

Heat waves always leave me miserable, and this one is no different.

Hydration. The heat wave is really doing a number on me.