I hadn’t planned on running or racing this weekend. I sure hadn’t planned on pacing. But a post came up late last week in a running Facebook group that I belong to, desperately looking for pacers for the Sutter Buttes Spirit Mountain Half Marathon. 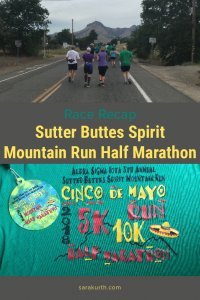 I haven’t run any real distances since the Oakland Marathon in March. I’m running regularly, but more maintenance runs than distance training. I’ve also been doing Bar Method classes three times a week, so while I haven’t been a total slug, I’ve been light on the running.

I’ll have to trust my muscle memory for this one. I’m pacing the 2:30 group, which is a time I’ve paced before, so I’m confident I can run the distance and the pace, even if I’m not ideally trained.

In the days before the race, I couldn’t remember the name of this race. For reasons I can’t figure out, I got it into my head that it has ‘Mesa’ or ‘Bluff’ in the title.

post-race note: Now that I’ve been there, it’s a totally easy name to remember.

I’ve never been to this part of California, so I googled Sutter Buttes and discovered it’s the ‘smallest mountain range in the world,’ an ancient volcano, and large parts of it are a state park that is not open to the public.

As a lover of factoids, be still my heart! I managed to learn three new things in less than a minute! This is going to be my kind of place.

And why yes, I did read the USGS flyer on Sutter Buttes, why do you ask?

Wake-Up And Drive To

Sutter is about a 2-hour drive for me.

Since this race was so last-minute, all the reasonably priced hotels and Airbnb in the vicinity were booked.

I could have gotten a hotel further out, but at a certain point, if a hotel is still going to be an hour drive away (with a poor night’s sleep in an unfamiliar bed), I may as well just stay at home, sleep in a familiar bed and endure a super early wake-up call.

The major upside: there is zero traffic at 4:30, making for a super easy drive.

I got my first view of the buttes driving in. I’d been driving in super-duper flat farm country with the Sierras way out in the distance for quite a while, then suddenly these ‘mountains’ pop up out of nowhere.

It’s been awhile since I’ve done a small road race.

All of our pace groups were small, but that can happen at any race (I’ve been a pacer with no runners at large races, it’s always a bit of crap shoot how many runners will be in a group).

I did have one runner with me for most of the run, so we had a great time chatting. I can’t remember how it came up, but she was telling me about the kid’s book Mike Mulligan And His Steam Shovel. Look for that story being an analogy for something in a future post.

I hadn’t seen a course map or an elevation chart before the run, and maybe that was for the best.

I was surprised that this course climbed nearly 500 feet, all of it the slow, gradual climbs that I’m not great at running. If I’m trail running and I hit a steep hill, I walk up it. If it’s flat, I can run. But slow, gradual hills can mess with me. They aren’t steep enough to walk, but they are steep enough to be a running (and pacing) challenge.

This race is an out and back course on a highway (county road?) that runs along the Buttes. I usually don’t like out and backs, but because of the buttes and the way they are arranged, it looked totally different going the other way.

If it weren’t for runners going the other way, I wouldn’t have even noticed it was out and back.

And after the turn-filled Oakland Marathon, a race that had 1 turn-around was a welcome relief.

Biggest Laugh Of The Race

Early in the course, we passed a farm. This was the conversation amongst the group I was with…

Then a lady told me to look out for the zonkey.

The zonkey: A zebra, donkey hybrid. The laugh this gave me was worth the 4 am wake up call and 2-hour drive.

Physically, I was great, but I wasn’t in a half marathon, racing, or pacing mindset. I was a little off my game mentally. I hadn’t prepared properly, and I didn’t do any of my usual pre-race routines or rituals.

Lesson learned on the true power of my little pre-race rituals.

An unanticipated upside of a small run? I came in third in my age group!

Full disclosure, I was 3rd out of 4, but who cares!? I’m not gonna let cold hard facts get in the way of a victory celebration and an age group medal!

This race had the best runner goodie bag I’ve had in a while. It seems like fewer races are doing goodie bags, but maybe it’s just the races I’m doing.

This one had almonds, walnuts, various bars, a little ice pack thingy. I’m glad I looked into the bag while still in town – there was a coupon for a free coffee drink at a local coffee shop.

Ear Worm Of The Day

I haven’t watched Moana in months.

Why this song picked today to bounce around in my head for two hours is a mystery.

This race was part of a city festival – Sutter Butte Day.

The first event of the day was the race. Then there was a parade, which was mostly community groups throwing candy. This is almond growing country, so a few were throwing packs of locally grown Blue Diamond almonds – I fought the kids for those.

There was also a community fair. My favorite booth handout was from a local rice farmer who is running for Supervisor and gave away bags of (his) rice as his campaign freebie. I don’t know anything about this man, his platform or his politics, but I can confirm the man knows: 1) a good give-away 2) his rice.

Did you know California is a huge producer of short-grained sushi (sticky) rice? I didn’t before, but I do now. (more factoids!).

It was also opening day for the city pool, so they had ‘boat races.’

Kids make ‘boats’ out of cardboard and duct tape.

It was all very Mayberry.

I had intended to stay and enjoy the festivities ironically, but in spite of myself, I had a sincerely fun time at Sutter Butte Day.

The word I keep coming back to with this race is fun.

I had fun running it, I had fun pacing it.

It was low-key but well run, was a (good and surprising) challenge, with really pretty scenery. What more do you want in a race? 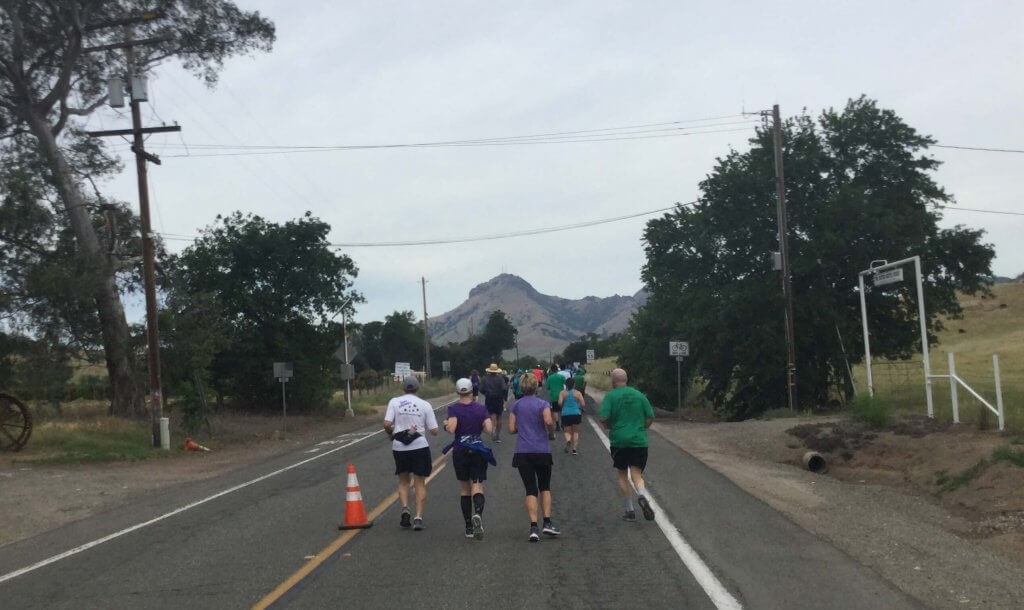 My running off-season continues as I still have more race volunteer shifts on the calendar in May than races to run.