I divide the people in my life into two major categories: runners and non-runners.

The runners I largely know through various running clubs and fitness classes. With these people, my conversations are largely running focused: What are you training for? How did your last race go? Are you still going to that weekly group track workout?

With my running friends, I may not know their last names or what they do for fun when they aren’t running, but I know they prefer [amazon_textlink asin=’B0781VL6PY’ text=’birthday cake’ template=’ProductLink’ store=’sarakurth-20′ marketplace=’US’ link_id=’0fa7bdce-5295-4738-9b80-8031e3a7511c’] GU on the run and peanut butter filled pretzels as a post-run snack.

Then there is everybody else: the non-runners, the people I know in professional or volunteer capacities.

They usually know I’m a runner (and if they don’t, I try very hard to casually throw into a conversation that I’ve run over 30 marathons and recently a 50 mile race… the looks are priceless), and they ask the vague questions you ask of someone who is into something you know nothing about.

All runners know the questions:

Some runners get upset by these questions. I’m usually amused by them and appreciate the effort of them trying to take an interest in my hobbies.

Their questions about my running are likely no worse than my questions to them about whatever their interests are.

I want to be polite, but there isn’t much I can ask them about the big football game (“That’s the one with free-throws, right?”) or the opera they went to last night (where I’ll likely try to make some joke about the fat lady singing that is neither funny nor original). 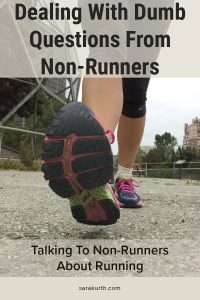 Dealing With Dumb Questions From Non-Runners

What you need to remember when talking to non-runners about running:

Before you roll your eyes, groan, and once again explain the difference between a marathon and a 5k, ask yourself:

Know your audience. Is this person a runner or interested in fitness?

You can usually tell the difference between some who honestly cares (and would get the question right if they knew better) and someone who doesn’t really care.

If the question is the smallest of small talk with someone you barely interact with and is likely only to prevent an awkward silence at the coffee maker with someone who only knows one thing about you (that you run), it’s likely not worth your time or effort to either correct them or explain why the question is wrong.

What If The Roles Were Reversed?

After someone asks you a really stupid question about running, this is the perfect moment for empathy.

Imagine the roles were reversed and you were the person asking questions about something the other person was interested in (something you know nothing about).

Would your questions on that topic be any better or more informed?

Is there any reason they should know more about the topic they are asking about?

If you’ve only talked about your ‘race,’ distances may mean nothing to them.

How To Respond To Stupid Questions

There are a few different approaches and ways to respond to stupid questions from non-runners.

As any woman who has been on the receiving end of mansplaining knows, nothing good has ever come from a sentence starting with ‘Actually.’

No one likes a pedantic know-it-all.

Correct Them (As A Teaching Moment)

Q: “How was your 5k marathon this weekend?”
A: “I did a 10k and it went really well. I felt really strong. All my training really paid off”

Q: “How was your 5k marathon this weekend?”
A: “My race was great. How was your taekwondo tournament on Saturday?” 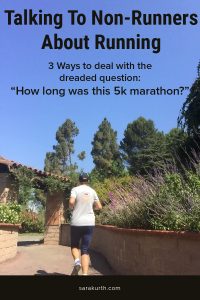 What about you? What question from non-runners makes you cringe?