I often talk about ‘knowing your why’ before you begin training for a marathon. Having a ‘why’ is super important for any undertaking in life, but it is especially true for marathon training, mostly because of the sheer volume of time and energy required to see it through.

Everyones why is different and personal.

Some ‘whys’ are important and meaningful (health reasons or to set a good example for children, for example). Other whys may seem trivial to outsiders.

For the most part, I don’t think there are ‘right’ or ‘wrong’ whys. If it works for you, work with it. Who cares if no one else understands your why?

Who are they to judge what inspires you?

That said, there are a few whys that rarely work for marathon training.

They just aren’t strong enough to keep you inspired through 16 or 18 weeks (or longer) of training.

[2020 Note: I’ve gotten a few comments on this post that make me think my intention with it wasn’t clear. I firmly believe anyone who wants to run a marathon can do so. With this post I’m NOT saying if one of these whys is the reason you’ve decided to start training for a marathon you can’t or shouldn’t train. Instead, that you should really consider the marathon and the effort required to train for one and be honest with yourself about the amount of effort you are willing and able to commit to training.] 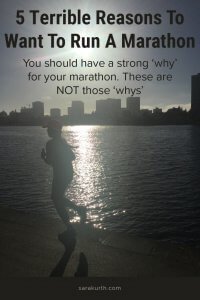 I won’t lie, I love being able to say I’ve run a marathon. One of my great little joys in life is getting to drop into casual conversation that I’ve run 28 marathons.

But if your main driving force for wanting to run a marathon is bragging rights, there are much easier ways to do that.

Maybe run a half marathon. Non-running people will likely be just as impressed, and running people probably wouldn’t have been that much more impressed by finishing a full anyway.

Bragging rights are a great perk of finishing a marathon, but not a very strong why.

Because ‘It’s What Runners Do’

There is a natural progression to running.

When we start, most of us can’t run a full block. But you keep working at it and you get stronger. Eventually, you can run longer or faster.

It can work the same way with racing.

Many of us start by running a 5k. Then move up to a 10k and then a half marathon. The natural progression seems like it should all lead up to a full marathon.

You may not even think consciously about the progression in race distances. After all, if you’ve been running for 5 (or whatever number) years, and you’ve done a few half-marathons, a marathon is the obvious next step, right?

For some runners, it will be. But it won’t be (or shouldn’t be) for others.

Not every runner has the temperament to run or train for a marathon.

That isn’t good or bad or right or wrong, it just is.

This may sound silly to even say, but make sure you’ve consciously made the choice to run a marathon.

Make sure your why isn’t just an unconscious progression of race distances.

This one really could go either way.

If it’s on your bucket list because it’s something you really want to do, great, do it (and yes, I see the circular logic there, but work with me…).

However, if it’s on your bucket list because once upon a time, years (or decades) ago, when you put the list together, you thought it was something that you might want to do, or you thought it was the kind of thing that should go on the list, take another second to consider.

Is your why a real goal, or are you just looking to cross something off a list for the primary purpose of crossing it off the list?

Even if a marathon was a sincere, desired goal years ago, goals change.

Is this still a current goal?

You Want To Lose Weight

Marathon training seems perfect for weight loss. Running all of those miles every week, the pounds will just fall off, right?

Unfortunately, that is often not the case. You will have to consume many more calories to fuel all of those miles, and you’ll likely retain more water as your body tries to figure out its needs.

In fact, many runners (me, for example) gain weight during marathon training, especially in the first few weeks of training.

There are much easier (OK, maybe not ‘easy’, but more likely) ways to lose weight. 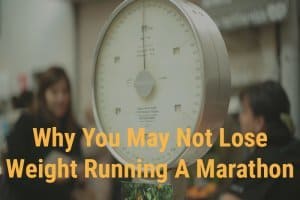 Much like ‘because it’s what runners do,’ this one could be unconscious and may suck you into training before you know what is happening.

YOU are the one who is going to have to run all of those miles.
YOU are going to have to put up with the chafing, the muscle soreness and consume endless packs of GU (wow, I really know how to sell training for a marathon, don’t I?).

Make sure YOU are the one who is making the decision to do it.

What about you? What ‘why’ worked (or didn’t) to get you through marathon training? 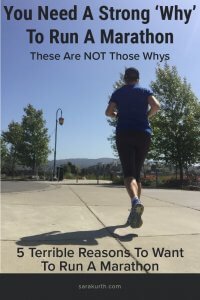