I was supposed to be the leader of the 4:40 pace group at the Oakland Marathon on March 22.

Then, I was supposed to write a recap of that race in this blog post.

So many ‘supposedas’ aren’t happening the way they’re supposed to these days.

The Oakland Marathon is no different. 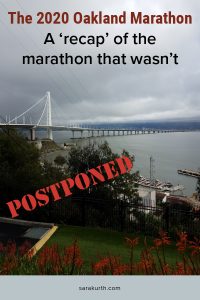 The 2020 Oakland Marathon – The Race That Wasn’t

A few weeks before Oakland, the first race cancellations and postponements started when both the Tokyo and Paris marathons were called off.

My first thought was it sucked for those who trained and planned major international travel. But it made sense since those races are huge and draw people from around the world.

Surely those same concerns don’t exist for my little race.

But things escalated quickly, and it wasn’t long before the Oakland Marathon too was called off.

The Race is Off

As a runner, I wasn’t too upset by it.

I’d already run my main race of season, the Salmon Falls 50k just a few weeks before. In my mind, Oakland was an ‘oh yeah, that’s happening too’ race. I knew I’d enjoy pacing it, but my personal reaction was a resounding meh.

However, I’d also been a coach and pacer for my running club’s marathon training program.

Most of those runners had Oakland as their goal race. We’d been doing long runs together since Thanksgiving, and for many of them, Oakland was going to be their first marathon.

They were so close.

I was heartbroken for them.

I was much more upset by their situations than I was my own.

I usually plan blog posts a month in advance, so when looking at my editorial calendar last week I saw ‘Oakland Marathon Recap’ staring back at me.

Forget Oakland entirely and dust off a half-formed draft? So many of which, I now realize, focus on some aspect of race prep, which is a little too salt in the wound to post today.

Or maybe draft something new, trying to give advice or a positive spin on our current situation?

But then I realized I’m still processing what is happening, both in running and in the wider world.

The best way for me to process stuff is to write about it, so I decided to write a ‘recap’ of the race that wasn’t.

While I call this little website a ‘blog,’ other than race recaps, I don’t do much traditional blogging (personal essays and opinions, that kind of thing), so I hope you’ll all indulge me just this once.

After Oakland was called off, the running club began discussing alternatives. We could run the Oakland course on race day anyway. Or join up with a local running store that was now going to host an event on race day doing multiple laps of Lake Merritt.

Some runners talked about doing a marathon distance at locations like the Iron Horse Trail or the Alameda Creek Trail where we had done training runs.

Ultimately, we decided the club shouldn’t be organizing anything for any number of legal, permitting, and insurance reasons.

I thought the people who were considering running the Oakland route anyway were kind of silly because… well… the Oakland course isn’t very good.

It is a course pretty clearly designed with one simple question in mind: what roads can we shut down on a Sunday morning with the least amount of disruption to non-runners as possible?

How enjoyable or scenic the course is for runners doesn’t seem to factor into the equation.

An Oakland Marathon Aside

I have a complicated relationship with the Oakland Marathon.

I’ve lived in Oakland for nearly a decade and while it has its problems (what town doesn’t?), I love it. I also love running marathons, so I want to love the Oakland Marathon.

But it just keeps letting me down.

And I keep giving it one more chance.

The race directors are based on the East Coast and other than a spouse of a former employee (so the story goes) had no connection to Oakland when they started the race and didn’t really know the area.

In past years, they’ve had terrible supply issues (in 2018, I finished pacing the 5 hour group and was greeted by dozens of empty food tables and a half a banana. They’d long since run out nearly all food at the finish).

That same year, they’d changed the course from a challenging but beautiful tour of Oakland neighborhoods to flat, random loops of downtown and the port (now a great Boston Qualifier! the marketing materials now read. Don’t get me started on races catering only to those interested in a BQ – even I can’t handle an aside within an aside). The change was made without warning and less than a month before race day.

It all felt so disrespectful to the runners.

It has gotten better in the last year as they’ve hired local staff (what a concept), so I keep giving one more shot.

I considered dusting off the old Oakland course that goes up into the hills and actually ventures into Oakland neighborhoods, but that course wasn’t perfect either.

However, it did get me thinking – what if I was in charge? I know what Oakland routes I don’t like, but could I do better?

I ended up writing a little Oakland Marathon fan-fiction and created the route I wish the Oakland Marathon ran. It actually ventures into neighborhoods and shows off the variety, history, and diversity of Oakland.

Sure, it’s a tougher course than the actual course, but for those of us who don’t care about a BQ time, a challenging course is an asset, not a liability.

A few runners from the club were going to join me on what would have been race day.

What would have been marathon week, the Bay Area was put under a shelter in place (SIP) order.

Running was still allowed, as long as you remained at least 6 feet away from people not in your household.

Suddenly, going for a run became an ethical dilemma.

Even with the best of intentions, it is hard to stay 6 feet away from running partners (if you are in a group) or strangers (if you are alone, but running anywhere near other people).

The first day under the SIP, I went for a walk. There were far fewer cars on the road, but the running path was packed. Way more people than normal were walking and running Lake Merritt.

Staying 6 feet away from anyone was impossible.

Seeing so many people out and about left me feeling anxious and exasperated.

My thoughts would spiral from there.

Ultimately, I’m finding it easier to stay entirely inside with only a walk in the 2 (entirely residential) blocks surrounding my condo.

I can’t control that so many others are ignoring the order, I can only control my ability to see them.

As the SIP orders expanded across the entire state and as the scope and severity of coronavirus became clearer, a 26 mile sojourn across the city suddenly felt entirely wrong to me.

Other runners who’d planned on running with me were concerned about the potential impact of the run on their immune systems.

There would be no DIY Tour de Oakland Ultra Oakland Marathon (ultra only on a technicality, the course I put together was 26.8 miles) on what would have been race day.

I’m taking the SIP order as the universe’s way of telling me I need to rest. My hamstring was occasionally twingy while training for Salmon Falls. While it never was a major issue and was addressed by a few day’s rest during training, additional rest can only do it good.

I’m itching to get back on the trails, but by all accounts they are ridiculously crowded (seriously people, this is a pandemic, not a hiking vacation!), so I’ll stay away. If the crowds continue, it’s only a matter of time until they close too, anyway.

So I’ll continue to be a good citizen and stay inside, take short walks in the neighborhood, and do my Openfit barre classes every day.

When the time comes to run again (and it will), the trails will be ready.

My tour de Oakland course will be ready.

And the fresh air will feel so good.

Stay healthy, stay safe, and for heaven’s sake, stay inside!