The podcasts, articles, shows, gear, and other stuff that is making me happy and making me smile.

The Things I Love

It was both marathon week and my birthday week, so I’ve been a bit more distracted than usual.

I haven’t been trying many new and exciting things lately, in the weeks before a marathon, I stick pretty close to home (literally and figuratively).

So the things I love this week are pretty tried and true stand-bys.

The featured picture this week is of Mira, a cat that was up for adoption at Hopalong Rescue Services, where I have a regular gig taking care of kittens waiting for their forever homes. While don’t like that there are kittens in the world without homes, I selfishly love that it is nearly kitten season – they are so freakin adorable.

The Lore podcast is hosted author Aaron Mahnke. It is described as covering the frightening history behind common folklore.

History and folklore, all in one? How great is that?

Lore is great at setting the scene, very spooky and atmospheric.

I love the very subtle background music. Early on, he used a few songs from Olafur Arnalds, one of my favorite composers. If it weren’t for my already being familiar with the music, I likely wouldn’t have even noticed the music, it’s so subtle.

It was recently announced that Lore will be expanded into a television show on Amazon. I’m so looking forward to that.

Having just passed my birthday, I’ve had cake on the brain. I am a bit of cupcake connoisseur, and my absolute favorite is Sift Dessert Bar’s Samoa cupcake.

Based on the Samoa Girl Scout cookie, it’s a vanilla cake, with a chocolate ganache filling, caramel frosting topped with toasted coconut and a chocolate drizzle.

They are utterly amazing.

There are several Sifts in San Francisco and in the Napa area. Thankfully, there aren’t any Sifts too close to me or my scale wouldn’t be very unhappy.

I once paced a half marathon in Napa because the finish line was near the Sift in downtown Napa.

I think I’ll have to make an outing soon to have a belated birthday cupcake.

I hate being thirsty on a run. On any run over about an hour, I carry a hydration pack. I love both having the water, especially during hot summer long runs, and having extra pockets for fuel and other gear.

My pack of choice is the UltrAspire Alpha. Mine is the Alpha 1, which I guess they don’t make anymore, but they now have the Alpha 2, which, as far as I can tell, is the same except for a new style of front closures.

There are tons of little pockets (most easily accessible on the move) for gels and empty gel packets. A waterproof pocket for salt tabs, a zipper pouch for keys. The front pockets can either hold more fuel, a cell phone, or extra hydration if you want a little sports drink (Nuun!), in addition to the 2 liters of water that are in the pack.

What We Do In The Shadows

What We Do In The Shadows is pretty much on repeat in my DVD player.

A mockumentary about Vampires living in New Zealand, it is from Jemaine Clement and Taika Waititi (of Flight of the Conchords and Boy). I find something new to laugh at every time I watch it (‘…werewolves not swearwolves’ gets me every single time).

It is totally absurd and utterly hysterical.

I so hope they make the follow-up TV show featuring the bumbling, but well-meaning, Mulder and Scullyesque cops that has long been rumored.

It is now streaming on Amazon Prime.

Or buy it and all but burn a hole in the DVD like I’ve done with mine. 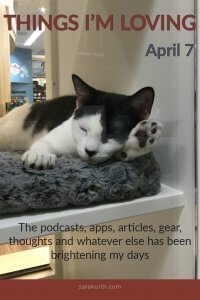