Welcome to the things I love for May 19th! The podcasts, articles, shows, gear, and other stuff that is making me happy and making me smile. Read previous Things I Love posts.

The Things I Love

A mixed bag of stuff this week.

I’ve used Strava for a year or so to track runs, post runs on Instagram, be part of a few running clubs, and follow some online running friends.

You can use Strava to track runs too, but I have it upload my run data from my Garmin. Garmin has a similar app (Garmin Connect), but I find their interface a bit awkward to use.

My favorite aspect of Strava is checking out the feed of other runners I follow. I belong to several virtual running clubs (I’ve mentioned the Hogwarts Running Club, haven’t I?) which have members all over the world.

By default, a map of the route you ran appears in the social feed (if you are concerned about privacy, you can easily change this setting). As a bit of a map nerd, I love reviewing other people’s runs and checking out the exotic (to me) locations.

The everyday runs of some club members are along the Thames in London, on Sydney Harbor, or some small town in India that isn’t on any map.

I look at those routes and wonder if they find them as ordinary as I find my usual run routes. For me, an everyday run is in San Francisco across the Golden Gate Bridge. It’s nice, but it’s just another bridge run.

Do others look at that route and think about how amazing it must be?

I love coffee, but for me, one mug is enough. Making a full pot of coffee would go to waste.

I like the idea of the single-serving K-cups brewers, but I am appalled by the amount of waste they generate. I like my french press, but it’s a little annoying to clean

Then I tried the Aeropress. The Aeropress is a single serving coffee maker. You steep the grounds and press it down. It’s the same general idea as a french press, but much easier to clean. I’m no connoisseur (I’ll drink whatever I’m given), but my friends who know coffee insist it makes a mighty fine cup of coffee.

Add in a bunch of caramel macchiato coffee creamer from International Delights and I’m set.

I know flavored creamer isn’t particularly classy, but I think it’s better (and cheaper) than going to Starbucks every day, so I refuse to feel bad about it.

My known writing weakness is self-editing my work.

I swear I read, re-read, and re-re-read all of my posts before they are published, and yet, the occasional really stupid typo and misspelling will still make it into print.

What can I say, I often read what I meant to write, not what I actually wrote.

Grammarly is a Chrome browser extension that checks your spelling and your grammar. It catches way more than the WordPress or Microsoft spell checkers.

While it is far from perfect, it has caught many (really silly) typos before I hit ‘publish’.

I also feel a burst of pride when they send out the weekly summary of how many words I wrote in the last week. I often have written more than 95% of all Grammarly users.

About a month ago, I volunteered at an aid station for a 50K trail run. Aid stations for trail races generally have pretty good grub and the 50K aid station was no exception.

We had the usual chips, fruit, pretzels, and the Payday bars I love so much (at least when volunteering). But there was also banana bread, peanut butter and jelly sandwiches and boiled potatoes to dip in salt.

A fellow volunteer introduced me to something I can’t believe I hadn’t tried, and I’m embarrassed to say I’d never thought of: spreading peanut butter on an Oreo.

A few years ago, they made Peanut Butter Oreos. They were OK, but they didn’t knock my socks off.

But this? This was amazing.

It was like an Oreo and a Nutter Butter had a baby. 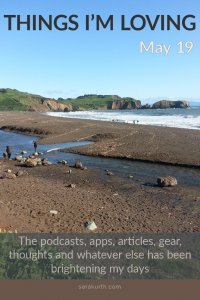